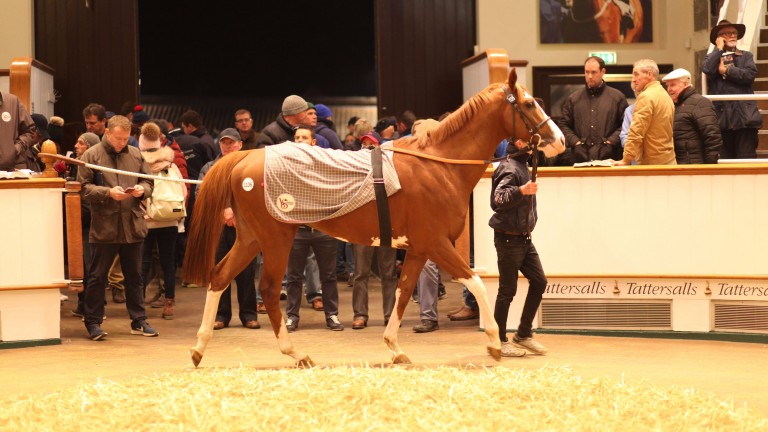 A marathon session of the Tattersalls Autumn Horses In Training Sale on Wednesday brought with it a further reminder of the international appeal of British and Irish bloodstock, as parties from all corners of the globe drove prices upwards at Park Paddocks.

The session was topped by the striking Solomon's Bay, with Rupert Pritchard-Gordon getting one up on Anthony Stroud with a bid of 390,000gns to claim the progressive son of Exceed And Excel, who was offered by Roger Varian's Carlburg Stables.

The three-year-old won three races for Varian, including this year's Listed Surrey Stakes and a Kempton conditions event on his most recent outing, where he touched off the classy Blue De Vega.

"He's been bought to go to Hong Kong," said Pritchard-Gordon, who secured Solomon's Bay on behalf of an undisclosed client. "He's a horse that's versatile, he can go over six furlongs or a mile and has plenty of speed. He's got a profile that looks geared towards the programme over in Hong Kong. He won't be running again here, that's for sure."

The colt was bred and raced by Prince A A Faisal, and is out of the Sadler's Wells mare Gentle On My Mind, a sister to the dam of Taghrooda and from the strong Aga Khan family of Estimate and Ebadiyla.

"He hasn't done a lot wrong - he's a three-year-old with a bit of class and a high rating," continued Pritchard-Gordon. "He's a horse with recent form and looked in great shape. He's got plenty of experience but hasn't been over-raced so hopefully he'll have a future over there."

Earlier in the session Pritchard-Gordon went to 310,000gns to land dual winner Melting Dew from the Juddmonte draft.

"He'll stay in England, though I'm not sure yet who will train him, that's for my client to decide," said Pritchard-Gordon.

"Hopefully he'll be a nice horse for the good mile-and-a-half handicaps next season. He's a good stamp of a horse, an athletic colt - a great goer. He still has some maturing to do. The family all improve with age and this colt has plenty of size and scope so we're happy to get him."

The three-year-old son of Cacique earned a peak Racing Post Rating (RPR) of 95 from ten starts for Sir Michael Stoute, and is a half-brother to Nassau Stakes heroine Winsili and from the further family of Group/Grade 1 winners Meteor Storm and Polish Summer.

Having finished underbidder on a number of noteworthy lots over the opening two sessions of the sale, Guy Mulcaster got on the scoresheet early on Wednesday when getting the better of Alastair Donald for the progressive stayer Brimham Rocks at 340,000gns.

The three-year-old son of Fastnet Rock, who was bred and owned by David and Vimy Aykroyd, has won four races for Ralph Beckett during 2017, improving his RPR by 40 lbs in the process. He was last seen winning a York handicap over 1m6f, and now heads to Australia to join the yard of Chris Waller.

"It's been a struggle this week but that's the joy of an auction!" said Mulcaster. "He'll go back to Australia and go back into the system like the rest of them - we don't have any huge targets for him at the moment, we'll just see how he acclimatises and take him along step by step. It's worked in the past and hopefully it'll work again."

Mulcaster was understandably delighted to have secured such an upwardly mobile recruit, particularly as the horse had been on his radar for some time.

"We identified him back in August and tried to buy him then but weren't able to," he said. "But we've been lucky enough to get him here. He came from a good stable and I know Ralph really liked the horse, so will be disappointed to lose him."

Mulcaster went on to make a number of six-figure acquisitions on behalf of Waller as the session progressed, including the useful Naval Warfare for 160,000gns, the two-year-old Tansheet for 110,000gns and the three-time winner Opposition at 100,000gns. 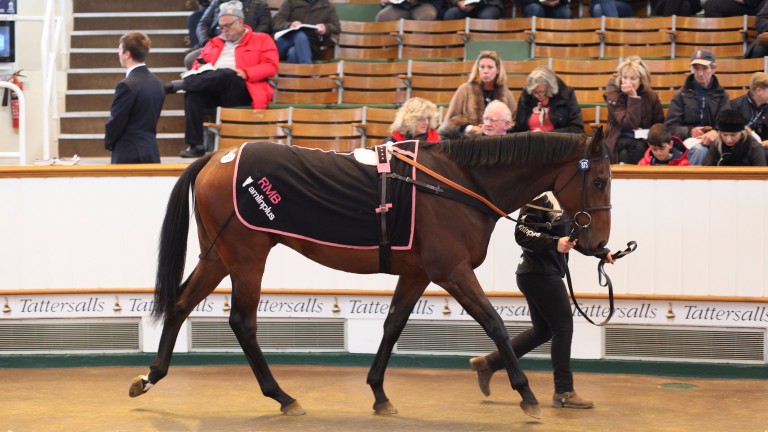 Another lot to break the 300,000gns barrier was Frozen Angel, who went the way of former Hong Kong-based trainer Sean Woods at 335,000gns. The son of Dark Angel, a £165,000 yearling owned by Michael Owen and Tom Cleverley among others, proved to be a useful juvenile, having finished a close fourth in the Norfolk Stakes and runner-up in the Prix Robert Papin.

Saudi Arabia's King's Cup has gone the way of Prince Faisal bin Khalid on no fewer than 16 occasions, and the owner will be hopeful of landing the prize again having parted with 260,000gns for Alwahsh from the Shadwell draft after his representative Ted Voute outbid the likes of Luca Cumani and Guy Mulcaster.

The three-year-old Dubawi colt broke his maiden in June and was last seen running a creditable third in a big field York handicap.

"He's just a beautiful horse and hopefully he's one for the King's Cup," said Voute. "He's a mile and a quarter horse, which you need, and they have to be rated 85 or above."

Also on his way to Saudi Arabia is Pharaonic after Voute went to 230,000gns for the Juddmonte-consigned colt. The three-year-old son of Dansili is a half-brother to Prix du Jockey Club winner and Ballylinch Stud resident New Bay.

Sackville Donald continued to play at the top of the market, and by the close of Wednesday's session topped the buyers' table by total spend having signed for six lots at 1,036,000gns. Among the haul was Listed winner Morando, who went the way of Alastair Donald for 290,000gns.

The four-year-old Kendargent gelding has won four races for Roger Varian and achieved a peak RPR of 116. He was last seen finishing a good second in the Group 3 Prix Andre Baboin.

"He's a ready-made Group-race performer who is lightly raced for a four-year-old," said Donald. "He could be one for an international campaign."

George Washington, the phenomenon and his fragile legacy

'He seems to be putting an intangible quality in his foals'