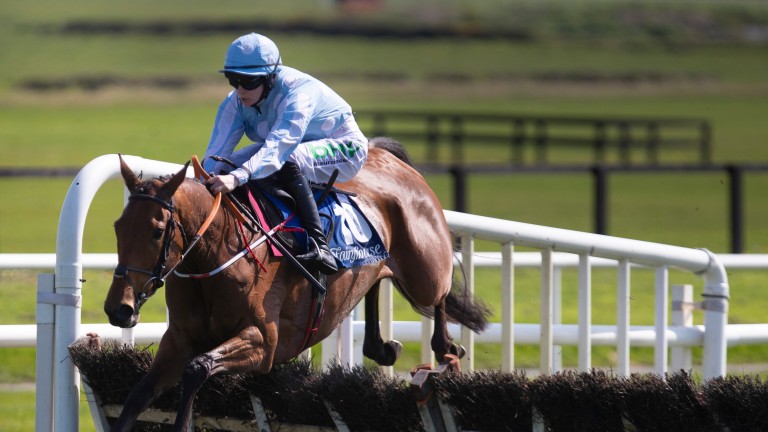 Honeysuckle: going from strength to strength over hurdles
Patrick McCann
1 of 1
By Tom Peacock 6:06PM, APR 21 2019

Honeysuckle provided Doug and Lucy Procter’s The Glanvilles Stud with its second Grade 1 win in as many seasons after her resounding victory in the Irish Stallion Farms EBF Mares Novice Hurdle Championship Final at Fairyhouse.

The Dorset operation bred the 2017 Long Walk Hurdle scorer Sam Spinner, who returned to the form of old with a recent second behind Paisley Park in the Stayers’ Hurdle at Cheltenham.

Honeysuckle, who was bred by Procter’s associate Dr Geoffrey Guy and now with Henry de Bromhead, is by the deceased Yorton Farm stallion Sulamani while her dam, the Lando mare First Royal, is also no longer with us.

The half-sister to point-to-point scorers Dunraven Royal and Colorado Doc is now unbeaten in four hurdling starts as she provided Rachael Blackmore with her first Irish Grade 1, seeing off Elfile by five and a half lengths as the 6-4 favourite. It was also a high point of what has been a quiet National Hunt season for British breeders.

Although Procter sold her for €9,500 as a three-year-old store at the second part of the Tattersalls Ireland Derby sale and she joined present owner Kenneth Alexander for a mark-up €110,000 through Goffs UK at Punchestown last year after landing her maiden point-to-point at Dromahane, there were no hard feelings on his behalf.

"I’m absolutely over the moon – but absolutely shell-shocked," he said.

"That race was over two and a half miles, but she is better over farther – only her class got her through.

"I liked Honeysuckle so much from the get-go that I sent the mare back to Sulamani and we now have a year-younger full brother called Last Royal. He has been backed and broken, but he’s in a field at the minute as he’s a big, backward horse.

"The other foal we got out the mare is a Shirocco filly called Rock Royal in France. She is quite little, which is unusual. I sold her to race in Jersey, but I’ve just managed to buy her back to be covered. I’m so delighted with Honeysuckle, and hopefully this is the start of even bigger things."

FIRST PUBLISHED 6:06PM, APR 21 2019
I liked Honeysuckle so much from the get-go that I sent the mare back to Sulamani and we now have a year-younger full brother called Last Royal