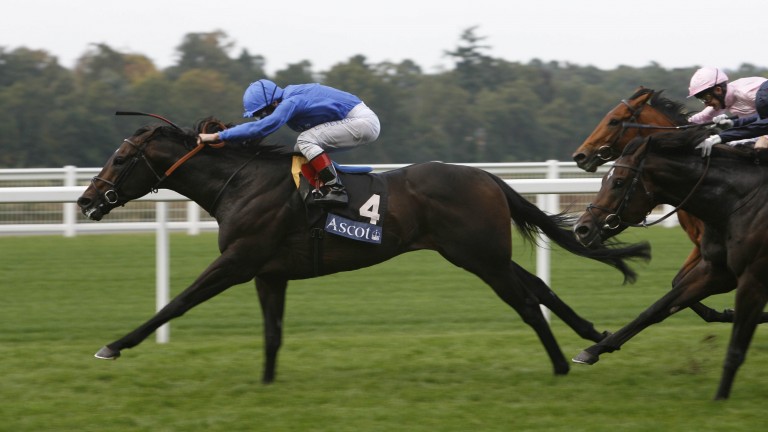 A prophet is not without honour, according to scripture, but in his own country. It must be said that things have not quite worked out that way for Ramonti. Exiled from Ireland after a single season at Kildangan, when apparently struggling with fertility, he returned to his roots in order to rebuild his reputation. Now, having produced a spectacular Classic winner in his homeland last weekend, he appears to have got himself out of a corner - which is no less than he tended to do for others on the track.

His arrival at Godolphin, after all, coincided with the stable’s lowest ebb, but he papered over the cracks in heroic fashion - accounting, single-handed, for no fewer than four of the stable’s six Group 1 wins in 2007. In fact, in six starts that year - all at the highest level - he was beaten only by Darjina in the Moulin and by Red Evie in the Lockinge, meanwhile sweeping the Queen Anne, Sussex and Queen Elizabeth II Stakes before stretching out to ten furlongs in the Hong Kong Cup.

It was at the same meeting the previous year that he had drawn the attention of Sheikh Mohammed, a bold-running third in the Hong Kong Mile on only his second start outside Italy. He had previously proved himself outstanding among his home herd, to the extent that he was only caught on the line in the Italian Derby when clearly beyond the limit of his stamina.

Unfortunately, the decision to keep him in training backfired as Ramonti was confined to a single, below-par start in 2008. By the time he arrived at Kildangan, he was seven - and old news. He also had some decidedly exotic antecedents.

Ramonti was one of just 19 foals in the first crop of Martino Alonso, whose own endeavours for the Botti family - featuring a couple of Listed wins - suggested him to be hardier in physical than mental terms. And despite a high strike-rate from modest books, the only time the son of Marju really made headlines was when kidnapped in 2009. (He resurfaced after six months, 400 miles away but safe, only to die a couple of years later after a paddock accident.)

Martino Alonso was from the same family as Teenoso and Sir Percy, tracing to the Mollers’ foundation mare Horama. Although she won four times over five furlongs, with the years it became ever more associated with Classic staying power - extending to a St Leger winner and runner-up, in Rule Of Law and Celestial Storm respectively. Nowadays, of course, that kind of thing sends commercial breeders screaming to the hills; and nor would Ramonti’s unplaced dam Fosca, by El Gran Senor out of an Alleged mare, have lured too many of them back.

In fairness, Fosca's family had produced regular glimpses of quality going back to her fifth dam, Meld, winner of the 1955 fillies’ Triple Crown (and subsequently dam of Derby winner Charlottown and the unraced champion sire of New Zealand, Mellay). And the fact was that Ramonti had class, consistency, pluck, speed and a terrific physique. According to Weatherbys figures, enough breeders were prepared to overcome any reservations about his origins - not to mention his failure to race at two - for Ramonti to entertain 111 mares in his debut season at Kildangan.

The fact that only 26 foals were subsequently recorded, however, suggests that he had other, more alarming issues holding him back at the time.

He was duly transferred to Allevamento di Besnate for a fresh start. In the meantime, that thin first crop turned out to include a smart one in Montiridge, Group-placed for the Hannons at two and beaten only a head in the Jersey before winning Listed and Group 3 races at three. Another son went on to make the frame in the 2013 Derby Italiano, which can only have helped Ramonti’s relaunch under the skilled management of veterinarian Paolo Crespi and his team.

One of the mares sent to Ramonti, that same spring of 2013, was a Listed-placed daughter of another Italian exile in Celtic Swing. Miss Sultin’s only other foal to have raced, Mickai, last year won the 189th running of the historic Corsa dell’Arno, the most valuable handicap in Italy. But she produced something of a wholly different order for Massimiliano Porcelli in Mac Mahon, her son by Ramonti.

Winner of his sole start at two, Mac Mahon was so impressive in his two Classic trials that he was bought last week by Takaya Shimakawa, an organic foods entrepreneur and a major player in Japan. That proved an inspired investment at Capannelle on Sunday, as Mac Mahon stormed five lengths clear.

It was a display of unmistakably familiar gusto. Certainly it must have reminded Alduino Botti, his trainer, of his new champion’s sire during his days in the yard. If as much by ill luck and judgement, it may yet prove that something rather special has slipped through the hands of breeders in these islands.