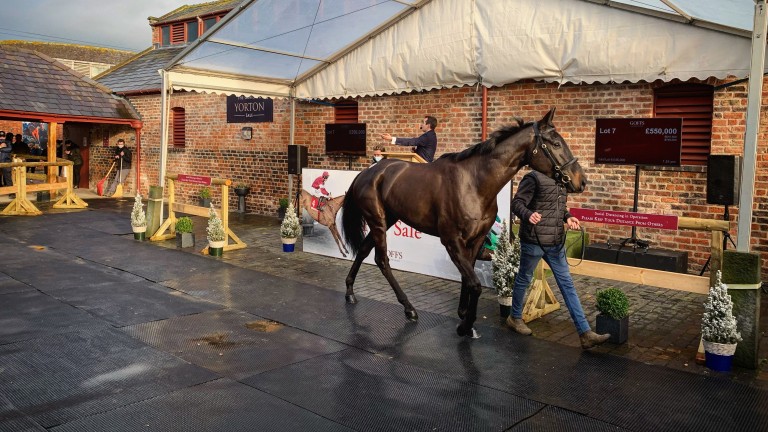 A tense bidding battle caused an almighty stir in the sleepy Welsh countryside on Thursday as Classic Getaway, the highly touted winner of a Borris House maiden, equalled the record price for a point-to-pointer at public auction when knocked down to Tom Malone for £570,000 at the Goffs UK December P2P Sale at Yorton Farm.

The record had been set at the same venue just five weeks earlier when Jonbon, a brother to Douvan, fetched the same price to the bid of JP McManus. Businessman Anthony Barney filled the role of underbidder on that occasion, and there was a distinct sense of deja vu as it was his representative, Robin Woodward, who came off second best for Classic Getaway.

Donnchadh Doyle's strapping four-year-old son of Getaway drew an opening bid of £100,000 before the likes of Malone, Woodward and Goffs UK's Jeremy Mactaggart, taking instructions on the phone, soon pushed the price to £370,000.

Bids of £10,000 had been traded up to that point, when Woodward, standing by the entrance to the sales arena, laid down the gauntlet with a £30,000 increase that saw the bid board reach £400,000. Auctioneer George Stanners turned to Malone and said: "Don't be bullied!" and the agent duly nodded with another £10,000 response.

It seemed as though Woodward's tank might be running empty after the strong-arm tactics didn't work, but he persevered right up to the £560,000 mark. However, when Malone delivered the record-equalling bid, a frustrated Woodward turned his back on proceedings and the gavel came down. 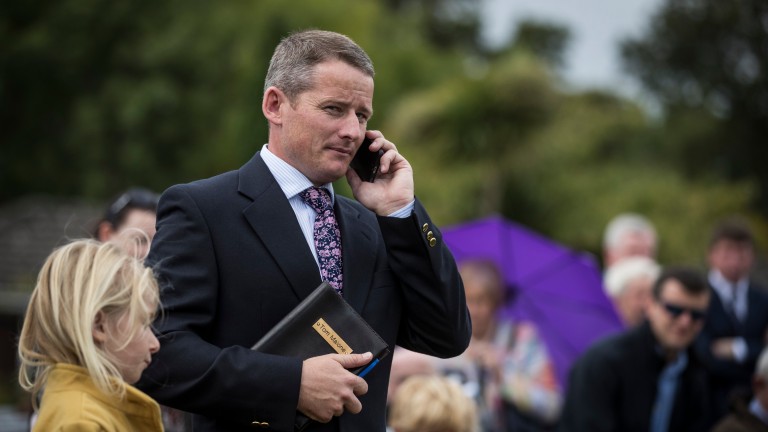 "He's been bought for an existing client in Gordon Elliott's yard," said Malone of the eight-length debut winner. "He's absolutely gorgeous and you don't often come across horses like him. I know it sounds silly, but when he ran at Borris he sprinted clear then genuflected at the back of the last fence, spooked himself and then sprinted again because he'd frightened himself.

"You can only do what he did at the back of the last fence if you have so much in hand. He was well touted before he ran, they knew what he was going to do, and Donnchadh Doyle would have 60 or 70 of this type and he stood out. You couldn't paint him, he's that beautiful. The future's very bright for him."

Classic Getaway becomes the latest big-money point-to-point recruit to be added to Elliott's Cullentra House Stables, where he will join the likes of the £430,000 Grangeclare West and the £310,000 Guily Billy, the top two lots from the Tattersalls Cheltenham December Sale who were bought by Cheveley Park Stud, as well as the €470,000 Ginto, who topped the Cheltenham November Sale when sold to Noel and Valerie Moran's Bective Stud.

On the record-equalling price, Malone added: "You never think you're going to have to give it but you have to if you want them. Would you rather underbid and see someone else winning with it or push the boat out? We could all look foolish in a year's time, but if you don't buy them you can't look foolish or be happy whatever way they turn out."

Bred by Daniel Fogarty, Classic Getaway is out of Classic Magic, a daughter of Classic Cliche who was placed in a bumper and a point-to-point. Classic Magic, who is from the family of 1984 Long Walk Hurdle scorer Kristenson, has produced one other winner in the Nigel Hawke-trained Alminar.

The son of Getaway was making his third appearance at public auction, having been pinhooked by Brendan Bashford at £24,000 when consigned by Trickledown Stud as a yearling before Ballincurrig House Stud presented him at the Goffs UK Spring Store Sale, where he joined the Monbeg Stables fold at £65,000. 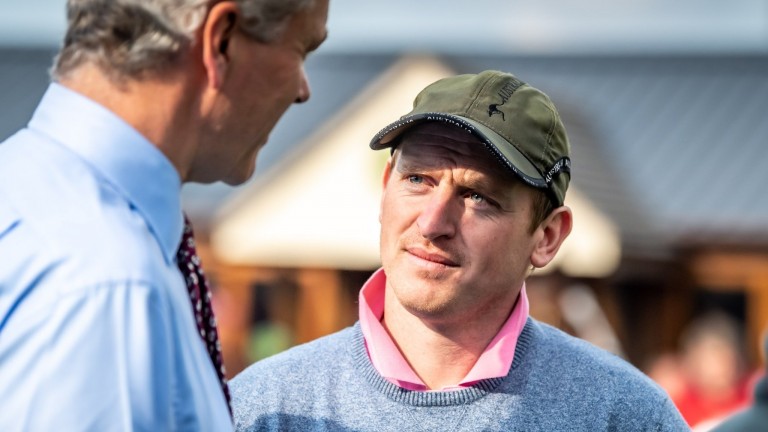 Donnchadh Doyle: "You wouldn't come across horses like him everyday as a store, not at that price"
Sarah Farnsworth/Goffs UK

"He's a very special horse and I was lucky to buy him," said Doyle. "You wouldn't come across horses like him everyday as a store, not at that price, but it's worked out great. Coming up here I thought he'd make somewhere between three and four [hundred thousand] and that would've been a great price. But that was just a different level. It's amazing."

Despite having now underbid both record-setting point-to-point recruits, Woodward said that we would be hearing plenty more from Anthony Barney, with the owner "working on giving something back to the racing public."

Woodward said: "Tony is a great man, loves his racing and it takes a helluva guy to stand up there and bid the money that he's doing. He's seen how the best horses are monopolised by the leading owners and we've got a bit of a project going on. I can't say too much right now, but if you watch this space you'll see what's happening.

"The guys like JP McManus and Tom Malone and Gordon Elliott, anyone who's willing to put that money on the line, you wish them all the luck in the world as they're propping up the industry. It was close but no cigar for us today."

Another Queen for Cobajay Stables

Classic Getaway may have been the headline act but four other lots fetched a six-figure sum during the sale, headed by the £330,000 Queens River who was knocked down to Goffs UK's managing director Tim Kent, bidding on behalf of Kieran McManus.

The four-year-old daughter of Kayf Tara was consigned by Aidan Fitzgerald's Cobajay Stables, who landed an almighty touch of their own having paid just €20,000 for the filly at the Tattersalls Ireland Derby Sale.

Queens River had done plenty to enhance her value as she had made an impressive winning debut at Boulta under Derek O'Connor on Sunday.

"She did it herself because she's such a good mare," said Fitzgerald when asked how he had transformed a €20,000 store into a six-figure pointer. "The minute we bought her we loved her and Queens Brook was running at the time so I said I'd call this mare Queens River after her. 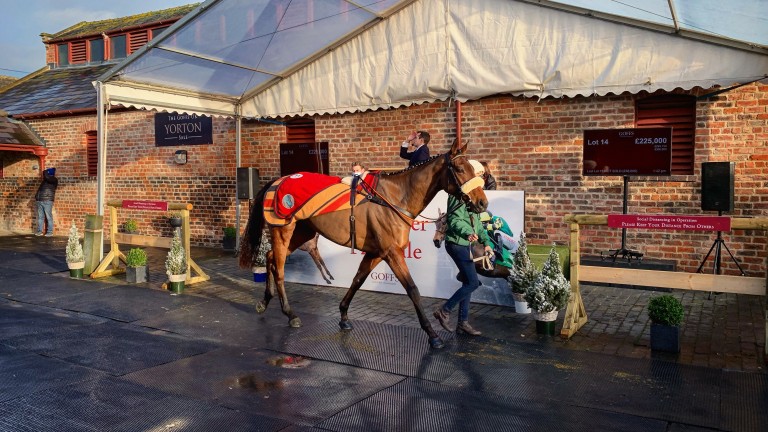 "She won fierce well the other day, she did it so easily. Derek got off her and said it's hard to know how good she is because she never even broke sweat. We knew she'd win but we didn't think we'd get anything like that price for her. It's brilliant."

Queens River is out of the Supreme Leader mare Follow My Leader, making her a sister to the classy performer The Long Mile, who is owned by JP McManus, and the two-time winner Larkbarrow Lad. Further back it is the family of Samcro.

Queens River was making her third sales ring appearance having also changed hands for £14,000 when bought by Johnny Collins' Brown Island Stables at the Goffs UK January Sale in 2018.

Her price pulled up just shy of the record for a National Hunt filly or mare, with that honour belonging to the £400,000 My Whirlwind who was bought by JP McManus at last year's Festival Sale.

Derek O'Connor's influence on proceedings was not confined to just having ridden Queens River, as the leading amatuer jockey turned bloodstock agent later in the session when going to £210,000 for Here Comes The Man, winner of a Boulta maiden for Colin Bowe on Sunday.

"He goes into training with Rose Dobbin," said O'Connor, who signed the docket in the name of Gerry Hogan Bloodstock.

"He was very impressive in his maiden and handled tough conditions really well. He showed great speed and stamina as well so I think he's a nice horse and I've no doubt he'll be very successful for Rose."

The five-year-old son of Flemensfirth won by ten lengths on debut and looks to have inherited plenty of the ability that runs through his pedigree.

He is a brother to Evan Williams' Listed-winning hurdler Mack The Man, with the pair out of an unraced Saddlers' Hall sister to the Grade 1-winning bumper performer Mick The Man. Williams and Highflyer Bloodstock's Anthony Bromley were among the underbidders.

Even with dense fog shrouding most of the course, it was clear to see that Mags Mullins' Tattersalls maiden winner My Mate Mozzie is a performer of considerable promise. The four-year-old son of Born To Sea will now head back to Ireland having brought a final bid of £205,000 from Champion Hurdle-winning trainer Gavin Cromwell.

"I'm delighted with the price and I'm very happy he's gone to Gavin, he's a great trainer," said Mullins. "He's been such a lovely horse since the day we got him. I was hoping he'd make that sort of money because I like him alot, he's a very sharp horse."

On her first experience at a sale at Yorton Farm, Mullins added: "It's tricky times, nothing is simple at the moment, but they're doing a great job here. Hopefully we can all keep going and get through the other side."

Despite winning a Tattersalls four-year-old maiden by eight lengths, My Mate Mozzie has a pedigree more in keeping with the Flat. He is out of Leo's Spirit, an unraced daughter of Fantastic Light and the famed producer Spirit Of Tara, meaning the dam is a sibling to the likes of Echo Of Light, Akarem and Flame Of Gibraltar.

My Mate Mozzie has now appeared at public auction on four occasions. He was unsold at €8,000 as a foal and was bought back by his vendor at €10,000 the following year. He was bought by Mullins for €7,500 at last year's Tattersalls Ireland August Store Sale.

The session also saw Valentine Bloodstock, the operation run by Lizzie Kelly and her husband Ed Partridge, make a successful sales ring debut when their Warwick winner Hamilton Dici was sold to Aiden Murphy and Kim Bailey in a private sale for £75,000.

The three-year-old showed a tidy profit on the €18,000 the couple gave to acquire the scopey son of Coastal Path at the Arqana Autumn Sale in 2018.

Partridge said: "Initially we were disappointed he didn't make his reserve in the ring but Kim Bailey approached us afterwards and said he'd like to train the horse so we were able to agree on a price.

"We're thrilled that Kim wanted him as he's having a great season and hopefully this horse adds to his tally of winners."

Classic Getaway's record-equalling price contributed to turnover of £2,349,000, an average of £90,346 and a median of £52,500. The boutique auction saw 26 of 31 offered lots change hands for a clearance rate of 84 per cent. The December P2P Sale is a new addition to the calendar so there are no comparative stats.

At the close of trade, Goffs UK managing director Tim Kent said: "What a day! It’s fair to say that the results of today’s sale have far exceeded expectations and we would like to thank everyone who has participated in the success of this sale.

"We were delighted with the strength of the catalogue, but to equal the world record price while smashing the average and median achieved here last month is beyond anything that we could have imagined. This has been an incredible year that we will remember for so many different reasons.

"Once again, we would like to thank James and Jean Potter, David Futter and his team for hosting us here at Yorton Farm and Stud. There is no doubt that vendors and purchasers have thoroughly enjoyed the atmosphere and facilities offered at this unique location and we are delighted to finish the Goffs UK year on a high.

"We would also like to thank all of our vendors for their incredible support and we look forward to welcoming everyone back to Doncaster at the end of January, which is where it all began earlier this year with a top price of £370,000."

FIRST PUBLISHED 4:42PM, DEC 17 2020
Would you rather underbid and see someone else winning with it or push the boat out?