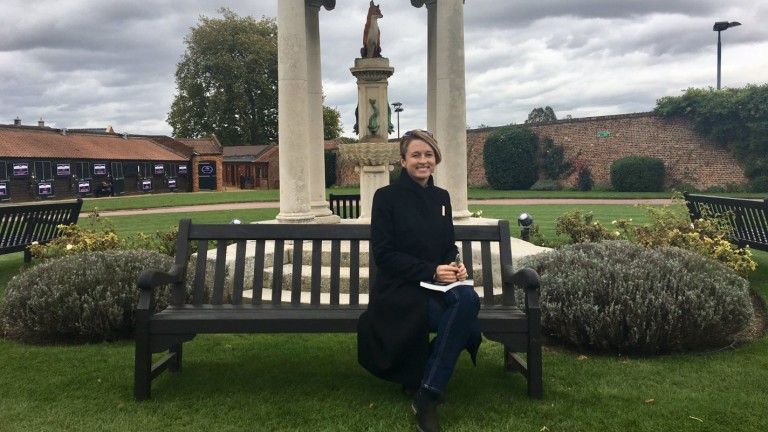 While a significant number of withdrawn horses may have shortened the overall time frame of the closing session of the Ocala Breeders' Sales March Two-Year-Olds in Training Sale, there was no shortage of buyers willing to wade in to secure the best of the first juveniles the sales season had to offer.

OBS director of sales Tod Wojciechowski said: "It was another good, solid day of selling horses. We were very pleased with how the sale wrapped up.

"It seemed to hold its strength all the way to the end. Actually our caterer told us that yesterday he hadn't served that many meals in close to seven years. The sheer population of people that were here was great to see."

Topping the sale was hip 311, a bay filly by Ashford Stud's Practical Joke out of Peruvian champion Valiant Emilia. Consigned by Top Line Sales, the filly was purchased by Japanese trainer Hideyuki Mori for $750,000.

"We're super surprised [by the price]," said Torie Gladwell of Top Line Sales. "She was extremely popular at the barn. All the stars were aligning, but I had no idea she was going to sell for this much money. I am still shaking. My nerves are a bit of a train wreck right now. We thought she would bring between $400,000 to $500,000. We're just so happy."

"I like the horses I have seen by the sire and I liked her action on the racetrack," said Mori via his interpreter. "This is the type of horse that my owners like."

At the 2020 Keeneland September Yearling Sale, hip 311 was purchased by Down the Stretch for $120,000 from the Taylor Made Sales Agency consignment. The filly was one of 25 juveniles to breeze the co-fastest eighth-mile in :9 4/5 during the OBS under tack show before being sent through the sales ring.

"Nothing fazes this filly," said Gladwell. "She is so level-headed and calm. She gives it everything she has all the time, and we have been high on Practical Joke all winter.

"Japanese buyers have done very well with a lot of our graduates in the past. They buy one or two from us every year. We're so happy for everyone."

Later on in the afternoon, Mori went to $550,000 for hip 507, a colt by Ashford Stud's American Pharoah named American Passport.

Consigned by Coastal Equine, the colt was bred in Kentucky by Cove Springs out of French Passport and counts among his family Grade 2 winners Smooth Air and Overdriven as well as Fourstardave Handicap victress Got Stormy.

Jesse Hoppel of Coastal Equine said: "We're happy with that sale. It's for local breeders in Kentucky and I think they'll be ecstatic."

Consigned last year to the Fasig-Tipton Kentucky Selected Yearlings Showcase, hip 507 was previously a $225,000 RNA when offered by Vinery Sales. He worked an eighth-mile in :10 1/5 during the OBS under tack show.

In total, Mori purchased eight horses during the two-day auction for receipts of $2,245,000.

Wojciechowski was heartened by the return of international buyers who had been absent on the grounds due to travel restrictions surrounding the Covid-19 pandemic. While many still chose to buy online, the decision for Mori and others to attend the sale in person was a welcome change on behalf of both the sales company and the consignors.

"Mr. Mori was here and we had a number of Japanese buyers online, but certainly the domestic spending was good as well," said Wojciechowski.

"We certainly hope the momentum of this sale carries through for the rest of this season. Certainly April continues to be the two-year-old sale of the world. I know we will have plenty of good horses in April and if this sale was an indication, it bodes well for April."

"I didn't know what to expect coming in," said Hoppel, who sold six juveniles during the auction for receipts of $904,000. "I have a lot of good horses for April, ones that are equally as good as our horses in this sale.

"I think we were testing the waters to see where we are at and now we know we are in a good marketplace. I think everyone is going to leave here feeling really good about where we are at."

FIRST PUBLISHED 10:10AM, MAR 18 2021
Japanese buyers have done very well with a lot of our graduates in the past. They buy one or two from us every year