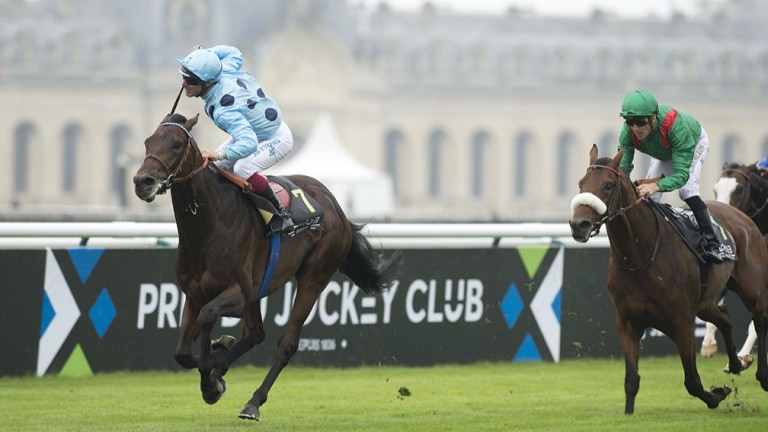 The final share in champion second-season sire and Haras D'Etreham resident Wootton Bassett has been snapped up by Hesmonds Stud, who parted with €120,000 through the online auction held on arqanaonline.com.

This isn't the first time Arqana has offered shares in a stallion online, with a quartet of shares in Haras de Bonneval resident Siyouni also being offered through the same method.

Formerly owned by the Goulandris family, Hesmonds Stud was purchased by Kazakh owner-breeder Nurlan Bizakov in 2010 and is currently home to 25 broodmares.

The farm had already bought the first share in the Aga Khan's Siyouni to be offered on arqanaonline.com for €355,000.

Hesmonds Stud manager Tony Fry commented: "We are very pleased to have bought into this exciting stallion. Even before we found out about the online sale we had a mare down to him, a maiden by Sea The Stars out of a Storm Cat mare. Now we'll just have to look for a second one! We purchased a share in Siyouni via Arqana online, which we thought offered tremendous value.

"This is also a very fair price considering that Wootton Bassett will stand for at least €20,000 next year and the share includes two nominations. We are always looking to be involved with this sort of horse. I would like to thank Nicolas de Chambure at Etreham and Arqana for this opportunity."

Wootton Bassett stood his first season at Haras d'Etreham in 2012 at a fee of €6,000 and had only by 17 foals on the ground. But they included two Group horses, most notably Almanzor, who has carried all before him this season when landing a hat-trick of Group 1 successes in the Prix du Jockey Club, Irish Champion Stakes and most recently the Champion Stakes at Ascot.

FIRST PUBLISHED 4:51PM, OCT 26 2016
We are very pleased to have bought into this exciting stallion