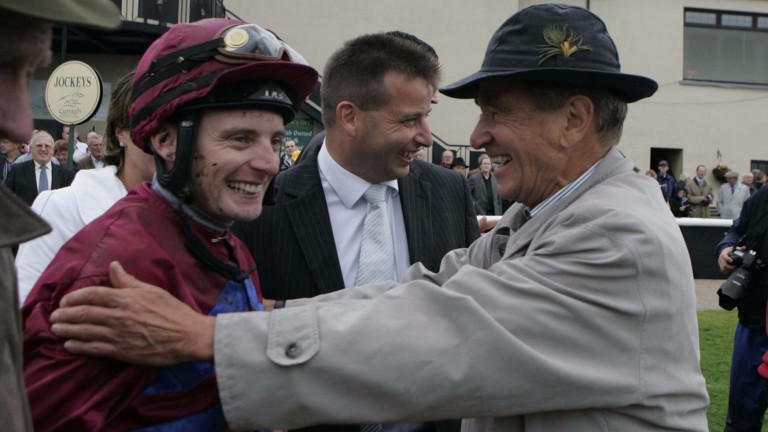 A memorial service will be held at the Hotel Minella in Clonmel on Monday afternoon to celebrate the life of noted breeder Joerg Vasicek, who died unexpectedly in October.

Vasicek, who was 74 and owned Kenilworth House Stud with his wife Diana, passed away while on holiday in October.

The Swiss businessman purchased the farm outside Clonmel in County Tipperary in 1991 to further his love of racing, particularly the National Hunt variety, and under his guidance Kenilworth House Stud became a renowned producer of top-class jumpers.

Gerry Ross has been manager of the stud for almost 19 years and he paid a heartfelt tribute to his late employer.

“He was an absolute gentleman,” Ross said. “He became a friend more than an employer and all the staff here would feel the same way about him. He was a very popular man around the area too -very well liked by all the local people, a great character.”

He enjoyed all aspects of the National Hunt scene and loved hunting with the Tipperarys, going to point-to-point meetings to watch his young horses compete and the thrill of seeing horses he bred reach the pinnacle of the sport.

“He liked nothing as much as walking through the fields at Kenilworth looking over the horses, checking on them,” Ross recalled.

The multiple Grade 1 winner Carlingford Lough is just the latest in a long line of star jumpers to represent the Vasiceks’ celebrated breeding at the highest level of National Hunt racing.

Winner of the Galway Plate in 2014 for John Kiely and JP McManus, the son of King’s Theatre has thrived over fences, providing AP McCoy with his only success in the Hennessy Gold Cup, a day after announcing his retirement from racing.

Carlingford Lough retained the Hennessy crown at Leopardstown last February and added the 2016 Punchestown Gold Cup to a CV that now boasts six triumphs at the highest level.

Carlingford Lough is a half-brother to the first Cheltenham festival winner bred by the Vasiceks, Thisthatandtother, who was successful in a thrilling renewal of the 2005 Ryanair Chase (then the Grade 2 Daily Telegraph Chase) for Ruby Walsh and Paul Nicholls. Also a Grade 1 winner over hurdles, he is one of three black-type winners bred by the Vasiceks out of Baden, a daughter of Furry Glen, the other being Charlie Hall Chase winner The Tother One.

From a small broodmare band Joerg Vasicek enjoyed fantastic success and bred two Cheltenham Festival winners - What A Charm, winner of the Fred Winter Juvenile Novice Hurdle in 2011, being the other.

Ross recalled some of the winning horses Joerg Vasicek owned.

“When Top Trip won the Prix Hocquart at Longchamp for him, that was a good day too, and there was Bilboa, who won the Glenlivet Hurdle at Aintree, and Millenium Royal, a Grade 1 horse in France,” he said.

Vasicek’s maroon silks were also carried to big-race glory on the Flat with Group 1-winning fillies Termagent and La Collina, both trained by Kevin Prendergast, providing him with memorable days at the Curragh and Leopardstown.

La Collina’s colt foal by Shamardal sold for 375,000gns at Tattersalls last month, a result Vasicek would have derived great satisfaction from.

“He'd have been pleased as punch watching La Collina’s foal sell and also the National Hunt foals at Tattersalls Ireland last month," Ross said. "He would have been standing by the ring with his chest puffed, proud of the horses.

"He loved nothing better than going to the sales, meeting people and enjoying the banter with them. He loved every aspect of it."

The memorial service at 2.30pm this afternoon will be a celebration of the life of a man who enjoyed life to the full and was loved as a great character.

Joerg Vasicek is survived by his wife Diana, daughters Caroline and Anita and his wider family and many friends.