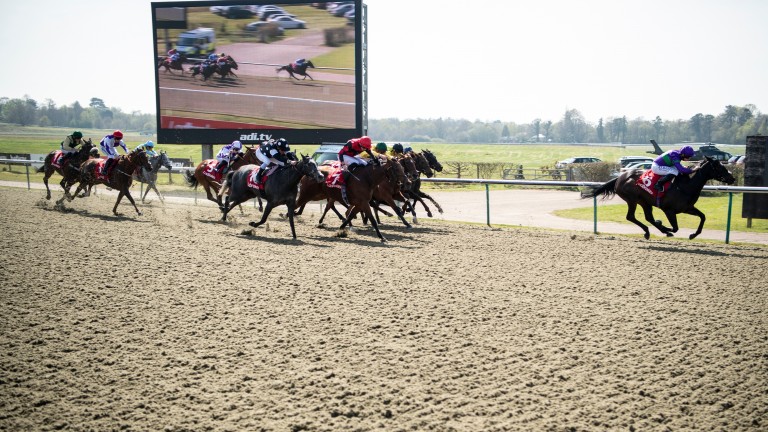 Heavenly Holly holds off her rivals at Lingfield on Good Friday
Edward Whitaker
1 of 1
By Tom Peacock 6:46PM, APR 21 2019

The exploits of Dan’s Dream cast the charitable commitments of Steven Smith in the warmest of spring lights when she won the Fred Darling and went on to compete in the 1,000 Guineas last year.

With a new Flat season coming into leaf, the owner-breeder is commanding attention once again with last Friday’s All-Weather Fillies And Mares’ Championships winner Heavenly Holly one of a number of potential advertisements for Hunscote Stud, the Warwickshire nursery he only started in 2012.

As well as being Hunscote’s first Group winner, Dan’s Dream was named after Daniel Nicholls, who was paralysed as a teenager, and shares in the filly were auctioned to the likes of Sir Ian Botham and Sir Gareth Edwards, as well as any prize-money being donated to the Nicholls Spinal Injury Foundation.

It is quite possible that Heavenly Holly will be joining her on the Pattern board soon too, with trainer Hugo Palmer suggesting a return to Lingfield for the Chartwell Stakes as an option after her front-running success under Ryan Moore, although Smith is advocating a cautious approach.

"We’d always had the race in mind because she’d qualified for it and we wanted to get the season going," he said. "I think Ryan rode a brilliant race, absolutely sensational, I’d put it as much down to him as the horse, but she’s only had five runs so we’re very happy with her.

"I don’t know if she needs to go straight to Group company, for us it’s more important to get the black type than it is to get Group black type. The race she won was Listed race quality and beyond, so hopefully she can win a Listed and we’ll see where we go from there."

Smith’s interest in the spinal charity stems from his own traumatic experience. In 2011 he fled an armed attack at his French holiday home, falling down a ravine, and he was initially paralysed by back injuries.

During a slow recovery to being able to walk again - defying medical prognosis and later even completing the London Marathon - he bought his stud. Heavenly Holly’s dam Happy Holly, a winner in France for Yann Barberot as well as a half-sister to Prix de l’Opera winner Lily Of The Valley and the top American and Dubai dirt performer Mubtaahij, became a foundation mare.

"Rebecca Rolfe was broodmare number one, and she was number two," he explained.

"We loved her pedigree, and that was before Mubtaahij got famous as well. I’d always loved [the dam] Pennegale, Pennekamp [damsire] thing, and I think Holy Roman Emperor is underrated as a broodmare sire. I’m sure he’ll become more famous as time goes on.

"She ticked all the boxes and the trainer liked her but it was too many niggly issues, that’s why they were selling, and we bought her for a decent price, 90,000gns."

Heavenly Holly, who only made her track debut as a three-year-old last October, was such a slow learner that Smith had feared she might even be retired without racing. The acquisition of a filly by Darley’s restricted Shamardal would have been enough to make a breeding proposition alone but she has now earned the right herself.

"We’ve done Galileo over Danehill nearly every time and I still don’t quite know how we got the Shamardal cover because you’d never get in there in the last three years, I wouldn’t have thought," Smith said. "I think Darley Dawn (Laidlaw, nominations manager) had a good day that day and liked us! We had a couple in foal to Exceed And Excel, so I suppose we were putting quite a bit into Darley at the time." 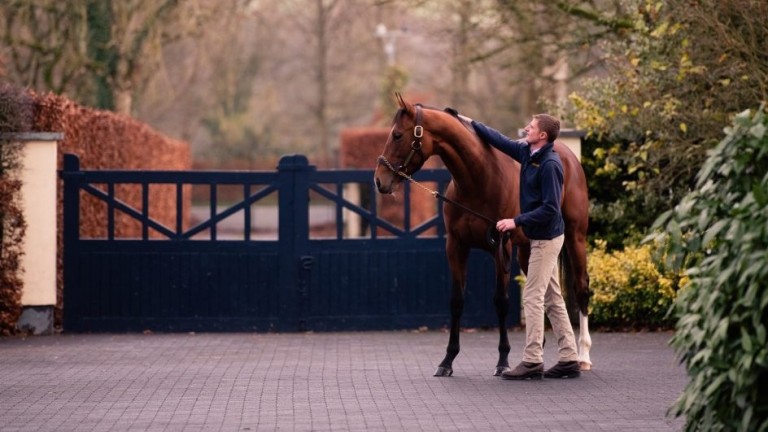 Nonetheless, Smith has looked back to Coolmore for subsequent plans with Happy Holly.

"She’s got a good one with Ralph Beckett, James Park Woods, he’s by Australia and will be running as a three-year-old. She’s then got a Gleneagles with Roger Charlton, a two-year-old, Island Holly. Sadly the one I think was the best died of colic earlier this year, she was the Gleneagles yearling, and we’ve got an Australia filly foal, born about two weeks ago, and she looks amazing.

"She’s going to Saxon Warrior any day now. We weren’t sure how good Heavenly was when we did our breeding plans this year, I think with the benefit of hindsight we would have gone to Lope De Vega. I think next year him for sure unless he goes to a crazy price, but I’m happy to try Saxon Warrior, I was very impressed with him last year."

Strikingly, Smith also suggests he has others which could be "potentially better" than even Dan’s Dream and Heavenly Holly. He is transparently enthusiastic about the soon-to-be-seen three-year-old Sea The Stars filly Salve Etoiles, out of his Dalakhani mare Salve Diana and closely related to German champion Sea The Moon. She is with Henry Candy along with Miss Morris, a Cityscape juvenile from a Time Charter line he bought into. Accountancy and finance is how Smith levied the funding of Hunscote, and he is transferring a head for figures to the inexact science of breeding horses.

"We’ve got nearly 20 broodmares now," he explained. "That’s probably a bit too many but what we’re trying to do is get to the quality end of the spectrum. In order to do that I need a little bit more data, I’ve only got six and a half years of that, and I probably need another year to really work out which are the ones.

"I think Happy Holly and family - tick, Royal Ffanci (Dan’s Dream’s dam) and family - tick, there are the two families we want to keep for sure, and I’d like another two. The German family we’d love to keep but we need a decent racehorse out of and we haven’t yet. Then I’m open-minded about the rest. We’ve probably got 12 bloodlines at the moment, and I want to bring it down to about four."

It is a glimpse into the extent of thinking that will be required to replicate the success other studs have excavated through generations.

"We’ve got 60 horses at the moment. I want to be down to about 40 by Christmas and then keep it to around 35-40 going forward, I think that’s the right number.

"We like the racing side, we’re doing this to have fun more than anything, so I don’t want to sell all of them. We’re going to race a colt this year, Mick Channon trains him, a colt called Milltown Star by Roderic O’ Connor. We’ve raced the odd colt to sell but this is the first we’ve kept. I think he could be interesting." 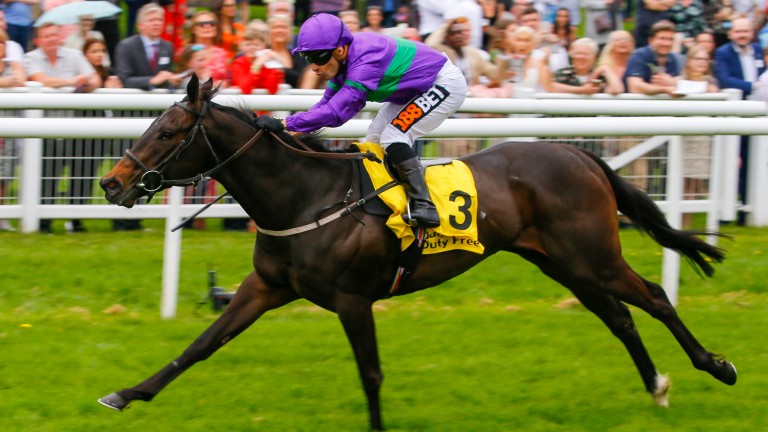 Dan's Dream: Newbury winner will be back for more in 2019
Mark Cranham (racingpost.com/photos)

Hunscote’s flagbearer Dan’s Dream was unable to win again in six subsequent starts after her Fred Darling success but Smith feels that she could soon be striking this from the record after deciding to keep her in training at four.

"We’ve made a rule with her we won’t run unless there’s soft in the description of the going," he said.

"I think we ran her too many times on good, good to firm. She’s better than the rest if it’s soft, and heavy would be perfect. At the moment with the sun shining, she ain’t going to be running. She’s entered at the Curragh in a Group 3 at the beginning of May and we’ll see if there’s any rain.

"Mick Channon thinks she’s improved a lot over the winter, so she could be quite exciting. Maybe she could end up in the Prix de la Foret; I know it sounds like dreaming, but One Master, the horse who beat her only half a length at Tipperary, went on to win the Foret last year, so it may not be as crazy as it sounds. If it came up soft or heavy we might sneak a place.

"We’ll breed from her next year, we only really put her in training this year because of [sire] Cityscape. We own half of him and he needs as many good ones as he can get, otherwise I think we probably would have retired her as a Group 3 winner."

Nina Carberry excited to be sending first homebred to the sales

FIRST PUBLISHED 6:46PM, APR 21 2019
what we?re trying to do is get to the quality end of the spectrum. In order to do that I need a little bit more data