Dam of Harzand will be offered in foal to Invincible Spirit 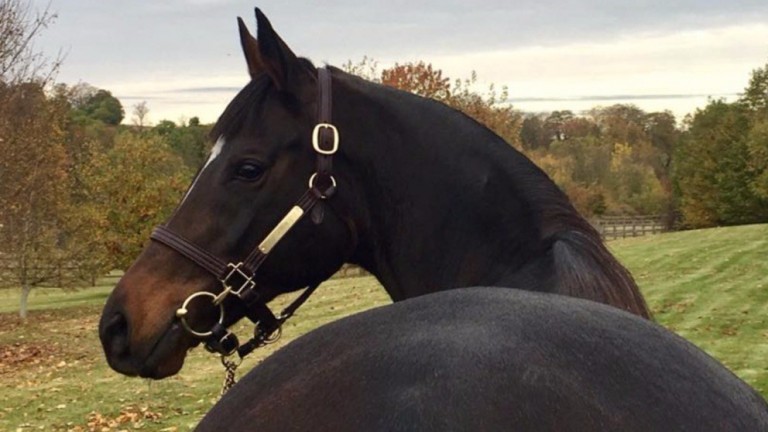 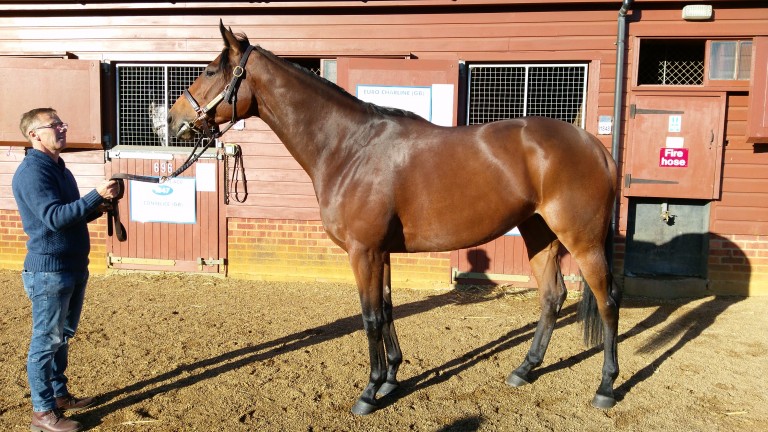 Hazariya: daughter of Xaar is believed to have a filly by Invincible Spirit in-utero
Newsells Park Stud
1 of 2
By Zoe Vicarage 5:29PM, NOV 28 2016

Much of the intrigue in Tuesday's select session of breeding-stock at Tattersalls surrounds Hazariya, the dam of this year’s dual Derby hero Harzand.

The 14-year-old daughter of Xaar will be consigned by Newsells Park Stud, who bought her for €480,000 through Oliver St Lawrence at the Goffs November Breeding Stock Sale in 2014 when Harzand was a yearling.

Since retiring to the paddocks, the Group 3-wining mare has produced five winners including Group 3 heroine Harasiya, Listed scorer Hazarafa and Harzand, who will take up stallion duties at the Aga Khan’s Gilltown Stud at a fee of €15,000 next year.

Hazariya is offered in foal to Irish National Stud stalwart Invincible Spirit and Jullian Dollar, general manager of Newsells Park Stud said: “There aren’t many dams of dual Derby winners who come onto the market and I think she’s a pretty special mare.

“At the time we bought her I remember thinking 'have we spent too much?', but she ticked a lot of boxes as she’s a good-looking mare, proven and I thought she could produce commercial stock. We didn’t dream that the yearling she had would be a future Derby winner.

“We went down the Green Desert line again and Invincible Spirit is a popular sire. She’s meant to be carrying a filly and for anyone who is buying a middle-aged mare to get a filly out of her straight away would be a nice little bit of comfort.”

Harzand’s victory in the Derby at Epsom in June provided the stud with one of its most memorable days and Dollar admitted that it won’t be easy to part company with Hazariya.

He added: “It’s a good commercial decision as we have her Fastnet Rock filly yearling in training with Sir Michael Stoute and a nice Dansili filly foal.

“We just thought with retaining two daughters we could afford to let her go.”

Another mare sure to attract attention is Grade 1 heroine Euro Charline, who is offered on behalf of her owner Team Valor by trainer Marco Botti.

The five-year-old daughter of Myboycharlie returns to the ring where she was sold for the paltry sum of 800gns at the February Sale in 2014.

Euro Charline proved that valuation very wrong indeed by winning four races and amassing more than £1.5 million in prize-money, with her biggest success coming when landing the Grade 1 Beverly D Stakes in 2014. She also notched three second-placed finishes at the highest level including behind Belardo in the Lockinge Stakes in May.

Botti said: “She’s been a fantastic race filly - she’s been unlucky this year having been beaten in the Lockinge and in Dubai. There’s no doubt she’s the best filly I’ve trained.

“I really hope somebody will buy her and breed from her because I think she could make a great broodmare. She has good conformation, physically she’s beautiful, and she always tried her hardest. I think that’s what you want to see in a mare you want to breed from.

“She’s by Myboycharlie so will be an easy filly to do matings with. I’m sure she’ll pass on her qualities to any future progeny she has.”
Other highlights of Tuesday's catalogue include Screen Star, the dam of Cheveley Park Stakes winner Lumiere; Poule d'Essai des Pouliches runner-up Irish Rookie; and South American champion Furia Cruzada, later Group 2-placed for John Gosden.
Selling starts at 9.30am.

FIRST PUBLISHED 5:27PM, NOV 28 2016
There aren't many dams of dual Derby winners who come onto the market and I think she?s a pretty special mare