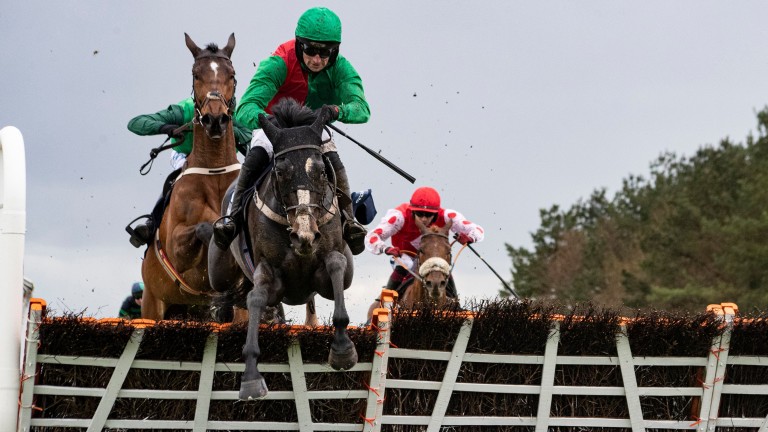 Authorized showed how greatly missed he is as a source of top-class National Hunt runners when his daughter Echoes In Rain maintained her winning momentum in the Grade 1 Champion Novice Hurdle at Punchestown on Tuesday.

The five-year-old - the winner of her last two starts in Grade 2 company, including at Fairyhouse by 15 lengths - was bred by Thierry Storme but failed to sell at €30,000 when offered at the 2017 Arqana Autumn Sale.

The Willie Mullins-trained mare is yet another top-class National Hunt performer for Authorized, who now stands in Turkey having previously stood at Darley's three European bases since his retirement from the racecourse.

Echoes In Rain is the first foal out of the Listed-winning chaser Amarantine, a daughter of King's Best and a sister to three black type performers. The Punchestown winner's Saint Des Saints half-sister Saintamarin was third in the Listed Prix Wild Monarch at Auteuil on Sunday for Storme and David Cottin.

Echoes In Rain is owned by the Kieswetter family's Barnane Stud, an operation that has also enjoyed success at the top level on the Flat with Urban Fox, who won the Pretty Polly Stakes at the Curragh in 2018 having been bought for 425,000gns at the 2017 Tattersalls December Mare Sale.

The second Grade 1 on the Punchestown card went the way of Chacun Pour Soi, who returned from his shock Cheltenham defeat to demolish the William Hill Champion Chase - a fifth top-level win for the son of Policy Maker.

The nine-year-old was bred by Didier Berland and is out of the Grade 3 Prix Bournosienne winner Kruscyna. The dam was sold carrying the star two-mile chaser in utero at the 2012 Arqana February Sale, where Mullins' French talent scout Pierre Boulard signed the ticket at just €12,000.

Perfect start for Almanzor as first runner strikes at Chantilly

FIRST PUBLISHED 6:13PM, APR 27 2021
Echoes In Rain is the first foal out of the Listed-winning chaser Amarantine, a daughter of King's Best