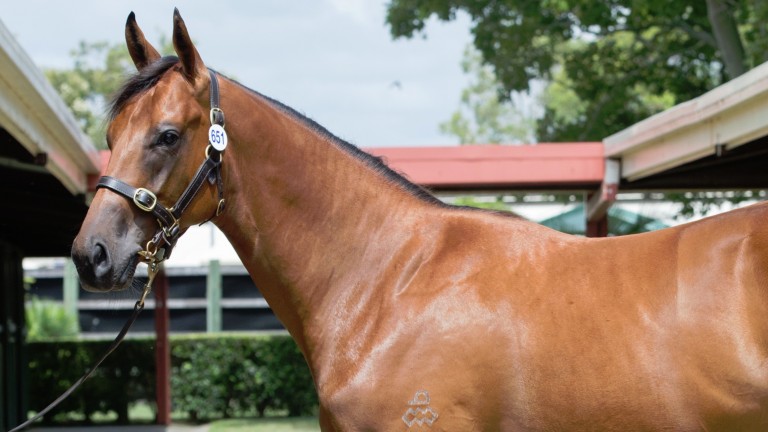 The Redoute's Choice colt out of Ballet Blue who was consigned by Arrowfield Stud
Magic Millions
1 of 1
2:44PM, JAN 13 2017

The third session of the Magic Millions Gold Coast Yearling Sale gave way to another strong day of trade on Friday that stream-rollered last year's entire sale aggregate with the concluding session of Book 1 still to come.

Trade may have taken a little longer to warm up than in the previous session, but proceedings reached a climax when the son of Redoute's Choice and Ballet Blue, offered by Arrowfield Stud, strode purposefully into the ring. Bidding crept steadily up to the A$900,000 mark, at which point the protagonists began to trade increasingly costly blows until James Harron landed the sucker punch of A$1.3 million to claim day three top-lot honours.

"First and foremost in our selection criteria is trying to find the best physicals," said a beaming Harron. "It's nice when you get the physical matching up with the pedigree. Redoute's Choice is such a dominant stallion, you only need to see the marketplace for sons of Snitzel, Not A Single Doubt and the late Beneteau and the statistics attached to those sires. He's just been prolific.

"When you're trying to buy colts that will be future stallions there's no better sire line to target and to get a son of his is very exciting.

"With Redoute's we're looking for the more medium-sized types. He has the most amazing use of himself and a superb attitude and he looks like a horse that can go early."

The athletic-looking colt is the third foal out of Ballet Blue, an unraced half-sister to four black-type winners, including Group 2 winner The Heavyweight.

"Redoute's is the greatest sire-maker of the local horses. He's dominant, so it's a fitting result," said Arrowfield's John Messara. "This sale has grown in stature. We've been here for a long time, 20-odd years we've been supporting it, but it's picked up a lot of momentum now. It's an important distribution outlet for us and we've got real confidence in the leadership here at Magic Millions."

Arrowfield had already been in the driving seat at the head of the leading vendors' list by aggregate, and the seven-figure transaction was a contributing factor in the stud finishing day three well over A$1m clear of its nearest pursuer.

Arrowfield's domination also extended to the stallion tables, with its residents Redoute's Choice leading the sires' list by average for sires with more than three lots sold, on A$371,364 for 11 sold and Snitzel leading the list by aggregate on A$12,275,000 for 35 sold.

Buyers' insatiable appetite for progeny of Snitzel continued into Friday's session and the sire accounted for a string of big prices. The China Horse Club, Newgate Farm and WinStar Farm combined to secure the most expensive lot by the sire, the Luskin Park-consigned colt out of Listed winner Ultimate Fever who brought A$925,000.

"He's a beautiful colt," reported China Horse Club's Michael Wallace. "We spoke to John [Moynihan], Elliott Walden from WinStar and Henry Field from Newgate, and we all agreed this was a colt we didn't want to leave behind. The physical attributes that he has, that's what we're spending so much time looking for. There's a large amount of risk going on here, if we can share that among ourselves it's fantastic.

"It's a global game, and Australia has a very buoyant stallion market, if you get the right Snitzel colt you'll get well paid at the end of it," he said, before reflecting on the price.

"We'd seen colts yesterday bringing around that sort of money so it didn't come as any great surprise," he said. "But if you get it right you get the whole pot."

The colt, the sixth foal out of the daughter of Gold Fever, is a brother to the four-time winner and Listed-placed Le Cordon Bleu. Wallace reported the colt will head into training in Australia with Peter Snowden.

On the powerful triumvirate that joined forces to buy the colt, Wallace said: "We rely on our own determinations as to what we're looking for physically. If you're going to do it you have to be one hundred per cent confident and have conviction, it's not a game for guessing.

"If you're going to bid like this, bid on things you believe will work. Luckily we have a bunch of people with a good amount of international experience that share that conviction, and it makes sense to ease financial risk on everybody. If the horse proves he can run hopefully we can reap the benefits."

Yarraman Park's I Am Invincible, a former champion first-season sire son of Invincible Spirit, has enjoyed a fine sale, and finished day three second only to Snitzel on the leading sires' list by aggregate, with 35 sold for A$11,470,000, and third to Redoute's Choice and Snitzel by average for sires with more than three lots sold at A$327,714.

The priciest of his progeny so far this sale came shortly after lunchtime, with McEvoy Mitchell going to A$900,000 for a half-brother to Group 1 winner Sizzling. The colt, offered by Milburn Creek, is out of the General Nediym mare Admirelle.

"I was actually the underbidder on his brother Sizzling," Mitchell said. "I loved Sizzling and missed him but didn't want to miss this colt. I'm so excited about him, he's a beautiful colt. I've seen him more this week than I've seen my wife! It's been a tough sale on these young horses, it's been extremely hot. He'll go out to Aquis Farm and get his head down and get over the stresses of the sale."

On who will take ownership of the colt Mitchell said: "Nothing has been decided yet, but I'm not going to have much trouble finding owners. Before dinner tonight it'll be done. I wanted to stay under a million. I thought if we could have got him for between six and eight [hundred thousand] he'd have been the buy of the sale, but he was probably always going to be more than that."

Not long after the colt out of Ultimate Fever had been through the ring another protracted duel broke out over a lot by Snitzel, with the Newgate Farm-consigned filly out of the unraced Hussonet mare Your Life Style eventually going the way of trainer Rick Worthington for A$850,000.

"You need an athlete but you've got to have a pedigree," said Worthington. "She's been bought for the same guy that has Honesty Prevails with me, Trevor Gluck. He wanted to make another addition and she fits the bill. I said to Trevor it'd be nice for her to come back for the race here next year. She looks like a runner but she's got the pedigree too."

Worthington, who had been on the phone taking orders and offering advice in equal measure during the bidding, also commented on the lengthy battle that ensued for the filly, saying: "I told him ‘Go again, you've got to'. You have a choice, either you want to buy the best fillies and you've got to pay for them or you weaken out and you'll always end up under.

"You either walk away every time and say ‘I missed out, they were too dear' and then watch someone else running them in 12 months time, or you can try and get the best, and I think we've done that."

The filly boasts a superb pedigree, with her grandam being Monsoon Wedding, a sister to the likes of Group 1 winners Redoute's Choice and Platinum Scissors, and a half-sister to another top-level winner in Manhattan Rain.

There was no let-up in trade as evening drew in, with owner Alan Bell going to A$700,000 for a Fastnet Rock filly from the Coolmore draft.

"She's a gorgeous filly and she's out of a mare I admired a lot as a race filly," said Bell. "I've tracked all of her foals through the sales rings over the years. It's great for Robert Crabtree [breeder] that that nice filly is out there [Catchy], I hope she does us both proud. She's out of a mare that's capable of throwing a good filly."

The strong-looking filly is out of the Fusaichi Pegasus mares Cats Whisker, a two-time Group 2 winner. Her page came with a significant update, as her David Hayes-trained two-year-old sister Catchy has won both of her career starts since the catalogue was printed, with her most recent victory gained in taking style at Caulfield.

The first major strike of the day came from Damion Flower of Jadeskye Racing and trainer Gerald Ryan, who teamed up to secure the Snitzel colt out of Tallow from John Singleton's famed nursery Strawberry Hill Stud at A$650,000.

The colt is the third foal out his Group 3-winning dam, a daughter of Street Cry. "He's a nice, small compact horse. Looking at him, he's a smaller version of Chauffer," said Flower. "That's what we liked about him. Gerald loved him, the way he moves and his attitude. He'd be among the top three Snitzels in the sale in our eyes."

Chauffer was purchased by Flower and Ryan from the Strawberry Hill draft at least year's renewal of the Magic Millions Gold Coast Yearling Sale for A$1.6m, and is now among the field for Saturday's Magic Millions 2YO Classic.

"Gerald's happy with him," reported Flower. "Everyone's happy with him so we're looking forward to those six furlongs. It looks like there's a lot of pace in the race and he'll be hitting the line harder than anyone else, I know that."

FIRST PUBLISHED 2:16PM, JAN 13 2017
When you're trying to buy colts that will be future stallions there's no better sire line to target