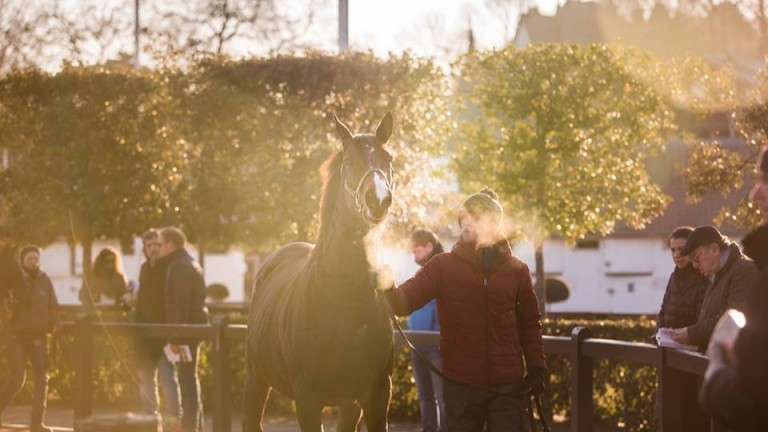 Arqana: the December Sale ended with around a ten per cent reduction in turnover
Zuzanna Lupa
1 of 1
By Isabel Mathew 8:39PM, DEC 6 2016

Buyers did not miss out on the opportunity to purchase one of the best French National Hunt pedigrees around on the final day of Arqana's Breeding Stock sale on Tuesday when Boreale Du Berlais was sold for €210,000.

After a fierce bidding war that included the Papot family, France's leading jumps owners, it was Anthony Baudouin of Haras du Hoguenet who had the final say for the four-year-old daughter of Presenting, who is in foal to Saint Des Saints.

"She's for an existing client who already has mares with me and wants to develop his breeding interests further," said Baudoin, who signed for the dual Listed hurdle runner-up under SARL LJ Negoce.

"He has already bought into some of the late Comte de Montesson's pedigrees, and this was a good addition."

Boreale Du Berlais is the first foal out of Listed Hurdle-winning King's Theatre mare Bonita Du Berlais, a half-sister to Group 1 Prix Cambaceres winner Bonito Du Berlais, in addition to talented performers Nikita Du Berlais and Carlita Du Berlais. She was sold with a free nomination to Muhtathir next year from France Galop.

Purchased on behalf of David Futter of Yorton Farm Stud, the 11-year-old was another who was part of a selection of mares offered by Jean-Marc Lucas's nursery, Haras du Berlais.

"I'm delighted to have been able to buy her as I've always been trying to get into the family," Futter said of the daughter of Mansonnien, a half-sister to stakes winners over jumps Madison Du Berlais, Hilton Du Berlais, Jameson Du Berlais and Shanon Du Berlais.

Offered in foal to Masked Marvel, Houston Du Berlais will visit one of Futter's resident stallions next year, with a view to her progeny returning to race in France in the future.

In buying Houston Du Berlais, the Yorkshireman also continued his link with the 'Berlais' family, having recently bought winning hurdler and chaser Clovis Du Berlais to stand his first season next year at Yorton Farm. Runner-up in a Grade 2 Hurdle in France, the son of King's Theatre will stand at a fee of £2,250.

The underbidder on Houston Du Berlais, Guy Petit had signed for dual Listed Hurdle-winning mare Tornada for €70,000 a little earlier.

Offered from Mathieu Daguzan-Garros's Haras des Granges, the seven-year-old daughter of Ballingarry was sold in foal to Martaline.

"She's been bought for a French client who breeds Flat horses, but has decided to move into jumpers as well," Petit said.

A daughter of the Cadoudal mare Tourmaline, Tornada is a half-sister to this year's Listed Hurdle winner Tourwell as well as three-year-old Diamont Drop, the winner of two of his four starts over jumps. Her dam had also been runner-up at the same level.

Just a lot earlier, Tornada's winning three-parts sister Tour Ambition by Poliglote had been led out unsold for €40,000 in foal to Kapgarde.

Petit had shown his liking for Martaline at the beginning of the sale, when securing a share in the leading National Hunt sire for €40,000.

"I've bought it on behalf of a new French client who is investing in some top mares and wanted to have an interest in a good stallion," the agent explained.

Standing at Haras de Montaigu for a fee of €15,000 next season, the 17-year-old son of Linamix currently lies third in the French National Hunt sires' table.

His top earners include dual Grade 1-winning chaser Dynaste, Albert Bartlett Novices' Hurdle victor Very Wood, and top French mare Kotkikova, who was bought by JP McManus over the summer. A previous share in Martaline was sold on Arqana Online last year for €50,000.

The Martaline connection continued when one of his daughters in foal to Apple's Jade's late sire Saddler Maker, the only one catalogued in the sale, went to David Minton of Highflyer for €45,000.

By Martaline, Cardline won five times over jumps and is a sister to Auteuil Listed Hurdle runner-up Another Sensation as well as three-year-old filly Voix Card, the winner of her only start to date.

The four-year-old was offered from Jean-Pierre and Guillaume Garcon's Haras de l'Hotellerie.

"She's been bought for a breeder in Gloucestershire," Minton said. "She's as good a walker as I have seen, and obviously stock by her covering sire are now a precious commodity," he added of the recently deceased sire.

A little earlier, Minton had also struck for a foal by Great Pretender out of a half-sister to Grade 1 Scilly Isles Novices' Chase winner Medermit for €41,000.

From the family of Chepstow Finale winner Phar Bleu, the colt is out of four-time Flat-winning Diamond Prospect mare Queen Place, already the dam of Grade 1-winning chaser Hinterland and Listed-placed Lofte Place.

"I'm delighted to have got him, as he's got a lovely pedigree and the dam has already produced some very talented performers. The plan is to bring him back to the stud and then we will decide what will happen," Basquin said.

The Frenchman also went to €40,000 to secure a son from the first crop of Masked Marvel out of Listed Hurdle runner-up Sainte Russy from the close family of Bounce Back that goes back to Lope de Vega.

Continuing on from Monday's theme, the clearance rate of just over 77 per cent showed an increase from last year, while the average of €16,130 was down 24 per cent.

With a tricky market during the last three days after a strong first session, which reflected the global trend for the lower echelons, final figures showed at total turnover of €23,156,500 for the four days, down just over 10 per cent.

FIRST PUBLISHED 8:39PM, DEC 6 2016
She's as good a walker as I have seen, and obviously stock by her covering sire are now a precious commodity