Derab is the ninth foal out of Juddmonte's star producer Concentric 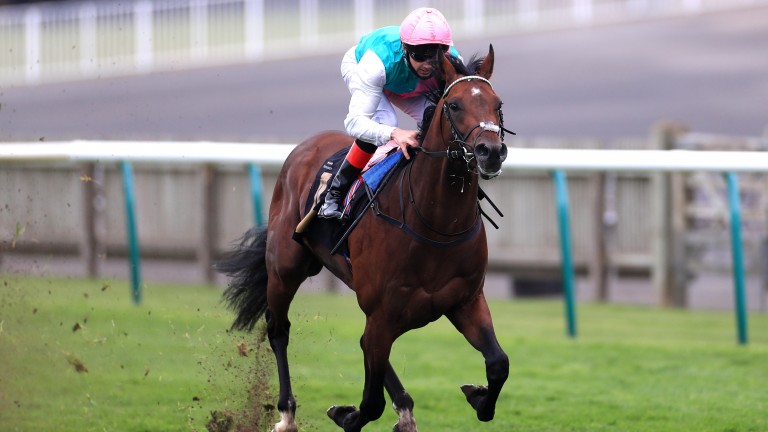 Derab: Sea The Stars half-brother to Enable strikes at Newmarket in an impressive manner
Pool
1 of 1
By Kitty Trice 4:27PM, MAY 14 2021

Second on his first two starts, to the subsequent Tattersalls Stakes winner and Craven runner-up La Barrosa, then to the promising Snow Lantern at Newbury last month, Derab came home six and a half lengths clear of pricy Arqana purchase Fireworks in the mile novice contest.

The John and Thady Gosden-trained colt, who holds an entry in the Cazoo Derby next month, is the ninth foal out of the brilliant Concentric, a stakes-winning and Group 3-placed daughter of Sadler's Wells and Apogee, a Group 3-winning half-sister to Grand Prix de Saint-Cloud runner-up Daring Miss.

The Juddmonte-homebred hails from an outstanding immediate family too, being a half-brother to the phenomenal 11-time Group/Grade 1 winner Enable, who has now settled down to life as a  broodmare after being covered by Kingman this season.

An impressive victory @NewmarketRace for Derab, a Sea The Stars half-brother to the great Enable. He's pictured below as a foal at Banstead Manor Stud #FlashbackFriday #FoalFriday pic.twitter.com/EfwEl6s6Ru

The daughter of Nathaniel conquered the racing world during her stellar career with wins in three King Georges, a Breeders' Cup Turf, the Oaks, Irish Oaks and two Yorkshire Oaks among an outstanding CV headed by those two Arcs.

Concentric has also produced Contribution, a Group 2-placed daughter of Champs Elysees; Entitle, by Dansili and runner-up in the Musidora Stakes; Portrush, a winning daughter of Frankel; and the winning pair of Centroid (Dansili) and Tournament (Oasis Dream).

The 17-year-old Concentric recently returned to Nathaniel this breeding season.

FIRST PUBLISHED 4:27PM, MAY 14 2021
Derab came home six and a half lengths clear of pricy Arqana purchase Fireworks in the mile novice contest