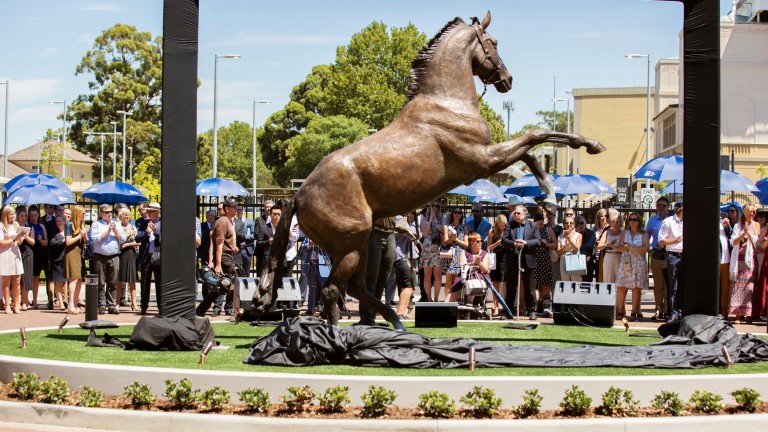 The second renewal of The Chairman's Sale will be held at the new Inglis Riverside complex
Jenny Evans / Inglis
1 of 1
By Lydia Symonds UPDATED 10:35AM, FEB 28 2018

Group 1 performers Gypsy Diamond and Heatherly are the early headline entries received for the second renewal of the Inglis Chairman’s Sale for Elite Breeding Prospects, which will take place at Riverside Stables on April 12, a day after the conclusion of the auction house’s Australian Easter Yearling Sale.

Gypsy Diamond, who will be offered in foal to one of Australia’s leading sires I Am Invincible, won four of her 27 starts including the Group 2 Moonee Valley Fillies Classic and Group 3 Carbine Club Stakes and also finished second in the Group 1 Queen Of The Turf Stakes in 2014.

She is part of an 11-strong group of mares being offered in an unreserved reduction sale by Finemore Thoroughbreds and Planette Thoroughbreds at the breeding stock sale in April.

The Finemore/Planette draft also includes mares in foal to the likes of leading stallions Snitzel, Not A Single Doubt and Savabeel.

Meanwhile, Group 2 Rubiton Stakes winner Heatherly will be offered in foal to the Woodside Park-based sire Written Tycoon. The daughter of Lonhro won six of her 18 starts and was placed at elite level on two occasions, including running second to Extreme Choice in the 2016 A J Moir Stakes.

Entries for the boutique sale close on March 2, but among the confirmed lots already confirmed is a share in Golden Slipper Stakes  winner and top-class sire Sebring and a lifetime breeding right in Yarraman Park’s star sire I Am Invincible.

Among the weanlings set to go through the ring at the sale is the Outreach half-brother to talented two-year-old Fiesta, who took out the Group 3 Widden Stakes earlier this month and the So You Think  three-quarters brother to stakes winner Theanswermyfriend.

They join other weanlings by Australia’s champion sire Snitzel, Vancouver, Pride Of Dubai, Dissident, Shooting To Win, Fastnet Rock and Press Statement and mares in foal to the likes of Coolmore shuttlers Fastnet Rock and American Pharoah and barn mate Pierro  will also go under the hammer at the sale.

Meanwhile, other offerings including mares in foal to Snitzel, Capitalist, Sebring, I Am Invincible and Exceed And Excel also look set to be offered as well as a world-class consignment of 11 horses by Waratah Thoroughbreds as part of its broodmare dispersal.

Included in the race fillies section of the sale is a full sister to the recent Group 3-winning Ennis Hill and Golden Slipper Stakes placegetter Lake Geneva.

Inglis’ general manager of bloodstock Jonathan D’Arcy is excited by the calibre of horses to be catalogued.

“We are fielding enquiries every hour from leading owners and breeders who want to be a part of the Chairman’s Sale revolution,’’ D’Arcy said.

“There will be no better time to offer top class weanlings and breeding stock than immediately after the Easter Yearling sale at Riverside.

“This sale is only going to get stronger judging by the quality of entries coming in and with entries closing shortly vendors need to act now to ensure they don’t miss out.”

FIRST PUBLISHED 5:58PM, FEB 22 2018
There will be no better time to offer top class weanlings and breeding stock than immediately after the Easter Yearling sale