Gutaifan, Ivawood and Outstrip gunning for first winner this weekend 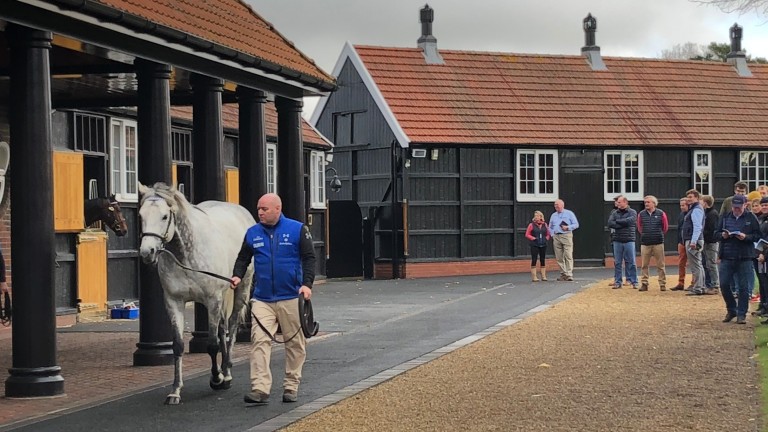 Gutaifan, Ivawood and Outstrip are among those in line to potentially record a landmark success on Saturday.

The day’s two-year-old events in Britain and France - the Brocklesby Conditions Stakes at Doncaster and Prix du Debut at Saint-Cloud - have attracted 52 entries between them, several of whom will be looking to provide a first winner for their young sires.

The Brocklesby boasts a roll call led by The Last Lion and Hearts Of Fire, both subsequent Group 1 winners, and with 25 entries, it again looks to be a typically competitive affair.

The group includes a pair of pricey colts in Kilham and Strong Power, bought for 62,000gns and €65,000 as yearlings; Declan Carroll’s Kilham is a Pivotal grandson of 1,000 Guineas heroine Russian Rhythm while George Scott’s Strong Power is a Kodiac relation to Slade Power.

Hannon, of course, saddled Ivawood to win the July and Richmond Stakes while his own sire, Zebedee, was another conditioned at Herridge.

The Castlehyde Stud stallion has approximately 100 two-year-olds to run for him this season, including a colt out of Quickstep Queen who sold as a foal for 105,000gns to Amanda Skiffington on behalf of Ivawood’s racing owner Fiona Carmichael - now named Hurricane Ivor, he is with Fabrice Chappet.

Ivawood could also be represented at Dundalk on Friday by Jessica Harrington’s For The Trees.

The stallion has already had one runner in the filly Miss Tiche, who made her debut at Saint-Cloud on March 17.

Tough sprinter Music Master, a Group 3-winning half-brother to Twilight Son, may not have the same numerical firepower as Ivawood but he could also be in line to get off to a flyer should his daughter Anna Fallow be declared at Doncaster on Saturday. The filly, trained by Ronald Thompson, is one of 15 two-year-olds for Music Master, who stands at Throckmorton Court Stud.

Also represented within the early entries are the Darley Club pair of French Navy, sire of the Brian Ellison-trained Paddy Elliott, and Fulbright, sire of the David Loughnane-trained Richard Rhb.

On what could be an insightful few hours for supporters of the club, the afternoon could also feature the first runners for Outstrip and Hunter’s Light in the Prix du Debut at Saint-Cloud.

The first runner for Dalham Hall Stud’s Outstrip could come in the form of Autumn, trained by Henk Grewe. The colt was his sire’s seventh dearest yearling to change hands last year, selling for €40,000 to HFTB Racing Agency at the Arqana October Sale.

Hunter’s Light, meanwhile, could be represented by the filly Marateca, although she also holds an entry on Friday at Bordeaux Le Bouscat.

Overall, the Prix du Debut has attracted 27 entries, including a first entry for Yeomanstown Stud’s Gutaifan in Real Fan. A representative of the powerful Matthieu Palussiere - Con and Theresa Marnane axis, the filly was picked up by connections for €7,000 at last year’s BBAG September Sale.

A high-class two-year-old himself from a sire line associated with speed, Gutaifan enjoyed a strong showing at last year’s yearling sales, where his youngsters sold for up to €360,000. With 163 two-year-olds on the ground, he also has the largest firepower of any first-season sire in Europe this year.

FIRST PUBLISHED 4:58PM, MAR 25 2019
The first runners for the Darley Club stallions will hit the track on Saturday