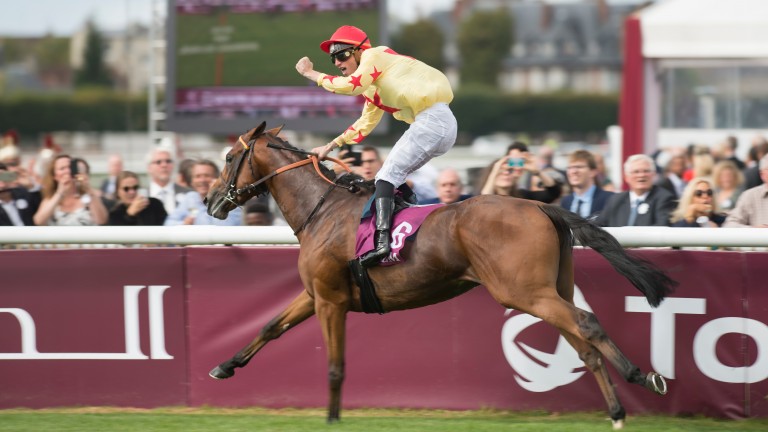 National Defense, the Group 1-winning son of Invincible Spirit, will shuttle to Victoria’s Sun Stud for the forthcoming southern hemisphere breeding season where he will stand for a fee of A$11,000 (£6,050/€6,970).

Based at the Irish National Stud, National Defense was due to stand his first season at the Victorian operation in 2018, but had to bypass the trip after picking up a minor injury.

The winner of the 2016 Prix Jean-Luc Lagardere at Chantilly when trained by the now retired Criquette Head-Maarek, the stallion is currently covering his second book of mares in northern hemisphere, having covered 64 mares last year.

"National Defense was a brilliant juvenile who absolutely streeted his rivals and, not only is he an outstanding type, he's by one of the most influential sires in the world.”

Sun Stud's sales and nominations manager, Mark Lindsay said: "We couldn't be happier with the 'team' for 2019 and the National Defense announcement comes off the back of terrific results recently from Sun Stud stallions such as Fiorente, who this month notched up his third stakes winner with the Lindsay Park trained two-year-old, Power Scheme.

"Sun Stud will again offer the best terms available to breeders, with no payment due until live foal."

National Defense will be one of ten stallions standing at Sun Stud this year, which also includes Melbourne Cup winner Fiorente, whose success on the track this season has earned him a fee hike, with the stallion set to stand 2019 at A$27,500 - up from A$17,600 last year.

Fresh from siring his third stakes winner on Saturday in the form of Mr Marbellouz, Love Conquers All will again stand for A$8,800, while his barnmate Thronum, who covered his first book of mares last season, will stand for A$11,000.

Palentino, the Group 1-winning son of Teofilo, will stand for an unchanged fee of A$17,500, with his first weanlings set to be offered at the upcoming sales.

Ready For Victory's first crop hit the track next season and he will again stand at a fee of A$6,600, while Magnus has been subject to a slight fee cut and will stand for A$16,500.

The roster is completed by veteran sire Bel Esprit, whose 86 winners (81 Australia, 2 New Zealand, 2 Malaysia, 1 Hong Kong) so far this term include Listed-winning pair Tactical Advantage and Belwazi, will be offered to breeders at a fee of A$11,000.

All fees include GST.

For complete coverage of racing and bloodstock in Australia and New Zealand, download ANZ Bloodstock News every day by clicking here

FIRST PUBLISHED 5:51PM, APR 22 2019
We've been looking for a champion two-year-old by Invincible Spirit and believe National Defense is definitely the chosen son