Son of Excelebration will take up stud duties at a fee of £10,000 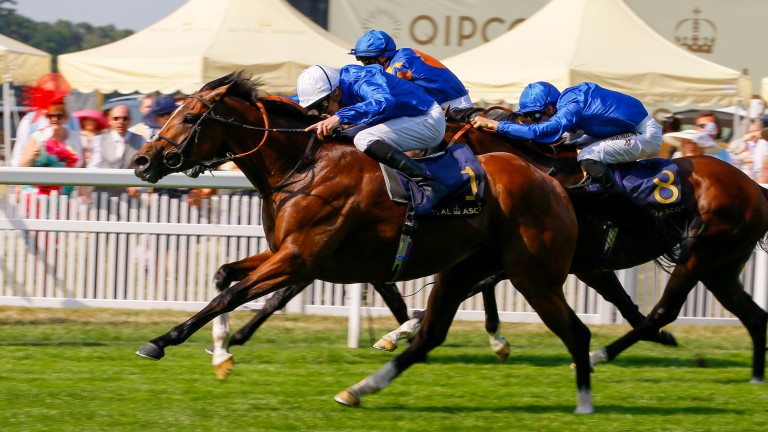 Barney Roy, Godolphin’s St James’s Palace Stakes-winning son of Excelebration, has been retired from racing and will take up stallion duties at Dalham Hall in 2018 at a fee of £10,000.

“Barney Roy was the leading miler of his generation, and ran with great credit over ten furlongs too, beaten only a nose in the Eclipse in a time that would have won him almost any other running” said Darley’s director of stallions Sam Bullard.

“If his stock inherit his zestful way of running and ferocious tenacity in the finish, they will surely do well. We are very proud of the enormous success of Exceed And Excel and his stallion sons and we are delighted to have the first of his grandsons join the Darley roster.”

Trained by Richard Hannon throughout his seven-race career, Barney Roy made a winning two-year-old debut over a mile at Haydock, a performance that prompted Godolphin’s purchase of the colt.

He reappeared at three with an authoritative two-length success over Dream Castle in the Greenham Stakes, an effort that was followed by a gallant second in the 2,000 Guineas.

On just his fourth start Barney Roy tackled the Group 1 St James’s Palace Stakes at Royal Ascot, and not only decisively reversed the form with his Guineas conqueror Churchill but also broke the track record by almost two seconds. When asked for his effort with two furlongs to run Barney Roy’s huge stride quickly carried him to the front before he kept on stoutly to see off Lancaster Bomber by a comfortable length.

He proved his versatility as well as his toughness on his next outing when he narrowly lost out in a titanic battle with Ulysses in the Coral-Eclipse over 10f.

“Barney Roy is by far the best colt I have trained and the most athletic horse I have seen,” said Hannon. “We look forward to seeing his yearlings at the sales.”

Barney Roy was bred by the Hong Kong-owned and Australian-based Eliza Park - who has since rebranded as Sun Stud - after the outfit purchased his dam, Alina, for 65,000gns at the Tattersalls December Mares Sale in 2013.

Alina is a daughter of the all conquering Galileo, meaning that Barney Roy is bred on the reverse of the hugely fruitful Galileo - Danehill cross that has supplied the likes of Frankel, Highland Reel and Teofilo. Tough-as-teak sprinter Gordon Lord Byron appears among Barney Roy’s near relatives, while it is also the family of Broodmare of the Year Too Bald, who produced, among others, the US stallion Capote.

Dam of Barney Roy is in foal to Dubawi

FIRST PUBLISHED 12:20PM, NOV 17 2017
If his stock inherit his zestful way of running and ferocious tenacity in the finish, they will surely do well