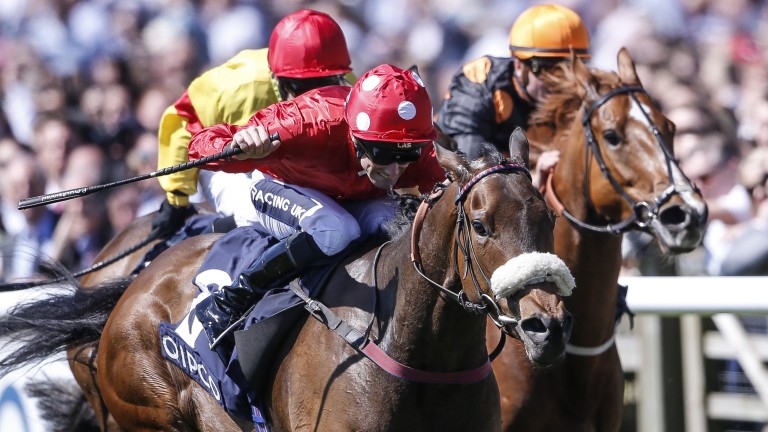 Mabs Cross becomes an 11th Group winner for Ducth Art with success in the Palace House Stakes
Alan Crowhurst
1 of 1
By James Thomas UPDATED 8:01PM, MAY 5 2018

The Group 3 Palace House Stakes has been used as a springboard to top-flight honours by the likes of Marsha, Goldream, Sole Power and Mayson in recent years, and given the sharp upward curve that Saturday's winner - Mabs Cross - is on, her connections are well entitled to harbour Group 1 ambitions of their own.

The Michael Dods-trained filly is certainly bred to be fast, as she is by Dutch Art, who landed the Prix Morny and Middle Park Stakes, both over 6f, as well as the 5f Norfolk Stakes during his racing days.

The David Armstrong-owned four-year-old is one of 11 Group winners by Cheveley Park Stud resident Dutch Art, whose best performers include another horse who carried the same silks as Mabs Cross, Prix Maurice de Gheest winner and freshman sire, Garswood.

Moreover, Mabs Cross was bred by Armstrong's Highfield Farm out of Miss Meggy, a daughter of Pivotal who landed the Listed Hilary Needler Trophy, an event that has been won by some notable producers down the years.

Other fillies successful in the Hilary Needler include Dance Parade (1996) - the dam of St Leger and Gold Cup hero Leading Light, Flanders (1998) - the dam of Haydock Sprint Cup winner G Force, and 2003 winner and subsequent 1,000 Guineas heroine Attraction - the dam of Elarqam.

Miss Meggy has produced four winners, including the Grade 3 winner Charlie Em, and also has a two-year-old colt by Invincible Spirit and a yearling colt by Iffraaj.

Miss Meggy was trained in the latter stages of her career by Julie Camacho, who was responsible for the horse who finished runner-up to Mabs Cross at Newmarket on Saturday, Marsha's Iffraaj half-brother Judicial.

The cross of Dutch Art over Pivotal has been responsible for 28 winners, including the Group 3-winning Zonderland, Listed winner Zarwaan and Wokingham Stakes scorer Baccarat.

Mabs Cross's victory was also the first leg of a stakes-race double for Pivotal as damsire, with Defoe - a son of Dalakhani out of Dulkashe - landing the Group 2 Dunaden Jockey Club Stakes later in the afternoon.

'Elarqam is the spitting image of Attraction'

FIRST PUBLISHED 3:57PM, MAY 5 2018
Mabs Cross was bred by Armstrong's Highfield Farm out of Miss Peggy, a daughter of Pivotal who landed the Listed Hilary Needler Trophy over 5f