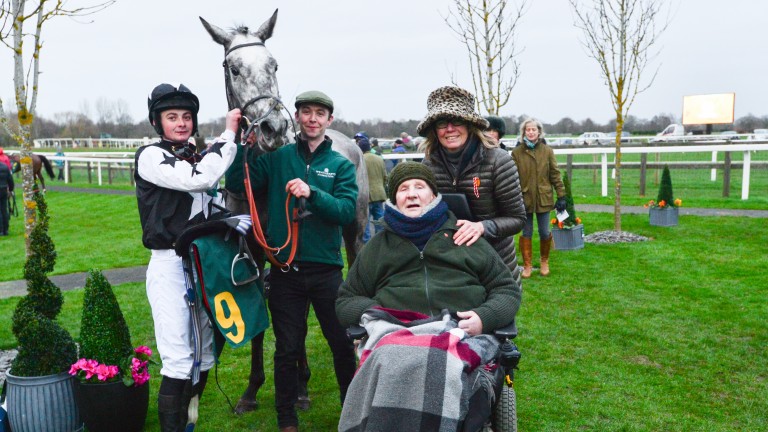 Whether Martello Sky heads for the Cheltenham Festival or just up the road to Fakenham next week, one suspects her owner-breeder would not have minded too much.

The grey mare, a winner of four of her six starts, follows a tradition among those carrying Tim Wood’s black and white colours with trainer Lucy Wadham as she is a daughter of his very useful Kentucky Sky.

The Norfolk businessman, who was absorbed by his hobby and was a regular at his local track, died last summer and his brother Simon and sister Catherine have taken on his smart young prospect under the Sky Partnership.

"They were always grey horses, his wife Sue was obsessed with them," explains Simon Wood. "Her expression was, 'I like white ones' - she thought they tried harder.

"The mare came from Doncaster sales. Since then he’s bred probably six, seven foals, sold the boys and kept the girls, and every single one that has run has won."

Tim Wood was originally more interested in point-to-pointing but later switched to National Hunt, establishing a happy link with Newmarket-based Wadham which spanned many years.

His brother says: "He had a couple of Flat horses, then an ex-Juddmonte one called Approved Force, who won a couple including a decent hurdle at Sandown but didn’t like fences, and Manshoor; the highlight of him for Tim was the fact that [Tony] McCoy rode him, and he was a bit of a hero to him."

The appreciation was not exactly returned with interest by the multiple champion jockey. 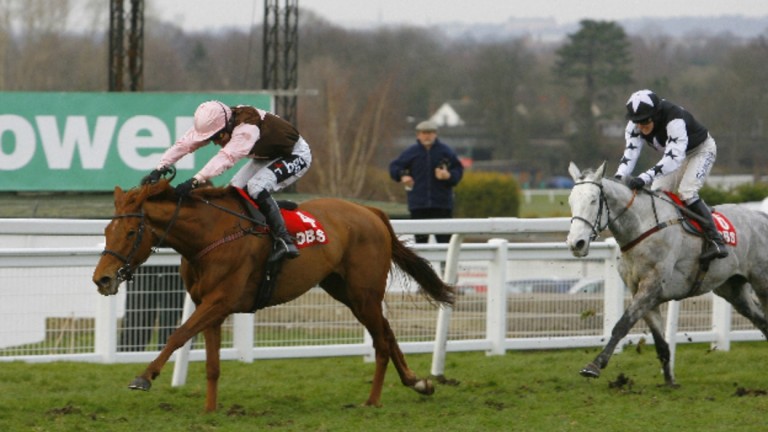 Simon explains: "The sad thing about poor old Kentucky Sky was that while she was very useful in bumpers - she was runner-up in the Listed bumper final at Sandown - when Mr McCoy [on Golden Sunbird] got her boxed in on the last bend, he wouldn’t let her out.

"McCoy got out and was two lengths in front, and we never regained it. Sadly he didn’t do us favours! She then had a problem and never went hurdling, I’m sure she would have been a brilliant hurdler."

Tim Wood retired the Cloudings mare to Louise Kemble’s Elms Stud and she has produced multiple winners in his colours such as Iconic Sky and Mystic Sky, plus Brief Ambition, who was sold and took a bumper for Fergal O’Brien.

The first-named achieved Fakenham infamy when Maxime Tissier added himself to the list of those to ride a finish a circuit too early yet still managed to finish third behind the smart Le Breuil.

He has bequeathed quite a racing legacy but it is shrouded with sadness. Tim Wood was paralysed from the shoulders down in a hunting accident nearly eight years ago, and Sue predeceased him in 2017. Known for his wealth of amusing anecdotes, he continued to make business decisions and attend Fakenham with his carers.

"He never gave up, and the one thing that kept him going was the horses," says his brother. "I travelled thousands of miles with both of them in the car to the likes of Lingfield and Chepstow. We had some bad days, as you do, but some very good days too and it gave him a great deal of pleasure."

Simon and Catherine cannot keep their elder brother's entire collection; Tim could sustain having racehorses and broodmares after running a successful parcel delivery service in Norwich, as well as owning property and farmland, but bills do accumulate.

The 19-year-old Kentucky Sky will see out her time with Kemble and six-time winner Mystic Sky has been sold for breeding, but they retain great enthusiasm for her half-sister, who will either aim for a fourth win at the Woods’ home track next Friday or take a marked step up in class for Thursday’s Parnell Properties Mares' Novices' Hurdle at the festival.

"There's a debate what we do next," admits Simon. "The last thing I’d want to do is thrash the horse on a hard course like Cheltenham. Yes she’s won twice over hurdles, but they’ll go a hell of a pace and we’ll be surrounded by Mr Mullins and all the others.

"I’d like to keep her racing for another few years - the one trait the Kentucky horses have is that they stick their necks out and try."

The Sky Partnership now includes a number of others from the farming community around Fakenham, such as father-and-son John and Toby Sexton, with Simon Wood continuing: "The whole lot were owned by Tim but we very much hope to continue with it. One of the things I made plain was that Martello would run in Tim’s colours, and so will the others.

"Myself and my sister have two shares each, but what gave me great confidence at the start is that our trainer has got a share! When I said that was wise, Lucy replied, 'You don’t think I’m stupid, do you?'

"Next in line from Kentucky is a yearling by Blue Bresil. I’ve decided to keep her with friends of mine. We’ll hopefully have Martello going for a few years, by which time the Blue Bresil - who is also great, I may add - could then carry on."

Catch up with our stories on Kind

David Milnes on a trip to Banstead Manor enlivened by Kind

FIRST PUBLISHED 4:00PM, MAR 9 2021
We had some bad days, as you do, but some very good days too and it gave him a great deal of pleasure