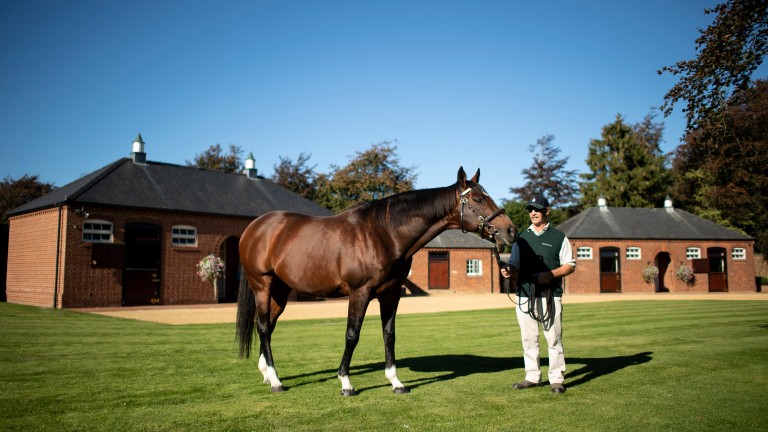 Frankel has a new star in Japan - and a 12th top-flight winner of his stallion career - as Grenadier Guards took the Asahi Hai Futurity Stakes at Hanshin in a track-record time.

A winner on his third outing in a maiden at the same course, the colt sat off a brisk pace set by Mondreise before Yuga Kagawa made his move half-way down the straight.

Leading with a furlong left, Grenadier Guards repelled a late challenge by leading fancy Stella Veloce to score by three-quarters of a length.

Kagawa said: "My concern was to keep him happy and in good rhythm because the colt has a difficult temper and can run off like he did in his second career outing so you have to be careful to keep him controlled, but he has great potential if he can bring out his best and I am looking forward for another good season for him next year."

Japan has been good to Frankel, who was adding a race similar to the Dewhurst in terms of prestige to his CV, as four years ago Soul Stirring gave him a first ever Grade or Group 1 win by lifting the fillies' equivalent. He has sired 23 winners from 43 Japanese runners so far.

Only last week his son Mozu Ascot, who had top-class victories on both turf and dirt, arrived at Arrow Stud to begin his own stallion career.

Grenadier Guards is Japanese-bred by Northern Racing but epitomises the country's cosmopolitan approach to bloodstock.

He is the first foal of Canadian-bred Wavell Avenue, whose sire  Harlington is not a household name but is out of the brilliant Serena's Song.

Wavell Avenue won the 2015 Breeders' Cup Filly & Mare Sprint and narrowly failed to retain the title the following year. Exported to Japan, she has subsequently produced a yearling filly by the late Deep Impact and a filly foal by Lord Kanaloa.

FIRST PUBLISHED 12:27PM, DEC 20 2020
You have to be careful to keep him controlled, but he has great potential if he can bring out his best