Great and good from jumps game restock for battles ahead 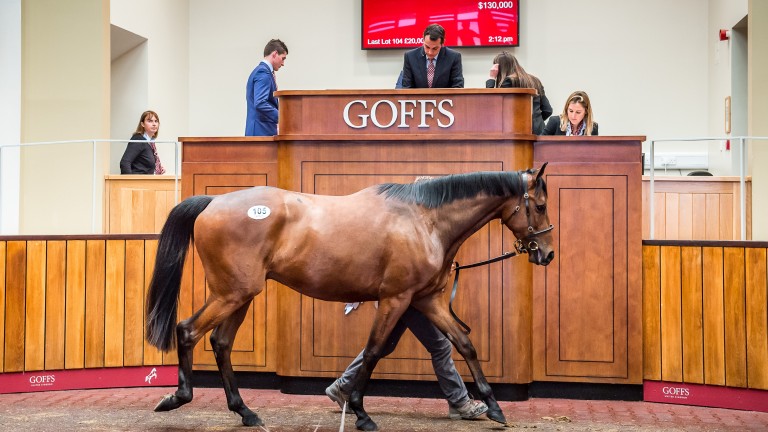 There were clear signs of the good health of the National Hunt market at the Goffs UK Spring Store Sale on Tuesday, as the great and good from the jumps game descended on Doncaster to restock ahead of the upcoming winter campaign.

The joint-top price of £100,000 may fallen below the high mark set at the 2016 renewal, albeit only by £5,000, but despite the absence of a standout lot the sale generated a blinding set of returns.

The first lot to fetch a six-figure sum was a three-year-old from the first crop of the ill-fated Gold Cup winner Fame And Glory that went the way of Gordon Elliott.

The gelding is the second foal out of the Saddlers’ Hall mare No Bodys Flame, who also has a two-year-old sister and yearling brother to the gelding, who was pinhooked by Niall Bleahen of Liss House for €21,500 from the Tattersalls Ireland November National Hunt Sale.

“He was a pure athlete from the second I bought him,” said Bleahen. “He has the attitude to match as well, it’s no secret Montjeu has been known to pass on a bit of temperament, but this lad is perfect and has oozed class right from the start - I think he’s going to be very good.

“His family doesn’t suggest that he’ll be early but I’d say he’ll be worth waiting for. We always like to put a good horse into this sale as there’s always plenty of clients here,” added Bleahen, who has around 20 three-year-olds to sell this store season.

Despite facing some stiff competition from the queue for the ice cream van, the bidding areas in a balmy Doncaster noticeably filled as the second lot to bring £100,000 made his way around ring. The three-year-old son of Diamond Boy, named Epson Du Houx and consigned by Richard Hobson, was signed for by Mouse Morris.

There may be a distinct lack of black-type on the French-bred’s page, but what the long-striding three-year-old lacked in pedigree he more than made up for in physique. 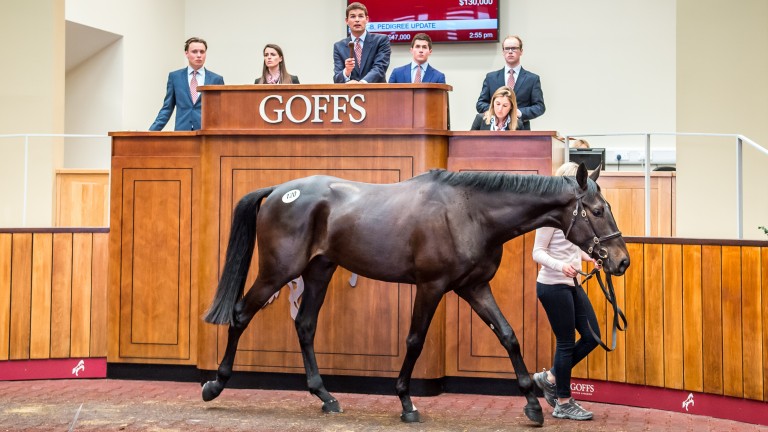 Lot 120: the French-bred son of Diamond Boy was sold to Mouse Morris for the joint sale-topping sum of £100,000

One of the themes of the session was the demand for the progeny of the late Jeremy, with the most expensive of his five catalogued lots going the way of Kieran McManus, son of leading owner JP, for £95,000.

The three-year-old, from the penultimate crop of the former Garryrichard Stud resident, was offered by Norman Williamson’s Oak Tree Farm and was signed for by the vendor as a foal at €24,000.

“He was a nice foal, but Jeremy wasn’t that popular when I bought him,” said Williamson. “Of course the likes of Jer’s Girl have come along since, and his half-brother, On Fiddlers Green, looks a decent chaser. But he was always a beautiful individual. He shouldn’t take a lot of time and I can see him being a very good hurdler to begin with. I just hope he’s lucky for his new owners.”

The gelding is out of the unraced Executive Perk mare Knockalane, and is a half-brother to Henry De Bromhead’s On Fiddlers Green, who was placed third behind Shaneshill in a Grade 2 novice hurdle and now has a Racing Post Rating of 134 over fences.

All five of Jeremy's progeny in the catalogue changed hands, generating an aggregate of £285,000 and an average of £57,000. The son of Danehill Dancer stood at a fee of just €3,000 in 2013, when his current crop of three-year-olds were conceived.

McManus was responsible for signing for another of Jeremy’s sons, with the three-year-old out of Teffia Gold requiring a bid of £58,000, and he also secured a Martaline gelding from the family of Lacdoudal and Questarabad for £72,000.

Colin Tizzard looks set to launch a serious challenge in the jumps' trainers title race over the winter months, and the trainer bolstered his squad with a son of the ever-popular Robin des Champs with a bid of £90,000.

“He’s a lovely individual, by the right sire and out of a good mare,” said Tizzard of the three-year-old, who is out of of the Grade 3-placed hurdler Jay Lo. “He’s been bought for Brocade Racing. A lot of these horses won’t be for next year but the year after, so it’s a long old job.

“We’ll back him as soon as he gets home. He’s been at the sales for a week so he must be knackered, we’ll take our chance to get on him for the first time while that's the case!”

Consigned by Sluggara Farm, the three-year-old returned a tidy profit on his purchase price as a foal, having been picked up by Springmount Stud for €23,000. 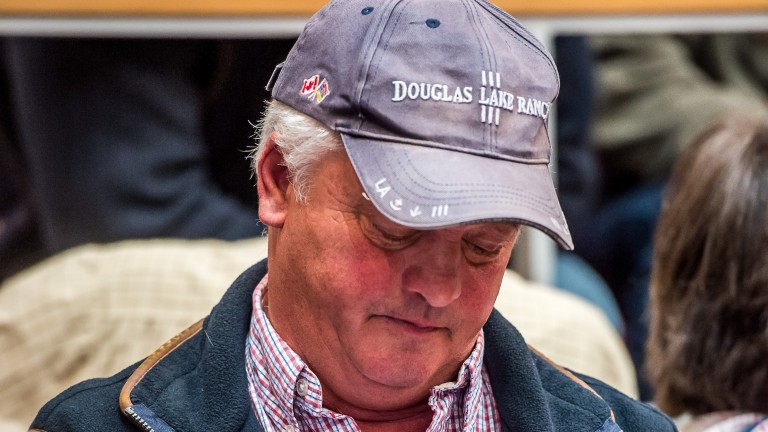 Among the catalogue's most eyecatching pages was the Kayf Tara brother to bold-jumping Champion Chase hero Special Tiara consigned by Goldford Stud. The three-year-old is now bound for the man who has overseen the career of the three-time Grade 1 winner, Henry De Bromhead, who secured the gelding for £78,000.

Relatively few sons and daughters of Coastal Path, a Juddmonte-bred son of Halling who stands at Haras de Cercy, have graced the tracks of Britain and Ireland, but plenty of those that have have made their presence felt, notably dual Grade 1-winning novice hurdle Bacardys.

So it came as no surprise to see his progeny on offer in Doncaster attract plenty of interest, particularly the half-brother to the Grade 2 bumper winner Dame Rose offered by Brown Island Stables.

Hinds and Moore enjoyed better fortunes than they would later in the session when a late bid of £85,000 saw off the likes of Jason Maguire and Ryan Mahon.

“We saw him last night and liked him. We didn’t expect to have to pay that much for him, but we did,” said Moore. “He’ll go away to be broken in before we turn him out and then start again. You’d certainly hope he’s the type of horse that can go and win a bumper, and a bit more.”

“We did very well here last year, we bought six, a couple have hit the racetrack and have run well," said Hinds. "We bought Larry who won his bumper first time out. You tend to come back to the sales you get lucky at.”

The new acquisition capped a fruitful 24 hours for Hinds, who was awarded with the prize for leading novice hurdler at the TBA National Hunt awards, having bred Betfair Hurdle winner Ballyandy. 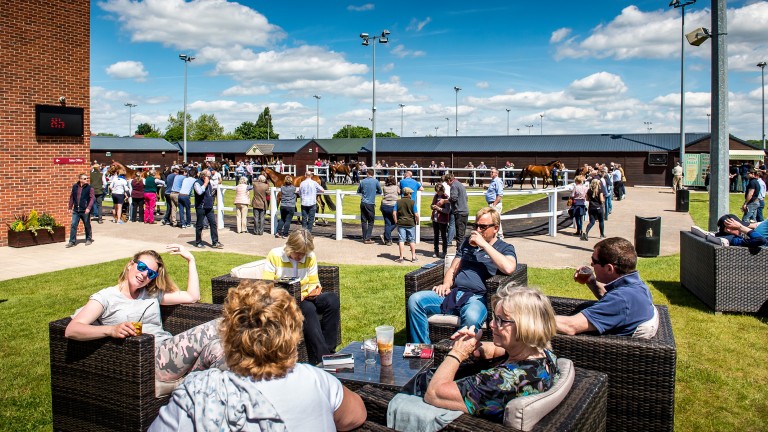 Highflyer’s first significant play came for the son of Malinas out of Friendly Craic, with a bid of £65,000 required from David Minton to see off underbidder Ryan Mahon, stood with Dan Skelton. Skelton’s interest in this gelding looks noteworthy, as he trains one of his three winning half-brothers, the talented Three Musketeers.

“He’s been bought for Middleham Park,” revealed Minton, who was accompanied by the syndicate’s bloodstock and National Hunt manager Tom Palin. “He’ll go to Nicky Henderson. He’s got a great page, and with the way Middleham Park run their syndicates that’s important. Malinas is doing really well - I’m very sweet on him. I’ve had a couple of debutants by him win point-to-points recently."

Minton’s fondness for the progeny of Malinas was also evidenced later in the session, when he went to £78,000 for one of his sons out of Valleyofthedolls.

“He’ll be trained by Nicky Henderson in time,” said the agent. “He’s been bought for George Barlow, and somewhere the word ‘Bear’ will be involved in his name, as the same owner has also had the likes of Bears Affair and Beware The Bear.”

The 16-year-old Malinas, who is currently standing his second season at Glenview Stud, has been responsible for the likes of Harry Fry’s highly rated chaser American, the talented Medinas, and Grade 2-winning chaser Black Thunder.

In his end of sale statement Goffs UK managing director Tony Williams said: "Following huge growth last year, we are truly thrilled with today’s sale which has scaled new heights. For 55 years the Doncaster Spring Sale has been a consistent source of quality and the results today further underline its status as the UK’s leading National Hunt Sale.

Every year we welcome all of the National Hunt fraternity and, with major owners and trainers onsite at Doncaster, the market enjoyed great depth which saw the figures grow to record levels, all driven by a superb 89 per cent clearance rate.

"The atmosphere both in the ring and around the complex has been electric from start to finish – there really is no sale like Doncaster in May."

FIRST PUBLISHED 9:16PM, MAY 23 2017
His family doesn’t suggest that he’ll be early but I’d say he’ll be worth waiting for