Graves gains in every way at Saratoga 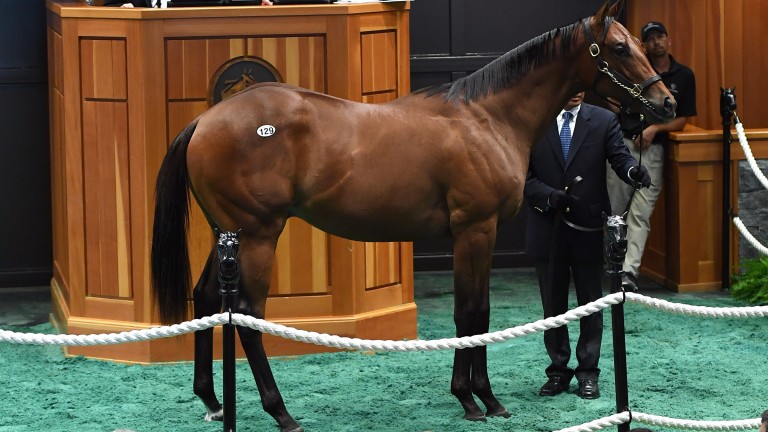 The closing session of the Fasig-Tipton Saratoga selected yearling sale turned into a night to remember for Brian Graves, director of public sales for Gainesway.

As the Kentucky farm led all consignors, with $8,105,000 in sales of 18 horses for an average of $450,278, Graves watched as an Orb colt he co-bred became the joint-sale topper at $1 million when sold to Phoenix Thoroughbreds.

Additionally, two other yearlings pinhooked by Graves with family and friends both generated profits, notably a colt by freshman shuttle sire Animal Kingdom selling for $750,000 following his acquisition for only $110,000 as a weanling.

"We've been very fortunate and it's been a good market, and I guess we had the right horses here," Graves said. "We wish the buyers a lot of luck, and the only thing that would make us prouder would be
to see (the yearlings) go on and win some graded stakes and make everybody happy."

Watching the fancy colt by freshman sire Orb out of graded winner Flashy American light up the board with a $1 million bid from Kerri Radcliffe "was a really special moment."

Graves added: "He certainly looks like a graded stakes horse. [Orb] is a stallion who is in high demand and it looks like he could be the real thing."

He co-bred the colt with Gainesway Thoroughbreds and others. When the colt was offered at the 2016 Fasig-Tipton November sale, the breeders took on Davant Latham, who bought a 33 per cent interest, and another client, who purchased a 25 per cent interest, as partners. Latham, as agent, was listed as buyer at $310,000.

"We decided to stay on with the horse [as co-owners]," Graves explained. "It was fun for everybody."

During the November sales, Graves also was active in selecting weanlings for resale, working alongside his father, Fasig-Tipton vice-president of recruiting and sales Bill Graves, and colleagues. One
of their selections was a bay son of Kentucky Derby and Dubai World Cup winner Animal Kingdom out of a half-sister to Grade 2 winner Indian Firewater.

Another pinhook involved a higher stake, Graves and partners having paid $525,000 for a Tapit filly. But that investment also proved profitable after Radcliffe made the winning bid of $675,000 for the first foal of stakes winner Colonial Flag.

Graves said Clear Ridge Stables is "a group of people I got together to buy horses and resell them for a profit, hopefully – mostly family and friends."

The Orb, Tapit and Animal Kingdom yearlings were all sold at Saratoga under the Gainesway banner, making them doubly successful for Graves. "The market as a whole at this sale has been fantastic," he said. "There's a lot of electricity."