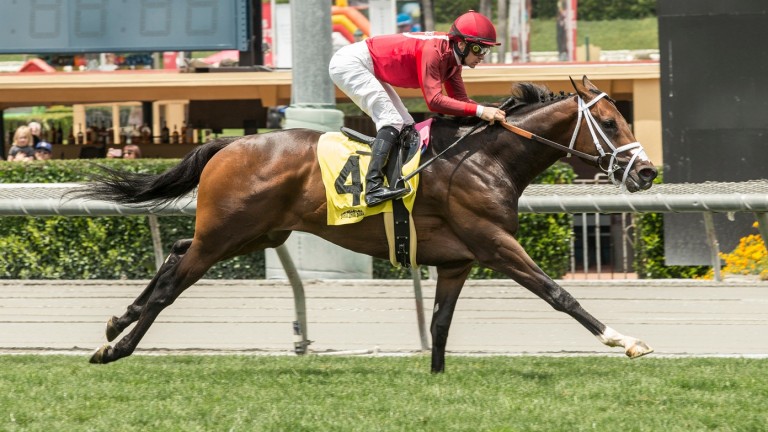 Grade 1 winner River Boyne has joined Tara Stud's stallion roster for 2021, with the son of Dandy Man having been a high-class performer in the United States over the last two years.

The five-year-old, who ran three times for Gordon Elliott at two before switching to Jeff Mullins after selling at the Tattersalls Autumn HIT Sale in 2017, made his top-level breakthrough when defeating Got Stormy in the Frank E Kilroe Mile Stakes at Santa Anita in March, having previously won three times in Grade 2 and 3 company.

River Boyne, a €20,000 purchase from Goffs November Foal Sale when consigned by Tara Stud, and a €65,000 sale to Aidan O'Ryan and Elliott a year later at Goffs Sportsman, is the seventh foal out of the Mark Of Esteem mare Clytha - a half-sister to high-class miler Ventiquattrofogli - and a half-brother to three winners.

Derek Iceton, manager at the County Meath stud, said: “River Boyne has arrived safely and we'll be announcing details of his syndication and nomination fee shortly.

"I’m thrilled to have secured him after closely following his career since his impressive victory at two. He has all the qualities that you would wish to see in a stallion: ultra sound, impressive physique and a great attitude.”

River Boyne is one of three top-level winners for his 17-year-old sire, who currently resides at Ballyhane Stud in County Carlow, and is notably the first son of Dandy Man to retire to stud in Europe.

FIRST PUBLISHED 12:34PM, NOV 13 2020
He has all the qualities that you would wish to see in a stallion: ultra sound, impressive physique and a great attitude