The late Garryrichard Stud resident is also responsible for Our Conor 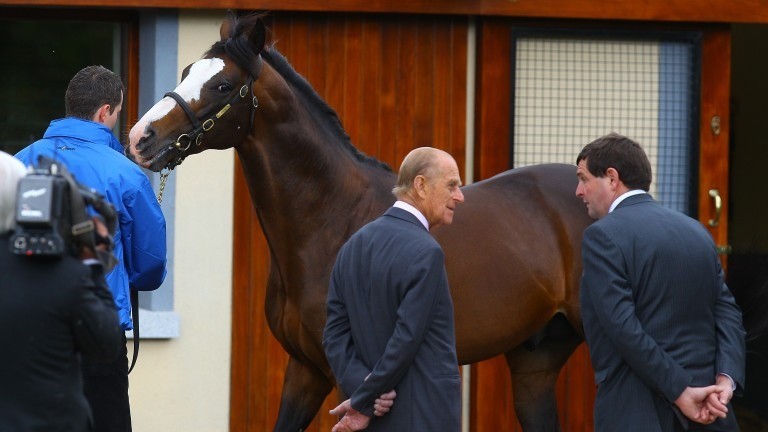 Jeremy, pictured being paraded in front of the Duke of Edinburgh at the Irish National Stud, sired a Grade 1 double at Cheltenham on Tuesday
Patrick McCann
1 of 1
By Kitty Trice UPDATED 11:09AM, MAR 17 2021

The opening day of the 2021 Cheltenham Festival was a further reminder of the late Jeremy's talents as Appreciate It and Black Tears struck a Grade 1 double in the Supreme Novices' Hurdle and Mares' Hurdle apiece.

Jeremy, a high-class son of Danehill Dancer and out of an Arazi half-sister to Japanese phenomenon Deep Impact, struck in the Sandown Mile and Jersey Stakes for Sir Michael Stoute in a 16-race career, but needs little introduction as a sire.

Having already produced the ill-fated but brilliant Triumph Hurdle hero Our Conor, in addition to fellow top-level winners Reserve Tank, Whiskey Sour and Jer's Girl, the 24-length demolition by the Willie Mullins-trained Appreciate It and battling victory of Black Tears added to their sire's already remarkable record.

Having covered 246 mares in his first season at Garryrichard and 221 in 2014 - having stood at the Irish National Stud from 2008-12 - he suffered an injury during exercise and was subsequently put to sleep after breaking bones in his carpal joint while recovering from anaesthetic following surgery.

Two Jeremy winners already @CheltenhamRaces with the impressive Appreciate It and the tough Black Tears What a stallion he was!!

Undoubtedly a bitter blow to lose such a talent aged 11, Jeremy's legacy looks set to continue with his son Success Days. A multiple Group winner, including the Group 2 York Stakes, the nine-year-old retired to Kilbarry Lodge Stud in 2019 and will stand this year for €2,000.

Appreciate It, a €60,000 purchase from Tattersalls Ireland Derby Sale in 2017, was maintaining his unbeaten record over hurdles in the opening festival contest. Out of the Saint Des Saints mare Sainte Baronne, he was bred by Barmakin Ltd & South Lodge Stud and was sold for €18,500 to Apple Tree Farm at the Tattersalls Ireland November Sale as a foal.

Black Tears, who had broken her Graded duck in the Quevega Mares Hurdle at Punchestown earlier this month, was a €36,000 graduate from the Derby Sale when selling to Bobby O'Ryan from Kilmoney Cottage Stud in 2017.