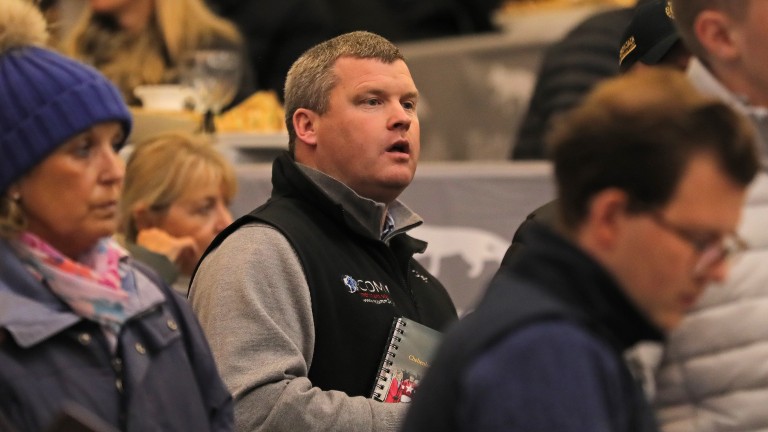 The Prestbury Park stands may have remained eerily quiet after the cancellation of racing on Friday, but there was no shortage of activity from the buying bench at the Tattersalls Cheltenham November Sale as six-figure bids came thick and fast, headed by a £330,000 showstopper from Gordon Elliott.

It was standing room only as prospective purchasers and interested onlookers filled up the Tattersalls sales pavilion as Ballyadam, an impressive winner of a Portrush maiden for Colin McKeever last month, took to the stage.

A prolonged tussle ensued after an opening bid £100,000, and trainer Elliott had to see off the determined challenge of bloodstock agent Alex Elliott, who stood with Henry de Bromhead among the crowd by the main entrance, to land the session-topper.

"He's a nice horse with a good rating and he came very highly recommended," said the trainer. "These are the kinds of horses we need going forward and I'm looking forward to getting him home and seeing where we go with him as he looked very impressive when winning his point. He's been bought for an existing owner with the yard."

Ballyadam is a four-year-old son of Fame And Glory out of the unraced Bob Back mare Grass Tips, making the youngster a half-brother to winning chaser Legal Eyes and a relation to the likes of Glory And Fortune, Commercial Artist and Mass Appeal.

He scored by four lengths on his debut, though McKeever said he feels that performance revealed only the merest glimpse of what Ballyadam is capable of. "He's a lovely horse and he's always gone well," he said. "I think he'll be a superstar some day.

"You like to see them go on and win, regardless of how much they sell for, so I hope he's lucky. He was very good at Portrush. He was very professional, even though it was his first run. He jumped the last like it was the first."

Tattersalls Cheltenham: a big result in the ring as Ballyadam, a winning four-year-old son of Fame And Glory, is knocked down to Gordon Elliott for £330,000 pic.twitter.com/TmF7M2jZIc

Elliott's name also appeared on the docket of the second-top lot, as the trainer signed in conjunction with Aidan 'Mouse' O'Ryan at £255,000 for Fiston Des Issards, a four-year-old son of Buck's Boum who ran out an impressive winner at Loughanmore for Colin Bowe

"I got him from a very lucky owner in Walter Connors," Bowe said of the £28,000 Goffs UK Spring Sale buy. "He's sold horses like Envoi Allen, Espoir D'Allen and Bacardys. He's had numerous Grade 1 horses through his hands and recommended I buy this horse.

"He showed us loads earlier in the year and was ready to run in the spring but met with a small setback. We've always liked him though, he's a very nice horse. He was green throughout his race but when Barry [O'Neill] switched him out he got more professional and galloped right through the line."

Fiston Des Issards is out of Saboum, meaning he shares his damsire, Robin Des Champs, with the likes of Bacardys, Destrier and Benie Des Dieux.

Boothill, who finished a three and a half-length runner-up to Fiston Des Issards at Loughanmore, also changed hands during the November Sale, as Kevin Ross secured the son of Presenting with a bid of £125,000.

Alex Elliott may have missed out on the session-topper, but enjoyed better fortune when securing Yousayitbest at £220,000. The four-year-old son of Doyen had run out a taking winner at Moig South earlier in the month for up-and-coming trainer Cian Hughes, for whom this was another big result, following on from the £295,000 sale of the promising Chantry House last December.

"Obviously I have a bit of a connection with Cian Hughes as my dad sold Chantry House through him last year," said Elliott. "He's been on about this horse for a while and his performance at Moig South backed up everything Cian had told me. He jumped, travelled and ate up the bad ground. He's by a sire I rate very highly and I think the form will work out. 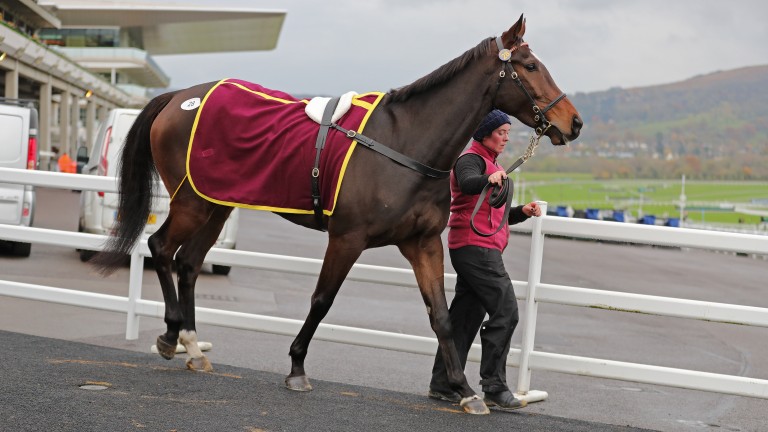 Yousayitbest exits the Cheltenham sales ring after fetching £220,000 from Alex Elliott
Debbie Burt
"I have a lot of faith in the horse. Cian is a straight shooter, he always said my old man's horse was very good and he looks like he could be, and he was very positive about this horse too. He'll go back to Ireland, though I'm not sure who'll train him just yet."

Yousayitbest, who shares his page with the likes of Robinsfirth and Defy Logic, was making his third appearance at public auction, having fetched €17,000 from Fethard Bloodstock as a foal before he was pinhooked by Hughes at €25,000 at the Tattersalls Ireland Derby Sale.

One more for Rathmore

Rathmore Stud's Peter Molony got among the action when he secured Brave Way from Warren Ewing's Bernice Stables with a bid of £160,000.

The half-sister to Coillte Lass provided her vendor with a tidy pinhooking profit, as Ewing paid just £10,000 for the daughter of Jeremy at last year's Goffs UK Spring Store Sales.

"I saw plenty of growth in her and she was always an athletic filly, she just needed to develop. I'm delighted with her price," said Ewing, who saddled Brave Way to make a winning debut at Knockinroe late in October.

Molony said no firm plans had been put in place for his purchase, but indicated that she would return to Ireland to continue her racing career.

"I love the sire, you can't get better than Jeremy fillies at the moment," he said. "She won her point-to-point very well and came highly recommended by Warren. She's been bought for an existing client and will come back to Ireland now. We'll decide on a trainer later."

Gabynako, who finished runner-up to the £220,000 Yousayitbest, also came under the hammer during the session and was knocked down to trainer Gavin Cromwell at £130,000.

The four-year-old son of Tirwanako, who was trained by Shane Ryder and offered by Lakefield Farm, vindicated his vendor's decision to retain him at just €13,000 when offered at the Goffs Land Rover Sale last year.

"This is the fourth horse I've had with Shane," explained Lakefield's John Bleahen. "The others were No Hassle Hoff, Mister Miyagi and Ardlethen, three-high class horses, and coming here Shane thought this horse was the best of them."

Bleahen is better known for his exploits selling unbroken stores, but explained how he came to offer the strapping youngster at Cheltenham.

"This is my first time here in yonks, selling stores is more my game," he said. "But this whole thing has been a pleasure. I valued him higher than the buyers at the store sales and, although I didn't realise he was going to be so good, I was happy to keep him.

"He was actually ridden by my son, Luke, who was only having his second ride in a point-to-point. He's a big tall lad but I was so proud to see him competing against jockeys like Jamie Codd [rider of Yousayitbest]."

Gabynako is the fifth foal out his dam, Gunboatfrance, a Gunboat Diplomacy half-sister to Welsh National hero Halcon Genelardais.

Gordon Elliott's spending spree contributed to turnover of £2,982,000, which was down four per cent year-on-year.

The top of the market proved notably strong, though selling below that level didn't prove so straightforward, as evidenced by the clearance rate, which stood at 71 per cent after 32 of 45 offered lots found a buyer.

At the close of trade, Matt Prior, the recently appointed head of Cheltenham sales, said: "Today provided challenges for Cheltenham racecourse, but due to the versatility of this great venue, we were able to react quickly and bring forward the sale.

"As a result, we welcomed a huge crowd to the Tattersalls sales ring, which resulted in buoyant trade producing increases in the median and average.

"We're also delighted to be able to announce the new Tattersalls January Sale which provides us with the unique opportunity of offering a select number of lots among the atmosphere of the Owners and Trainers marquee.

"We now look forward to the Tattersalls Cheltenham December Sale which takes place on Friday, December 13."

FIRST PUBLISHED 5:55PM, NOV 15 2019
These are the kind of horses we need going forward and I'm looking forward to getting him home and seeing where we go with him