Golden Horn's half-sister gets off the mark at Lingfield

She finished second at Chelmsford in November to Annie Fior 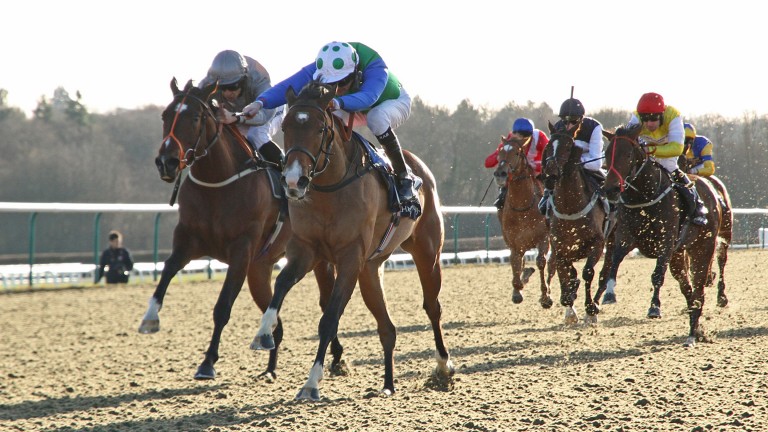 Cercle D'Or (spotted cap): got off the mark in the first division of the maiden fillies' stakes at Lingfield
Ian Headington
1 of 1
By Ollie O'Donoghue 5:15PM, DEC 14 2016

Golden Horn's half-sister Cercle D'Or made all to win the first division of the 7f maiden fillies' stakes at Lingfield on Wednesday.

Bred by the Fleche D'Or partnership and raced in the colours of Sangster, Lascelles and McCalmont Cercle D'Or is by Acclamation out of the unraced Fleche D'Or, a half-sister to Coronation Stakes winner Rebecca Sharp and Group 3 winner Mystic Knight.

The John Gosden-trained Cercle D'Or was ridden a furlong out and kept on strongly to finish three quarters of a length clear of Harbour Grey, and a further three and a quarter lengths clear of Parisian Chic

Cercle D'Or was having her third start as a two-year-old, having finished second at Chelmsford in November.

Golden Horn was exceptional as a three-year-old, winning the Derby, Coral-Eclipse and Prix de l'Arc de Triomphe. The son of Cape Cross is now standing at Dalham Hall Stud at a fee of £60,000.

Golden Horn is not her only relative to excel on the racecourse as she is a half-sister to the Champs Elysees mare Eastern Belle, who won a Listed fillies' race at Newbury over 1m2f as well as finishing runner-up in two Grade 3 races at Saratoga.

Her other half-sister is Golden Reign, a three-year-old daughter of Champs Elysees, who has placed five times in seven starts during her career.

FIRST PUBLISHED 5:14PM, DEC 14 2016
The John Gosden-trained Cercle D'Or was ridden a furlong out and kept on strongly to finish three quarters of a length clear of Harbour Grey