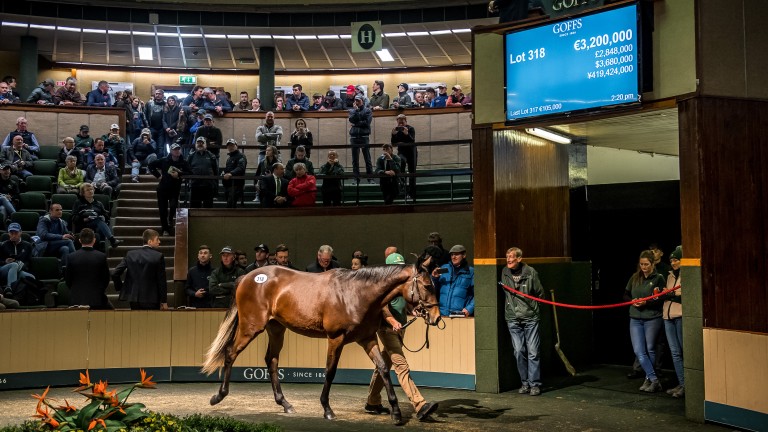 The Galileo filly out of Green Room, sold for a sale-topping seven-figure sum
Sarah Farnsworth
1 of 1
UPDATED 8:06PM, OCT 3 2018

The sister to Oaks heroine Forever Together was billed as the box office attraction at the Goffs Orby Sale, and the daughter of Galileo proved more than deserving of the hype when, on Wednesday, Phoenix Thoroughbreds outmuscled Coolmore's MV Magnier at €3.2 million to add the regally-bred yearling to the operation's growing global string.

After an opening shout of €200,000, Amanda Skiffington and Magnier traded six-figure bids until the Phoenix team of Amer Abdulaziz, Dermot Farrington and Tom Ludt joined in shortly after the seven-figure barrier had been broken.

Magnier, stood with Paul Shanahan against the back wall to the right of the rostrum, slow rolled his bids thereafter, delivering €50,000 increases with a subtle nod of the head.

But each volley was almost instantly batted back by Ludt, leaning against the pillar on the other side of the ring, until the bid board showed €2.7m and auctioneer Henry Beeby turned to Magnier and said: "I can make a suggestion if it helps."

The Coolmore man obliged and signalled €3m, a move that drew audible intakes of breath from the transfixed onlookers. But, just as they did when they secured the sister to Alice Springs for €2m less than 24 hours earlier, the Phoenix team fought on until, at €3.2m, Magnier threw in the towel. 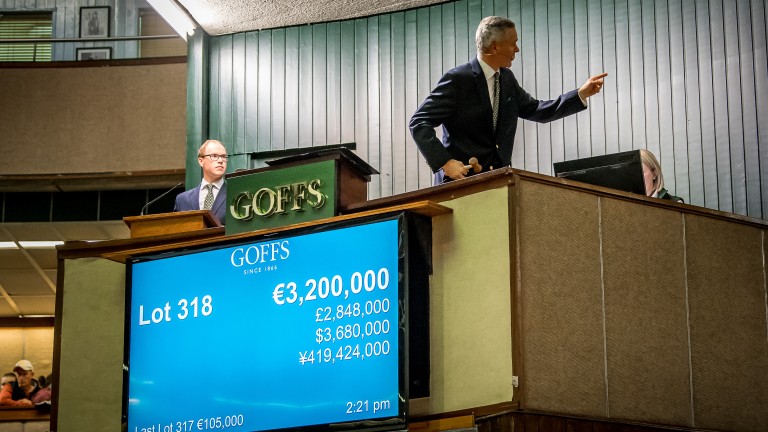 Henry Beeby on the rostrum as the bidding comes to a close at ?3.2 million
Sarah Farnsworth

The filly became the highest-priced yearling sold anywhere in the world this year and the most expensive yearling filly ever sold at Goffs. However, her price fell short of the Ir£3.1m commanded by the Shergar colt Authaal in 1984.

Farrington said: "The mare has done it; her first foal was Lord Shanakill, she's had the two Galileos [Together Forever and Forever Together] too, so for the mare to be producing three horses of that calibre she must be very special. I'd have loved to get her a bit cheaper but it just doesn't happen."

The transaction took Phoenix's Orby Sale spend to €5.99m for six lots across the two-day auction, with €5.2m of that total accounted for by the two Galileo fillies - with Wednesday's purchase set to be trained by Karl Burke.

"Phoenix are bedding in families for the future," said Farrington. "This filly comes from a Juddmonte family and normally you can't get hold of those. Many years ago Green Room was sold at Tattersalls – it was actually me that bought her back then – and now she's produced three Group 1 winners.

"Phoenix are very keen to bed in those big families with these two fillies - those families will be around for a long time."

Despite her siblings' illustrious record at the Orby Sale, John O'Connor - managing director of Ballylinch Stud, who offered the filly on behalf of breeders Vimal And Gillian Khosla - said he had not felt under pressure prior to the auction.

"When they're the complete package like she is, I'm actually more relaxed about it," he said. "She's by an outstanding stallion and out of an outstanding mare, which is very hard to find. And on top of that she's a very good physical, a superb walker who vetted perfectly, so I was reasonably confident that she would sell well.

"We've sold several fillies out of this mare before and everything has gone on to show real talent. Obviously there were the two Galileo fillies but Signe also did well to come back and win three races after injury. We've raised them all and so we know the family very well."

Green Room, a daughter of Theatrical bought for $240,000 by Templeton Railton Farms at Keeneland in 2006, has a filly foal by Galileo and is in foal to Sea The Stars.

It is little wonder Magnier proved such a determined underbidder, as it was in Coolmore's colours that Forever Together landed this year's Oaks, while her sister Together Forever also brought Coolmore Group 1 glory when winning the 2014 Fillies' Mile.

FIRST PUBLISHED 6:51PM, OCT 3 2018
Phoenix are very keen to bed in those big families with these two fillies - those families will be around for along time