The colt had been pinhooked by Peter O'Callaghan for $400,000 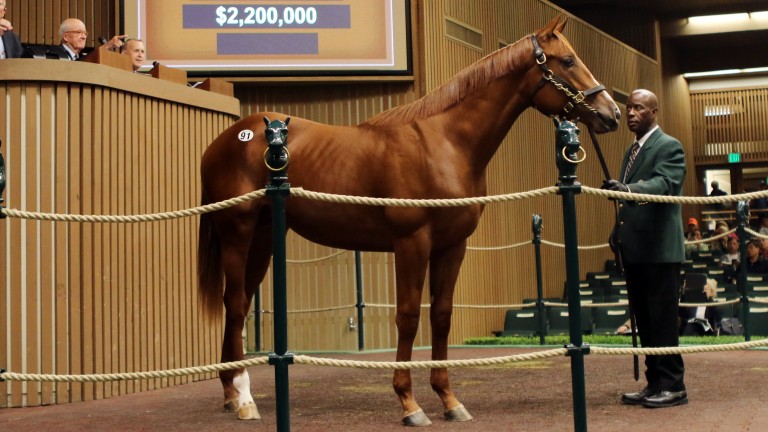 Sheikh Mohammed's Godolphin operation continued their buying spree at the Keeneland September Yearling Sale on Monday when they went to $2.2 million to purchase a colt from the first crop of Triple Crown winner American Pharoah.

The colt, consigned as Hip 91 by Peter O'Callaghan's Woods Edge Farm, is the second foal out of the multiple stakes-winning Indian Charlie mare Kindle.

Bred in Kentucky by HnR Nothhaft Horseracing, the colt had been purchased by O'Callaghan's Cavalier Bloodstock for $400,000 as a weanling at last year's Keeneland November Breeding Stock Sale.

Jimmy Bell, president of Sheikh Mohammed's Darley operation at Jonabell Farm in Lexington, said Sheikh Mohammed was taken with the colt when he saw him for the first time earlier on Monday. 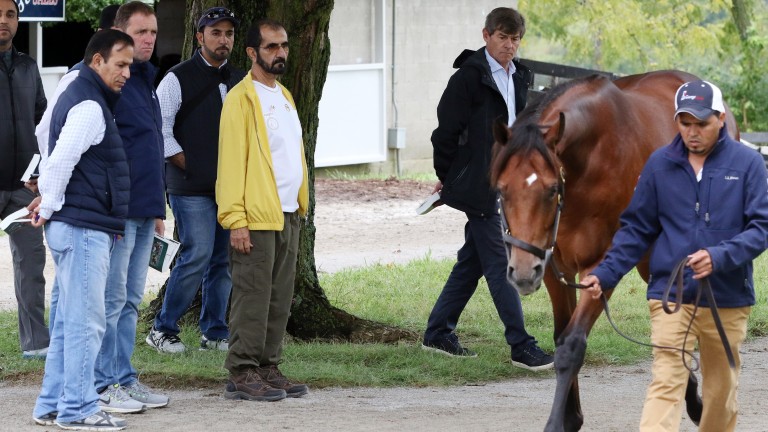 Sheikh Mohammed (yellow) and his team, including Simon Crisford (second right) and Charlie Appleby (third left), during inspections at the Keeneland September Sale
Keeneland Photo
"Sheikh Mohammed saw him at the barn and loved him very, very much," Bell said. "In the walking ring, he was all class and had a lot of presence about him. He really liked him from the first time he set his eyes on him."

O'Callaghan said having prominent buyers like Godolphin battling with representatives of Coolmore is what consignors strive for.

"The sheikh, I knew when he saw him today, his eyes just lit up, and I just had a feeling he was going to try hard to buy him," said O'Callaghan.

"Who knew it was going to be that level, but it took a monumental effort to outbid Coolmore. It's the perfect scenario for any of us. That's what we all dream of, two of the great racing powers getting stuck on your horse and going at it. We're just lucky it happened to us today."

Meredith Daugherty contributed to this story.

WATCH → Hip 91, colt from the first crop of American Pharoah sold to Godolphin for $2.2 million at #KeeSept@godolphin @woodsedgefarmky pic.twitter.com/hFJJDAr1Cx