Godolphin filly with Coolmore engine revved up to race 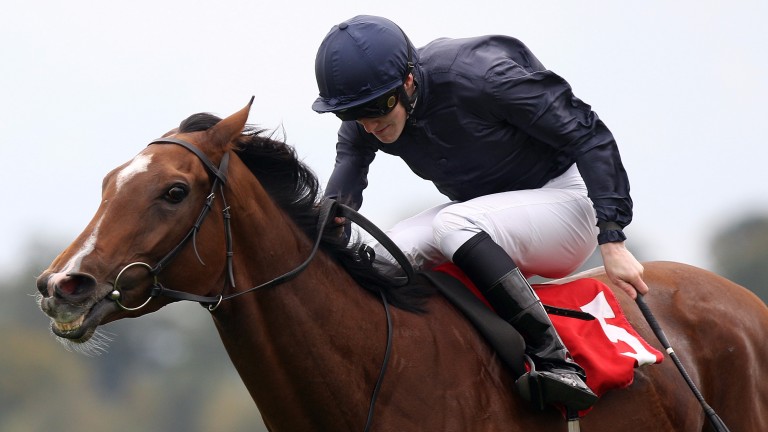 One of the big talking points of the yearling sales has been the rapprochement between Coolmore and Godolphin. With that in mind, the favourite for the 7f juvenile fillies' novice stakes at Chelmsford on Thursday (6.45) has an interesting background.

For while the Charlie Appleby-trained Flora Sandes will make her debut in the royal blue silks of Godolphin, her page is tinged with Coolmore navy.

Bred by Whisper Hill Farm, Flora Sandes is by War Front and the first foal out of Galileo mare Aloof, meaning she is bred on the same cross as Group 1-winning siblings Roly Poly and US Navy Flag.

Aloof was a Group 3 winner for ex-trainer David Wachman and is a half-sister to Meow, winner of a 5f Listed contest at two and the dam of Churchill and Clemmie, winner of last month's Cheveley Park Stakes.

In winning the Group 1 contest, Clemmie emulated her granddam, the 2002 winner Airwave, a half-sister to shock Nunthorpe winner Jwala.

Following her racing career, Aloof lit up the board at the 2014 Keeneland November Breeding-Stock Sale, fetching an eye-watering $3.9 million from Whisper Hill Farm, and her first two foals, both by War Front, have been offered at the Keeneland September Sale.

Flora Sandes was the second most expensive filly sold during the opening session at last year's sale, when former Godolphin chief executive John Ferguson signed a $900,000 docket for her.

OXO Equine had to go to $1.6m to secure her year-younger sister, the second most expensive filly at this year's renewal of Keeneland's flagship yearling sale.

Flora Sandes may not have it all her own way, however, as another debutante for Godolphin, the Saeed Bin Suroor-trained Spring Waterfall, may yet steal the limelight.

A Godolphin homebred, the Exceed And Excel filly is out of the Woodman mare Forest Pearl, making her a half-sister to five-time Group 1 winner Miss Finland. The latter's versatility is evidenced by the fact those elite wins came over trips of 6f - in the 2006 Golden Slipper - to 1m4½f. Forest Pearl's dam, meanwhile, is the 1995 Oaks winner Moonshell.