Globetrotting Flintshire to stand at Hill 'n' Dale in 2017 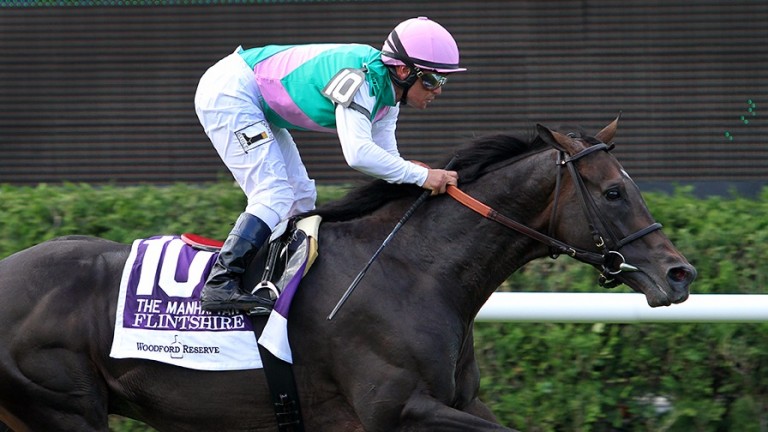 The six-year-old son of Dansili will be retired after his tilt at the Grade 1 Breeders' Cup Turf at Santa Anita on Saturday.

A Juddmonte homebred out of the Group 2-winning Sadler's Wells mare Dance Routine, Flintshire is a brother to the Listed scorer Dance Moves and a half-brother to the winner Deliberate.

Under the care of both Andre Fabre and Chad Brown, he has won eight races from 23 starts including the Group 1 Prix de Paris, the Group 1 Hong Kong Vase, two editions of the Grade 1 Sword Dancer Stakes, and the Grade 1 Manhattan Stakes.

John Sikura of Hill ‘n' Dale said: "This is an exciting group that has come together to support and stand behind an incredible international star who brought his best race to every corner of the globe and distinguished himself truly as a horse of the world.

"The fact that Juddmonte is staying in and have committed mares to him says a lot about their belief in the horse to become a great sire. I believe Kentucky needs to become more global again in attracting international stallion prospects. Look at the success of War Front and Kitten's Joy. We should be embracing these kinds of opportunities in order to be relevant to all marketplaces.

"I've been waiting for the right horse to stand that fits this mold. I believe Flintshire is the one. He is the product and epitome of arguably the best breeding programme in the world, Juddmonte. Hill ‘n' Dale will support him with a great book of mares.

"We're managing a horse like this and crafting his career, not just selling seasons. Our partners are like minded which gives us a great internal foundation of mares to support the horse."

Tom Ryan of SF Bloodstock added: "Flintshire is the ultimate racehorse with a brilliant turn of foot and huge pedigree. The fact that he's the all-time leading money earner ever produced by the internationally acclaimed Juddmonte Farm is quite a testament to his exceptional talent and quality.

"We will buy specific mares for him and support him heavily. We believe in the horse."

The China Horse Club's Michael Wallace said: "This is a truly international racehorse of the highest order and exactly the type of horse the China Horse Club is looking to become involved with, great-looking, deep pedigree with immense talent.

"We will do our part to give Flintshire a great chance to succeed. He is a uniquely accomplished horse that has all the ingredients to become a top sire."

Garrett O'Rourke, general manager at Juddmonte in Kentucky added: "Flintshire epitomises what we try to produce at Juddmonte. He is by our most accomplished stallion, from one of our best families. He has a regal temperament and a will to win that shows in his scintillating turn of foot. We're very proud of him."

A fee for Flintshire will be announced at a later date.