Dual Group 1 winner bought by a syndicate headed by Coolmore 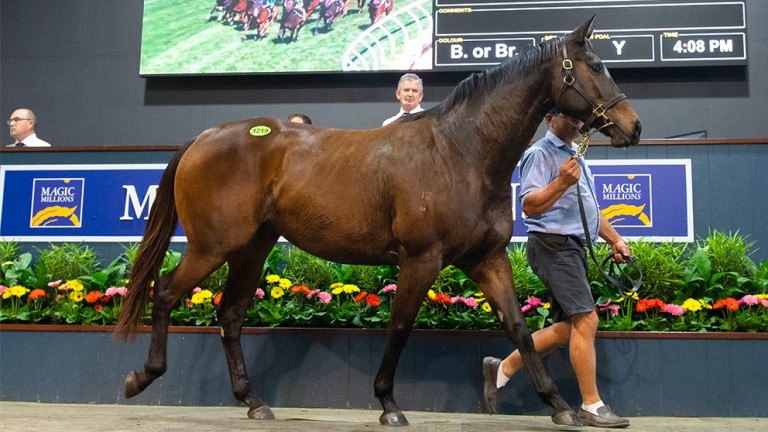 Global Glamour topped day two of the Magic Millions Gold Coast National Broodmare Sale on Wednesday when selling to a syndicate headed by Coolmore's Tom Magnier for A$1.55 million (£848,265/€961,680).

The filly was the highest-priced acquisition made by the syndicate in a spectacular A$10m spending spree to support unbeaten US Triple Crown champion Justify at stud in Australia this year.

Global Glamour was the sole seven-figure lot sold on day two of the sale after five mares reached A$1m or more, headed by the A$2.3m mare Missrock, during the race fillies and mares session held on Tuesday.

Magnier signed for the Flight Stakes and Thousand Guineas winner stood alongside members of the Coolmore partners and agent James Bester, the man responsible for selecting Global Glamour as a yearling, after the bidding opened at an even A$1m.

Bester purchased the daughter of Star Witness, who was offered in foal to Zoustar, for A$65,000 at the 2015 Magic Millions Gold Coast Yearling Sale for the It’s All About The Girls syndicate, which is made up of 40 women from seven countries.

Global Glamour won five races and A$1,561,400 in prize-money, with Wednesday’s windfall the last chapter for the It's All About The Girls syndicate.

Bester said: "I hope they are (satisfied). I would have hated there to have been an anti-climax. She's the best mare to go through the ring in terms of performance and, in my view, in terms of physique, and that's exactly the type of mare Justify deserves.

"I cannot even imagine what she could produce by him. She's in foal to Zoustar, which is a wonderful start anyway, and to follow that up with a Justify will be wonderful."

Gerry Harvey, who owns Magic Millions and has an extensive bloodstock portfolio, has also joined the Coolmore-led partnership who secured Global Glamour, and admitted some late-night negotiations led to his association with elite winner.

He also revealed they were prepared to keep bidding in order to buy the former Gai Waterhouse and Adrian Bott-trained mare.

"He took me out and got me pissed last night. It was a very late night and at the end of it I said, 'OK Tom, I give in!',"said Harvey.

Magnier added: "She has a lot quality and is obviously a great race filly and we are delighted to be involved with Gerry. To be fair to Magic Millions, they did a great job in getting all the right people to the Gold Coast and all the best judges were on her. We were happy to get her and we will send her to Justify - that's where Gerry wants to go."

Global Glamour was bred by Victorian-based James O'Brien of Lauriston Thoroughbred Farm, who retains a yearling sister to the dual Group 1 winner.

"There's no possible way that I thought she would make that mark when she was born," O’Brien said. "Just seeing her racing career evolve, we've just been so proud to see that result. She's the best filly that we've produced. She did an amazing job on the racetrack."

Global Glamour is the first winner out of the twice juvenile-winning mare Spectacula. Widden Stud, the home of her sire Star Witness, was entrusted with selling Global Glamour.

"What an unbelievable result - Global Glamour is almost a story in herself. She summed up this whole Magic Millions Women’s Syndicate concept and to see her do what she did and the enjoyment she gave those wonderful group of owners,” Widden Stud’s Ryan McEvoy said.

"To see her come back here and go full circle, it's really what it's all about. She went through unreserved and there was a lot of hype around and understandably so - not only is her race record great, but she is also a wonderful type, she's just flawless. She was the real talk horse of the sale and you just have to smile at the whole story."

"Physically, she is perfectly suited to Zoustar - she was retired rather late so it wasn't always preconceived, but when James called us late in the piece and he had a booking to Zoustar, it was nice to be able to write Global Glamour's name next to his booking."

Subscribe to make sure you never miss updates from Australia, New Zealand and beyond and to have ANZ Bloodstock News delivered to your inbox every day.

FIRST PUBLISHED 1:01PM, MAY 29 2019
She's the best mare to go through the ring in terms of performance and in terms of physique, and that's exactly the type of mare Justify deserves