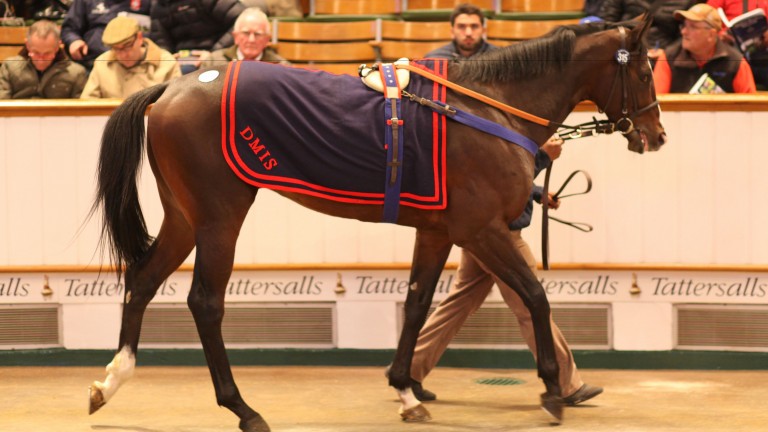 Promising juvenile Sincil Bank and classy three-year-old Imperial Aviator were the star acts of a solid opening session of the Tattersalls Autumn Horses in Training Sale in Newmarket on Monday that was fuelled by strong international demand.

Buyers from North America, Hong Kong, Australasia and the Middle East were among those to make their presence felt during a day in which four of the top five lots were sold to continue their careers abroad.

They included day's joint session-toppers in Sincil Bank and Imperial Aviator, both of whom realised 270,000gns.

Sincil Bank will race for Hong Kong-based interests after selling to Alastair Donald of SackvilleDonald while Imperial Aviator is set to continue his career in Australia under the care of Gai Waterhouse and Adrian Bott.

Sincil Bank has finished first past the post in two of his three starts for David Simcock and chased home the exciting Dreamfield in a conditions race at Newmarket.

"He's for an owner in Hong Kong," said Donald after outbidding Stephen Hillen. "He's a nice, scopey horse who still has a bit of maturing to do. But he's a good physical and is effective at the right trip and on the right ground for Hong Kong. I know David [Simcock] held him in high regard."

Sincil Bank almost made a successful start to his career when passing the post first on his debut at Newcastle, only to be disqualified and demoted to second.

Simcock elected to send him back to the same track for a maiden a month later and was rewarded when the colt scored by three-and-a-half lengths. The son of Hat Trick again ran with credit on his most recent outing when third at Newmarket.

"It was an eye catching run at Newmarket last time," said Donald. "The horses that beat him [Dreamfield and Top Score] look smart and I think he just got tired coming up the hill."

Australian buyers clashed on Imperial Aviator, who emerged as an exciting three-year-old for Roger Charlton back in the spring when defeating Ulysses in a maiden at Leicester en route to taking a competitive handicap at Newbury.

Subsequently down the field in the Prix du Jockey Club and Great Voltigeur Stakes, he's fared well back in handicap company in recent months, notably when fourth to What About Carlo at Newbury on Saturday.

Australian trainer Chris Waller tried hard to secure Imperial Aviator via his representative Guy Mulcaster while Charlton did his best to ensure the colt's return to Beckhampton. However, they had no answer to agent Johnny McKeever, who was taking instructions from Adrian Bott.

"He's a gorgeous horse," said McKeever, "the standout of the day and we couldn't leave him behind. He's an attractive stayer. You wouldn't know he'd run two days ago.

"This sale has been a happy hunting ground for us - we bought [Group 1 winners] Glencadam Gold and The Offer here. Let's hope it continues!"

Jamie Railton sold Imperial Aviator on behalf of a partnership that included Qatar Racing, who bought into the colt in May.

Also destined to continue his career abroad is recent Carlingford Stakes winner Hawke, who has next year's King's Cup in Saudi Arabia on his agenda after realising 260,000gns to representatives of Prince Sultan bin Mohammed.
The Oratorio gelding has hit a good run of form for Johnny Murtagh of late, since his recent performances also include a close third to Long Island Sound in the Diamond Stakes at Dundalk.

"Hopefully he can run in the King's Cup," said a representative of Prince Sultan bin Mohammed's team. "He's shown he acts well on the all-weather, which will suit our racing."

Another horse in good form, the Jeremy Noseda-trained Listed Prix du Ranelagh winner Bravo Zolo, was snapped up by Anthony Stroud for 170,000gns as a potential prospect for the Dubai World Cup Carnival.

"He's got the right profile for Dubai - the right rating and he's sound," said Stroud. "I'm not sure who will train him yet but there should be plenty of opportunities for him there."

The European stallion ranks gained a new recruit for the future when Luke Comer outbid John McCormack and Aidan O'Ryan at 150,000gns for one of the most accomplished horses catalogued, 2014 Phoenix Stakes winner Dick Whittington.

Immediate plans for the colt, who won the Ballycorus Stakes for Aidan O'Brien in June, are unclear but the ultimate aim is to stand him under the Comer Stallions banner at Palmerstown Stud

"It's 50 - 50 whether he'll race again," said Comer, "but he'll eventually stand at Palmerston Stud. Obviously he's a Group 1 winner and is bred on a nice cross."

Comer, who won the 2001 Curragh Cup with another former Ballydoyle inmate in Chimes At Midnight, has a band of around 150 mares with which to support his stallions, which also include Melbourne Cup winner Green Moon and Kargali, who was saddled by Comer to win the 2010 Gladness Stakes.

Another lot with significant residual value, Listed-placed Bellajeu, had earlier lit up the ring when sold for 140,000gns to Richard Fitzsimmons of the BBA Ireland.

Sold by Jamie Railton, the daughter of Montjeu won a handicap at Salisbury on her penultimate start for Ralph Beckett and was deemed good enough last year to contest the Oaks following a runner-up effort in the Lingfield Oaks Trial.

"She's for a new client to stay in Europe but I'm not sure where she'll go," said Fitzsimmons of the filly, who is out of Listed winner Arbella. "She's a stakes-placed Montjeu filly, so a bit of a collectors item."

Californian-based buyers were also active, in particular Red Baron's Barn and Rancho Tellescal, who went to 130,000gns for two-year-old Souter, a recent winner at Ayr for Keith Dalgleish. The partnership has enjoyed great success with various European imports, among them Charles Whittingham Stakes winner Si Sage, and owner Tim Cohen is looking forward to getting their newest recruit back to California.

"He'll ship straight away," said Cohen of the Poet's Voice colt, "but I'm not sure yet who will train him.

"He's a nice horse who has his conditions to race in the US. It's also nice he's a two-year-old - it's always good to have a horse with a future."