Nicky Henderson also the beneficiary of a big seller 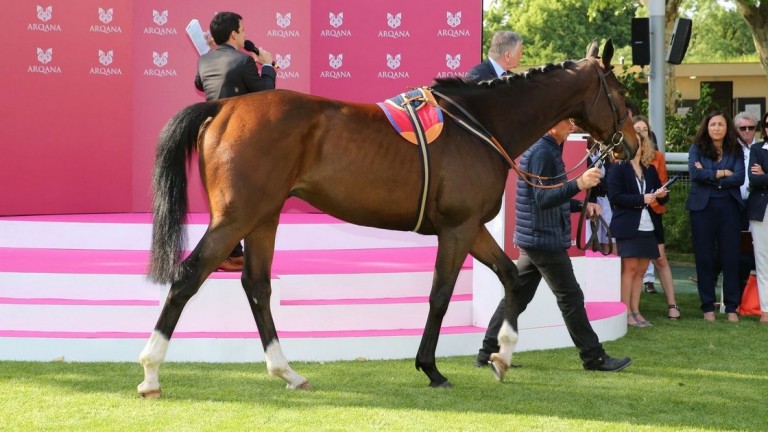 Vision D'Honneur goes under the hammer after racing at Auteuil
Arqana
1 of 1
By Scott Burton UPDATED 9:05AM, MAY 20 2018

Two of the three highest-priced lots to change hands at the inaugural Grand Steeple-Chase de Paris Sale held by Arqana at Auteuil on Saturday will carry the maroon silks of Gigginstown House Stud in the future, with both heading to Gordon Elliott.

At €350,000 the Gigginstown team came out on top after a spirited three-way battle for the four-year-old Vision D'Honneur, winner of his only start over hurdles at Fontainebleau for trainer Robert Collet.

Vision D'Honneur's sire, the late Vision D'Etat, is due to be represented by the classy De Bon Coeur in Sunday's Grande Course de Haies, while he is a half-brother to Le Martalin, who won a Killarney beginners' chase by six lengths for Noel Meade and Gigginstown last Sunday.

"This horse won very well and when I saw him this morning I loved him," said Elliott. "We hope he'll be a good horse and he certainly looks the part." 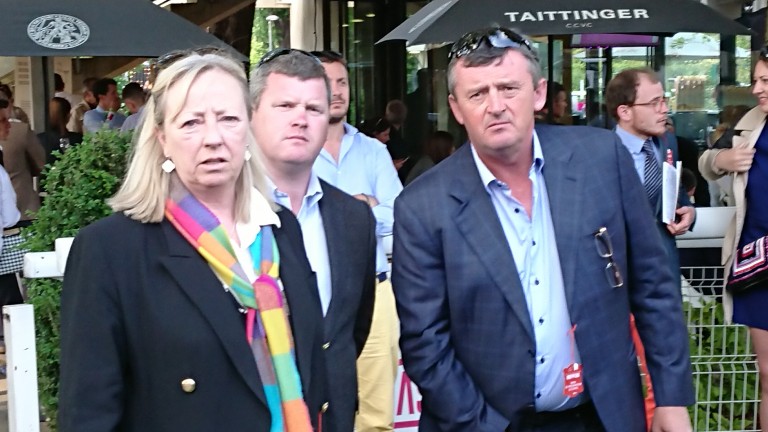 Mags O'Toole's was the name on the ticket once again when the same combination struck at €170,000 for Elwood, who recently opened his account over hurdles for trainer Emmanuel Clayeux at Moulins.

Once again, Gigginstown were going down a tried and tested route for the son of Martaline having also bought Delta Work, his half-brother by Network and winner of the Pertemps Final at Cheltenham for Elliott and, most recently, runner-up in the Grade 1 Irish Daily Mirror Novice Hurdle at Punchestown.

"Delta Work is a good horse and, although this one is a little bit backward in comparison, he won well last time," said O'Toole. "We all went down to Emmanuel Clayeux's place on Friday morning and this horse looks good. He fetched around what we expected."

The visiting buyers wasted little time in making their presence felt and it was Highflyer Bloodstock who came out on top at €180,000 for Caribean Boy, who finished runner-up in a Listed race over hurdles here last month for trainer Francois Cottin.

A son of Myboycharlie, Caribean Boy is out of a Linamix half sister to a three-time black-type producer for the Aga Khan, and counts Candarliya and Canndera in her immediate family.

Anthony Bromley stood with Nicky Henderson and confirmed that Seven Barrows was the likely destination of Caribean Boy.

"He's for a client in England and I think he'll find his way to Nicky Henderson," said Bromley. "He's a lovely, big chasing horse, with a good size about him.

"His form has been franked because he was second here to Lou Bucks, who I thought ran very well today [when fourth] in the Grade 1 [Prix Alain du Breil]. He's not a novice hurdler but he has the physique to be a novice chaser in England."

Eight of the 16 lots failed to make sufficient money for their owners to part with them but that was an understandable situation for a select sale such as this in its first year.

Among those not to reach their reserve, it will be worth keeping an eye on En Avant Bayonne, a four-year-old son of Coastal Path from the family of Tout Rouge who has already twice been runner-up over hurdles at Auteuil and who was bought back by Nicolas de Lageneste for €210,000.

FIRST PUBLISHED 7:53PM, MAY 19 2018
His form has been franked because he was second here to Lou Bucks, who I thought ran very well today in the Grade 1