Gross and average only exceeded once in sale's history 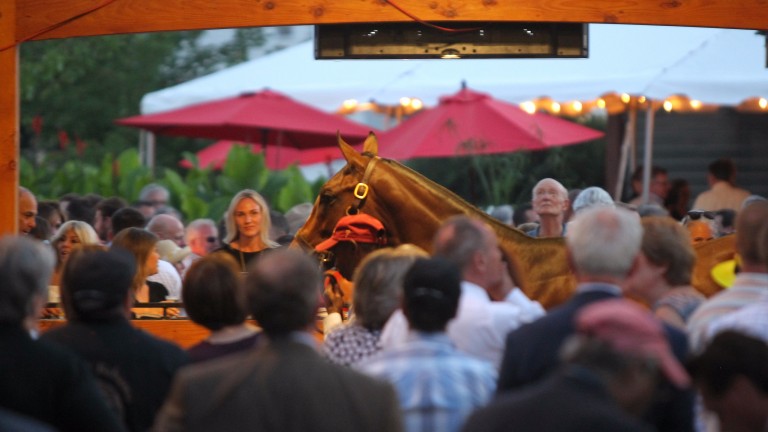 The scene during a buzzing second session at Saratoga
Fasig-Tipton Photos
1 of 1
By Ron Mitchell of Blood-Horse 11:10AM, AUG 9 2017

They nearly blew the roof off the Humphrey S. Finney sales pavilion on Tuesday, as prices soared during the second and final session of the Fasig-Tipton selected yearling auction in Saratoga – pushing the overall sale to levels not seen in years.

Topped by an outstanding son of Orb, sold for $1 million, the session sent the overall gross and average prices to the second-highest in the history of the sale. The $300,000 median was a sale record.

"Obviously we have had a tremendously successful sale," said Fasig-Tipton president Boyd Browning. "We had high expectations coming in - and we exceeded those expectations."

Browning measured the sale's success by the close correlation between average and median prices.

"I've been doing this a long time and I honestly can't recall ever seeing as close a relationship in an upper-end horse sale in the average and median that we've seen over the last two nights," he said. "Remarkable, remarkable depth in the buying pool between $250,000 and $750,000. Just enormous competition. Horses were exceeding reserves by two, three, four times in many instances, and you would see it happening consecutively.

"I think it illustrates a really healthy marketplace. The consignors are very realistic in setting their reserves, and the buyers are willing to be competitive and have a real appetite for quality horses."

Although the action was vibrant throughout, it was not until late in the four-hour session that the elusive seven-figure mark was reached for the second time – following a Curlin colt on the opening night –when agent Kerri Radcliffe went to $1 million to acquire the Orb colt consigned by Gainesway as Hip 186.

The large crowd assembled in the pavilion and its dining areas at the rear of the pavilion applauded the sale of the $1 million yearling, having earlier responded with whoops and applause when a War Front half-sister to Group 1 winners Peeping Fawn and Thewayyouare was hammered down to that figure, but failed to meet her reserve.

Falling just short at $995,000 was the penultimate lot through the ring, Godolphin winning a protracted bidding war for Hip 226, a War Front full brother to Grade 1 winner Avenge.

Though a boutique sale, this sale can serve as a barometer of the marketplace going into the fall auction season, according to consignor Stuart Morris.

"The fact it is so robust this year, and so strong, indicates a very healthy market," Morris said. "Traditionally when this sale is like it is and there are a lot of buyers in all price ranges, it's an indication of a healthy market.

"When you have horses being sold for $100,000 and for $1 million the same night, it's a good horse sale. It looks like both the sellers and buyers have been realistic and a lot of horses are getting sold."