Bloodstock Latest DARLEY DOWN UNDER

Ghaiyyath, Pinatubo and Earthlight to stand at stud in Australia this year 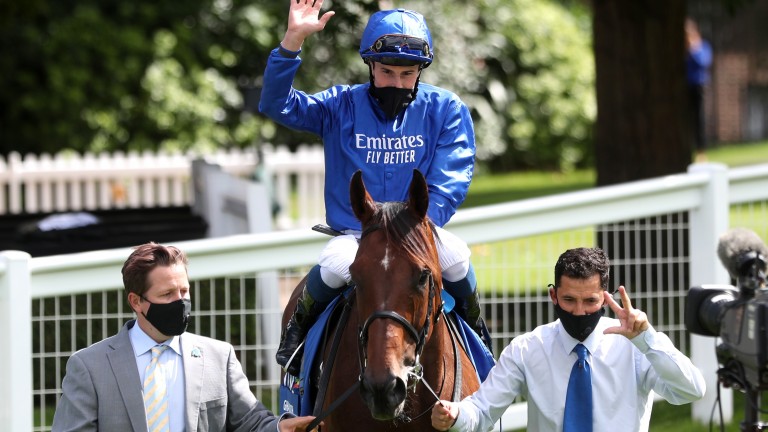 World-class sprinter Bivouac could travel to Royal Ascot in June in a bid to enhance race his record before joining the Darley stallion roster later this year, one of four first-season sires the southern hemisphere arm of Sheikh Mohammed’s operation will launch in 2021.

Darley on Monday confirmed that Bivouac would retire to Kelvinside in the Hunter Valley at the end of his current campaign, while also revealing that European champions Pinatubo, Ghaiyyath and Earthlight would shuttle to Australia in 2021.

The first-season sire quartet have won a combined 12 Group 1 races and have the credentials to make an impact down under, leaving Godolphin Australia managing director Vin Cox to declare that any stud farm “would have any of them in a heartbeat”.

He told ANZ Bloodstock News on Monday: “You have got to be very careful if you are going to market with four horses because the market tends to want to drop one or two off, but these four horses in their own right are legitimately credentialed, highly commercial and attractive prospects for any stud farm.

“When you look at them in isolation, you say, ‘Why wouldn’t you stand this horse?’

“When you’ve got four exciting prospects, then you go to market with four horses.”

The imminent retirement of the James Cummings-trained Bivouac, the 2019 Golden Rose Stakes winner, will bring the curtain down on a successful three-season career and arguably he will become the most sought after first-season stallion of his year.

Cox said: “He is a scintillating horse. Some of his performances have been world class and they get cut-through on the world stage.

“You see him being written up and footage of him winning on all sorts of platforms right around the world, and when you have got a horse doing that, you know he is an exciting prospect.

“He was a very good two-year-old and, ultimately, he became a Group 1 winner at three in the Golden Rose, going on to win the Newmarket. To come back at four and win another Group 1 [the VRC Sprint Classic], he is a horse of high calibre over multiple seasons.”

A dual stakes winner at two, Bivouac was also runner-up to Exceedance in the Coolmore Stud Stakes at Flemington and represented Godolphin in The Everest last year, finishing runner-up to Classique Legend, before triumphing down the Flemington straight on Stakes Day last November.

He ran fourth in the Canterbury Stakes on March 5 after enduring a wide run and Cox revealed the TJ Smith Stakes and a trip overseas remained on the agenda for the four-year-old.

“He’s always been a big horse who has matured and furnished into an exciting stallion prospect and, mentally, he’s been able to cope with the rigours of training and he hasn’t turned a hair,” he said.

“The noise that we are already receiving is very, very strong, which suggests he is going to command a lot of respect in his years in the breeding barn.

“Our plan is to go to the TJ Smith and, subject to what happens there, we'll push forward to Royal Ascot. As far as we're concerned, we’re making plans to go there, but those plans can change.” 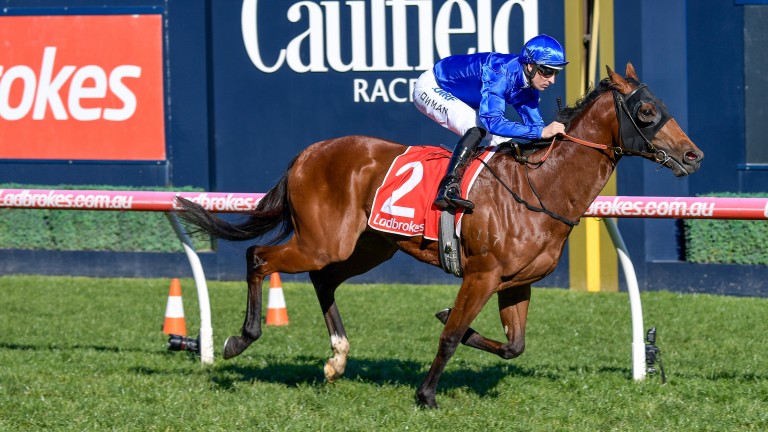 Bivouac: Royal Ascot is still on the table but retirement looms later this year
Racing Photos

Bivouac possesses a potent female family, being out of More Than Ready mare Dazzler, who in turn is a half-sister to champion four-time Group 1-winning filly Guelph.

Bivouac is likely to reverse shuttle to the UK next year as a replacement for his own sire Exceed And Excel.

“He didn’t go back this season and we would love for his legacy to continue, and his best son is the obvious choice to do it.

“He draws in so many influential bloodlines and sire strength in the Australian industry, so he’s got a lot to like about him.”

Pinatubo to make impact down under

Shamardal’s son Pinatubo, whose official two-year-old rating was higher than joint 2010 juvenile champions Frankel and Dream Ahead, will stand alongside Bivouac at Kelvinside, while Ghaiyyath and Earthlight will stand at Northwood Park in Victoria.

Winning all six starts at two, Pinatubo displayed his star qualities when putting nine lengths on his rivals in the National Stakes at the Curragh before returning to Newmarket to round out his juvenile season in the Dewhurst Stakes a month later.

Cox enthused: “He’s the ultimate two-year-old machine from Europe. His win in the National Stakes was dynamic and it’s the exhilarating speed that you want to see, and that saw him become the highest-rating two-year-old and rightly so.

“In the reverse situation to Bivouac, he has cut through locally in the domestic market here in Australia.

“It seems the local market is very aware of his ability and what he did on the racetrack at two.

“Over the generations, horses who can quicken off a fast pace tend to be highly-performed stallions.” 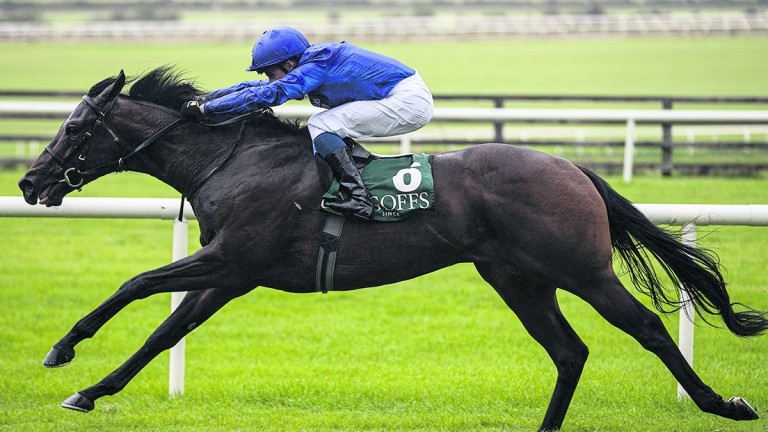 Pinatubo, Europe’s champion two-year-old of 2019 and equal leading three-year-old male in 2020, won seven of his ten starts. His dam Lava Flow was a Listed winner in France, while his second dam was also a stakes winner in Europe, Mount Elbrus.

Cox believes 2020 Horse of the Year Ghaiyyath, a dual Group-winning two-year-old who trained on to win three times at the highest level as a five-year-old, presents breeders with a unique opportunity to breed to arguably the best son of one of the world’s best stallions.

A Group 1 winner at Baden-Baden at four, he came into his own last year when he won four races in succession - the Dubai Millennium Stakes at Meydan, the Coronation Cup at Newmarket, the Eclipse at Sandown when downing Enable, and the International Stakes at York.

“He was an extremely expensive weanling (€1.1 million), so obviously he’s got the looks and he transferred that onto the racecourse,” said Cox.

“So, being a son of one of the hottest stallions in the world and a good-looking horse, it is exciting for the Victorian market and exciting for Darley.”

The best-performing son of Dubawi, Ghaiyyath’s pedigree also offers the blood of one of the world’s great sires, Coolmore’s influential Galileo. A half-brother to US Grade 1 winner and champion European mare Zhukova, as well as the stakes-placed Sleeping Beauty, Ghaiyyath’s is out of Irish 1,000 Guineas winner Nightime, and his second dam, Caumshinaun, was a also a stakes winner in Ireland.

Mare owners wanting to breed a high-class miler should look closely at Ghaiyyath, according to Cox, now in his fourth year at the helm of Godolphin Australia.

“There’s a definite appetite for horses with his credentials,” he said.

“He’s a good looking horse, by a good stallion and he’s got the race performance to attract significant mares and the best breeders.”

Earthlight will join Ghaiyyath at Northwood Park and he will be the second son of Shamardal at the Victorian farm alongside Blue Point, who covered 128 mares in his first shuttle season to Australia last year. 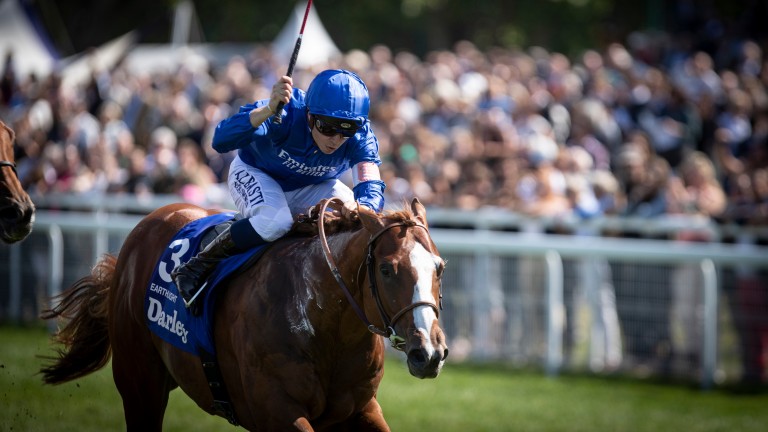 Earthlight: like Pinatubo was a star unbeaten two-year-old by Shamardal
Patrick McCann (racingpost.com/photos)

After an unbeaten five-run juvenile season, Earthlight was retired last year with a record of seven wins from nine starts, including victories in the Prix Morny and the Middle Park Stakes.

Cox said: “He was an undefeated champion two-year-old in France who is by Shamardal and he fits right into the book we have down there in Victoria. We see that he will be quite popular.

“Blue Point and Earthlight will have different price points. We are not going to announce fees at this stage, but ultimately we will, and we don’t see either horse running over the top of each other.”

He is the first foal to race out of the Group 1 winner Winters Moon, a half-sister to Group 1 winners in France, Mandaean and Wavering.

The much-missed Shamardal, who shuttled to Australia in 2005 and 2006 and from 2008 to 2010, is the sire of 152 stakes winners worldwide, 27 of which were down under, the best being Hong Kong champion Able Friend and VRC Oaks and Vinery Stud Stakes winner Faint Perfume.

Cox is confident the Shamardal sire line can continue to make an impact.

“Unfortunately Shamardal didn’t have many seasons here in Australia but he proved to be a stallion of significance and he’s proving similarly or even better in Europe and proving to be a sire of sires,” he said.

“There’s no doubt he’s an influence that we will see for a long time.”

In launching four new stallions, Cox indicated Godolphin would again be supporting Darley’s young stallions with a band of quality mares, as the organisation did with US shuttler Frosted, whose first southern hemisphere crop includes dual Listed-winning, Blue Diamond Stakes runner-up Ingratiating and the stakes-placed fillies Frost Flowers and Cloudy.

He said: “You have to give them that opportunity, give them that start on the racetrack. It has worked very well for us in launching a horse like Frosted.

“He was a horse who didn’t really hit anyone’s radar, but he’s well and truly on their radar these days.

“We’ve got a strong broodmare band and we’ve got good systems in place that allow us to get these horses to the racecourse and, therefore, be able to promote our horses via the racetrack.”

Service fees for the four new Darley stallions and its entire Australian roster, which also includes last year’s big-name first season sires Microphone and shuttler Too Darn Hot, will be announced in the near future.

Cox said: “We are going to be fairly modest in our approach to our service fees. We are not aggressive in pricing our stallions, but the market has been very, very strong on the back of what was a year of trepidation.

“Full credit to the industry and participants and everyone involved that we are in this fortunate position where the market is strong, racing is strong and it is an industry that is getting great cut-through as people are enjoying getting involved in racing and betting on it.”

FIRST PUBLISHED 11:54AM, MAR 15 2021
When you’ve got four exciting prospects, then you go to market with four horses