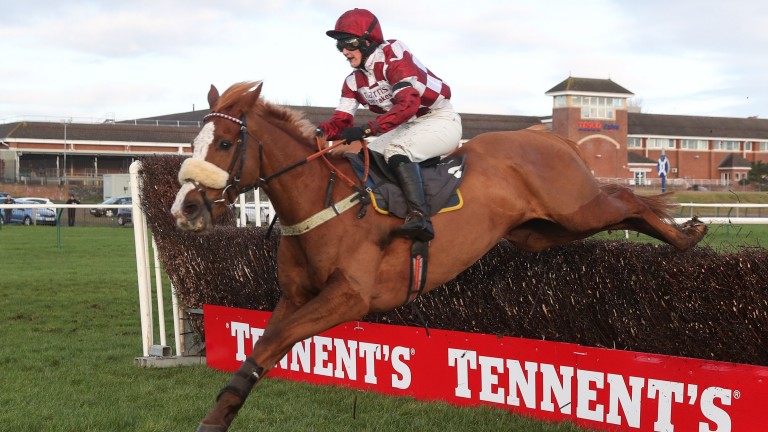 Geronimo arrives at Ayr with a different back story to most of his rivals in the Coral Scottish Grand National, even if it is rather prosaic compared with another horse to have been bred by Ann Lee and her ex-husband Bill.

A few years ago, the Lees were involved in one of the more unusual sales ring tales when parting with Moselee at Brightwells Ascot. The gelding cocked a snook at the conventions of interbreeding as he was the product of a complete accident; his two-year-old brother Does It Matter had got loose in the paddock and decided to impregnate his own mother, Flopsy Mopsy.

Unbeknown to Ann Lee, who had been anticipating the mare bearing a foal by Carlingford Castle, she later delivered her son’s son Moselee. Still a bona-fide thoroughbred, he was bought for £1,400 but failed to complete in a handful of point-to-point starts.

Geronimo still has plenty of interest to offer himself, even if his family tree is less complicated than those of a well-known soap opera. Sandy Thomson’s low-weighted eight-year-old, who has accrued two victories at Ayr already this term, is the only foal of the Double Trigger mare Triggers Ginger, who produced him in 2011 before embarking upon her own racing career.

"I bought Triggers Ginger as a foal, we were going to sell her as a store but nobody wanted her, so we asked someone at Ascot to take her home and break her in," Ann Lee explains.

"I went to get her with a view to racing her but when I picked her up again her tail had dropped out, her mane had dropped out and her feet were falling off. We didn’t know what it was but the farrier thought it was selenium poisoning. The vet said it would be like having a huge dose of chemotherapy and we didn’t really want to run her because she’d been through so much.

"So we box-rested her for six months, and to see if she could conceive, we sent her to the closest, cheapest stallion we could find, which was [former Batsford Stud resident] Kadastrof."

Even after Geronimo appeared, Triggers Ginger was still only six. Seemingly sound, she was sent into training with Jimmy Tarry and ended up winning several point-to-points. She later ran under rules, cutting little ice for Charlie Longsdon and finishing second at Huntingdon three years ago for Paul Cowley.

"She actually looks much classier than Geronimo, a nicer-looking mare than he is a horse, and maybe a bit quicker. She was very unlucky and much better than her form showed," Ann explains.

"Sandy Thomson trains a horse for me called Mcgowan's Pass and bought another I bred called Chain Of Beacons. He asked me what else I’d got, and so we sent Geronimo up there to see how he got on with him, and Sandy found an owner for him."

The progress made by the chestnut in the 14 months since he first set foot on a racecourse has been a pleasant surprise, and he has yet to finish outside the first three in eight starts.

"I’d be absolutely thrilled but I do worry that the ground might be a bit quick and he’s a little inexperienced," Ann said of the prospect of Geronimo replicating the feat of Merigo, the last home-trained winner of the Scottish marathon back in 2009. "It’s a lot to ask after just a few runs in a race of that class."

And there could be the unexpected bonus of a handsome pedigree update for 14-year-old Triggers Ginger, who now resides in a field at Bill Lee’s farm near Silverstone in Northamptonshire, blissfully unaware of her son’s exploits.

Although Bill's former wife does not intend to cover her again, it would surely be tempting.

"It does cost more than it’s worth to breed from her, especially if she were to get a chestnut filly, so I don’t think it’s worth it," she said.

"She’s had quite a life and she’s such a character, one of my favourites. She was quite lucky to get over it all, really."