German stallion ranks strengthened by the arrival of Helmet 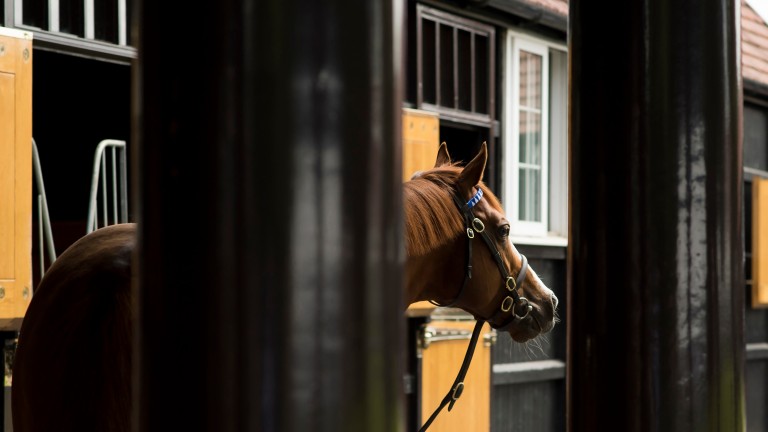 Helmet at his former base of Dalham Hall Stud in Newmarket
Edward Whitaker
1 of 1
By Ollie O'Donoghue UPDATED 5:48PM, OCT 27 2018

Helmet, whose leading son Thunder Snow won the Dubai World Cup by almost six lengths in March, will switch from Dalham Hall Stud to Gestut Fahrhof for the 2019 breeding season.

The ten-year-old son of Exceed And Excel won the Inglis Sires' Produce Stakes and Champagne Stakes at two and returned at three to win the Caulfield Guineas, before joining the Darley roster.

"We have very good stallions in Germany, but not too many," said Gregor Baum of Fahrhof. "Bringing an international miler to Germany is a big win."

"It's always very difficult to get an international stallion that's already tested and not a debutant," added stud manager Stefan Ullrich. "With Helmet we have succeeded."

The sire has also has made his mark with his sons and daughters in Italy, with Anda Muchacho landing a mile Group 2 at San Siro last Sunday and Met Spectrum having won three Listed races there. Another son, Eqtiraan, won the Listed Cathedral Stakes sprint at Salisbury in June last year.

Being a Danehill-line sire should also help Fahrhof attract German breeders with their newest recruit, with Holy Roman Emperor responsible for this year's Preis der Diana heroine Well Timed and Kodiac the sire of Best Solution, who landed two top-flight races there this season.

Thunder Snow, who also won the second round of the Al Maktoum Challenge in Meydan, holds a live chance in the Breeders' Cup Classic at Churchill Downs next Saturday, for which he is a general 12-1 shot.

Helmet stood his sixth season at a career-high fee of £12,000 earlier this year, while a fee for next year will be announced at a later date.

Gestut Ittlingen and Gestut Brummerhof have also acquired shares in the stallion.

Stud news in brief: Guignol to stand in France and fee confirmed for Seahenge