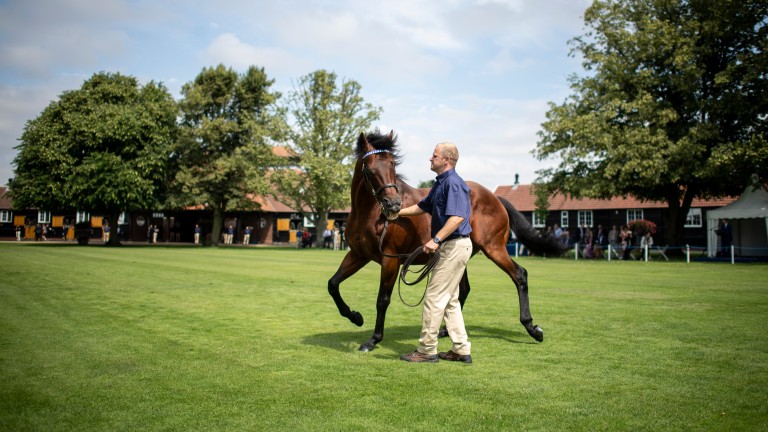 Dubawi: set to cover Diamanta at Dalham Hall Stud this season
Edward Whitaker
1 of 1
By Martin Stevens UPDATED 11:57AM, JAN 10 2020

Last year's Preis der Diana heroine Diamanta will be one of the many elite names to feature in Dubawi's book at Dalham Hall Stud in 2020.

The daughter of Maxios, owned and bred by Gestüt Brümmerhof, was saddled by Markus Klug to a surprise but convincing victory in the Dusseldorf Classic in August, scoring by a length and three quarters from Naida.

That turned out to be the filly's last race as an injury ruled her out of her intended swansong in the Prix de Royallieu.

Previous winners of the German Oaks have been in the headlines as broodmares in recent weeks, with Salomina (successful in 2012) having been responsible for Salios, a son of Heart's Cry who was the impressive winner of the Grade 1 Asahi Hai Futurity Stakes at Hanshin, and Penelopa (2013) being represented by John Gosden's five-length Lingfield novice stakes winner Disco Fever.

Further back on the race's roll of honour are important blue hens such as Anna Paola, Elle Danzig and Night Petticoat.

“We're very happy to get a chance to use a stallion as remarkable as Dubawi for a first partner,” commented Gestüt Brümmerhof's Julia Baum on the decision to use the sire of 41 Group/Grade 1 winners including Ghaiyyath, who in 2019 landed Germany's most prestigious all-aged race, the Grosser Preis von Baden, by 14 lengths.

“We'll also send a lot of our mares to Ireland and Britain this year, using Sea The Stars twice as well as Blue Point, Showcasing, Lope De Vega, Too Darn Hot, Zoffany, Gleneagles and so on.

“As you see, we keep adding spice to the German bloodlines!”

It was a standout year for Gestüt Brümmerhof in 2019 as it smashed the BBAG yearling sale record by selling a Sea The Stars filly out of Anna Mia (a descendant of Anna Paola) to Godolphin for €820,000 and campaigned its homebred colt Waldpfad to win the Hackwood Stakes and finish placed in the Goldene Peitsche and Haydock Sprint Cup.

The Dominik Moser-trained Waldpfad has obvious breeding appeal as a high-class son of Shamardal from the red-hot family of Arc hero Waldgeist and his exciting half-brother Waldkonig, and Baum said: “The intention is to try to go back to England and perform in the top sprint races.

“He's by Shamardal from one of the best German families, so he is destined to be a stallion. Fingers crossed he will be by the end of 2020.”

Another reason for Gestüt Brümmerhof to look forward to the year ahead is the launch of three-time Group 1 winner Best Solution as a stallion in Germany. The son of Kodiac is standing at Gestüt Auenquelle at a fee of €6,500 in a joint-venture by the Baums' stud, Gestüt Röttgen and Gestüt Hof Ittlingen.

“He's been bought to support German breeding as we need high-profile stallions in the country,” said Baum. “He comes from a very nice family and being a Kodiac was so attractive, so we agreed to give him a chance.

“He suits nearly every German mare in size and pedigree, so we'll see if he will make his way.”

Best Solution is out of the Kingmambo mare Al Andalyya and hails from an outstanding Juddmonte family that has yielded Classic winners Brian Boru, Flute, Qualify and Workforce.