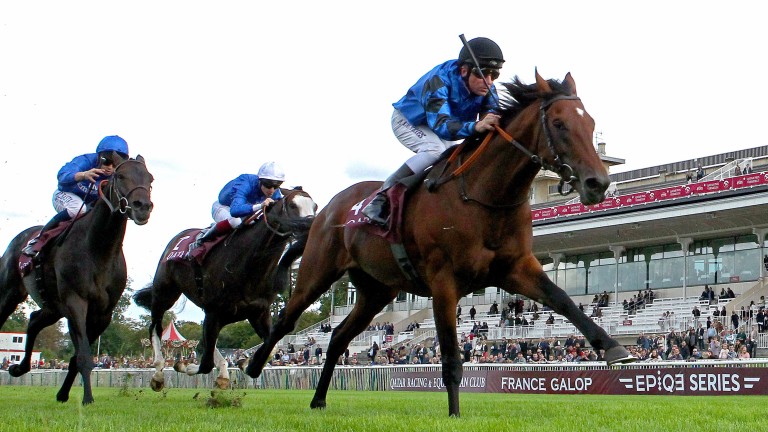 Last year's champion older horse in Germany, Dschingis Secret, has been retired and will commence his stud career at Larissa Kneip's Haras de Saint Arnoult in Normandy next year for a €4,000 fee.

The five-year-old son of Soldier Hollow recorded an impressive four Pattern wins in Europe last year including the top-flight Grosser Preis von Berlin and the Group 2 Prix Foy at Chantilly, and annexed the Group 2 Grosser Hansa-Preis at Hamburg this season.

During his Classic season, Dschingis Secret was a half-length third to Isfahan in the Deutsches Derby.

Kneip said: "Thanks to his international successes, Dschingis Secret is well known to all racing lovers and thoroughbred breeders, and thanks to the stud's central location in Normandy, he is likely to attract mares from all over Europe."

Bred by Gestut Park Wiedingen, Dschingis Secret is from one of the most active families in Germany, where this season his brother Destino won a Group 3 over 1m4f and finished a neck second to Weltstar in the Deutsches Derby.

Their dam Divya, one of five mares to have produced more than one European Pattern winner this season, is a Platini sister to dual Group 3 winner Deva, who produced this year's Grosser Preis von Lotto Hamburg scorer Devastar, by Areion.

The other four mares who have produced more than one Pattern winner this season are Dialafara (Capri and Cypress Creek), Halfway To Heaven (Magical and Rhododendron), Highphar (Castellar and Recoletos) and Waldlerche (Waldgeist and Waldlied)

Dschingis Secret's sire Soldier Hollow, an 18-year-old son of Sadler's Wells stallion In The Wings, is the most in-demand stallion in Germany, where he commands a €25,000 fee.

Other sons of the stallion at stud include Haras de la Hetraie resident Pastorius and Haras du Thenney inmate Ivanhowe.

Hermosa a fourth Group winner for dam Beauty Is Truth

FIRST PUBLISHED 12:54PM, OCT 1 2018
Dschingis Secret's sire Soldier Hollow is the most in-demand stallion in Germany, where he commands a ?25,000 fee