Tom Peacock catches up with the operation's manager Simon Marsh 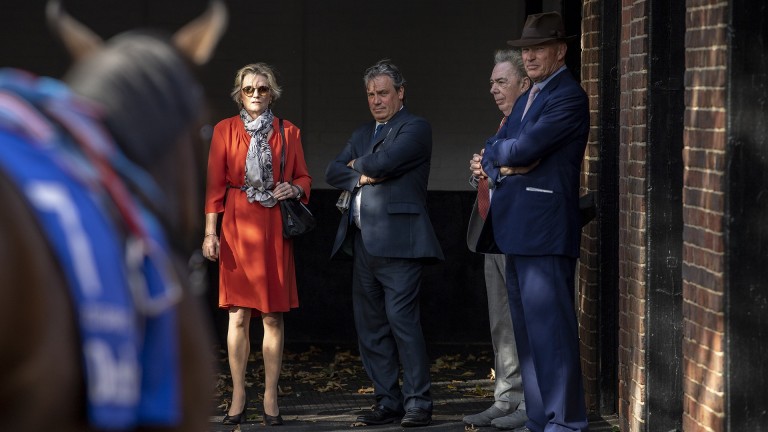 These truly are times to savour for Lord and Lady Lloyd-Webber's Watership Down Stud.

Although their breeding operation, encompassing the eponymous estate in Berkshire as well as Kiltinan Castle Stud in County Tipperary, has produced a slew of top-level winners already, its stock has never been higher following the feats of champion two-year-old Too Darn Hot and his full-sister and St Leger runner-up Lah Ti Dar.

Another son of Dubawi out of Dar Re Mi was the most expensive yearling sold at auction last year when joining Qatar Racing for 3,500,000gns at the Tattersalls October Book 1 Sale.

"She was a star in Italy before we bought her, being the dam of three Group 1 winners in Jakkalberry, Crackerjack King and Awelmarduk," says Marsh. "She has got a Lope De Vega yearling, a Lope De Vega foal, and is visiting Kingman this year.

"The mare had been to Shamardal twice, producing not only Crackerjack King but Joyful Hope, who was a Listed winner and Group 2-placed in the Italian Oaks. We own her in partnership with Andrew Rosen and she’s in foal to Siyouni and is visiting Dubawi this year."

A three-time Group 1 winner, the mare delivered Musidora-winning So Mi Dar as well as Lah Ti Dar and Too Darn Hot.

"She’s at Watership Down at the moment and is due to foal on April 8, so there’s not long to go," Marsh said. "She’s in foal to Dubawi, which is very exciting, and funnily enough she’s going back to him; everything she’s had by him has been of stakes class. She’s got a Dubawi filly yearling on the ground who’s another absolutely beautiful filly who’ll be retained to race."

6yo bb Dansili - Together (Galileo)
2019 covering sire: Kingman
A runner-up in the Kilboy Estate Stakes for Aidan O'Brien, she went on to compete at Graded level in America before resurfacing at the last Tattersalls December Sale. Boasting a desirable Coolmore pedigree, she was bought by Charlie Gordon-Watson Bloodstock for 925,000gns.
"We're delighted to have been able to add her to our broodmare band as she’s a Group 2-placed daughter of Group 1 winner Together," Marsh said. "She’s a very good-looking correct mare who’s in foal to Lope De Vega, and we’re sending her to Kingman. I think he’s a really exciting sire prospect, hopefully his three-year-olds will train on and he’ll go from strength to strength."

Sons Mooharib and Argentello have performed with credit but Marsh says there could be better to come. "She’s a half-sister to Dar Re Mi by Selkirk, and a complete outcross.

"She’s a lovely mare and is producing fantastically well. She’s got a three-year-old called Trethias (owned by Stonethorn Stud Farms) who Jessie Harrington tells me she’s very happy with and is being aimed at a Guineas trial. She had a very nice Muhaarar filly whom we sold at Book 1 last year for 370,000gns [expected to go to John Gosden]. She’s just had an Australia filly foal and has been scanned in foal to Frankel."

Living up to her name with a string of winners as well as a smart prospect who carried Watership Down's pink silks last term.

Marsh said: "She’s the dam of Group 1 winner Gorella as well as a filly we’ve got in training with Ed Walker, Royal Intervention, owned in partnership with Will Farish of Lane’s End Farm. Royal Intervention suffered a slight injury after finishing second in the Princess Margaret but has done exceptionally well over the winter and we’re very excited about her three-year-old campaign.

"Exciting Times is due to be covered by Saxon Warrior. We're big believers in him - he’s got an exceptional pedigree being by Deep Impact out of a Group 1-winning mare, as well as winning Group 1s himself at two and three. We were very keen to find a mare for him."

Another to arrive at Watership Down through the sales, Kelly Nicole was a three-time winner for Kevin Ryan before a transfer to Germany.

"She’s the dam of [Group 2 Summer Mile winner] Aljamaaheer and has a Dubawi colt yearling," Marsh said. "She’s due quite late to to Sea The Stars and is visiting Roaring Lion, who I went to see at Tweenhills Stud and think is the most beautiful horse. He was exceptional on the track as well as being good-looking, not too big, and a great mover."

There is plenty of reason to believe this high-class racemare can continue the influence of her mother.

"She’s just had her first foal, a filly by Galileo, who was born on February 5," Marsh said. "We were very keen that she went to Galileo in her first year and her foal is very nice. She’s being a very good mother and they’re both doing really well. She’s going to Sea The Stars, who I think is a fantastic stallion. Sea The Stars has good size, which will suit her, and was obviously an exceptional racehorse who has become an exceptional stallion."

It should not be forgotten that Watership Down produced another multiple Group 1-winning mare from a different line. The daughter of Ribblesdale runner-up Twyla Tharp took an Irish Champion and a Prince of Wales's Stakes in a distinguished career.

"We got an opportunity to send her to Shamardal this year and we were very keen to use him as he's an exceptional sire who is proving to be a very good broodmare sire, also the Dansili cross seems to work well. She was covered on February 28. It would be fantastic if she can get in foal and we could have a Shamardal filly." 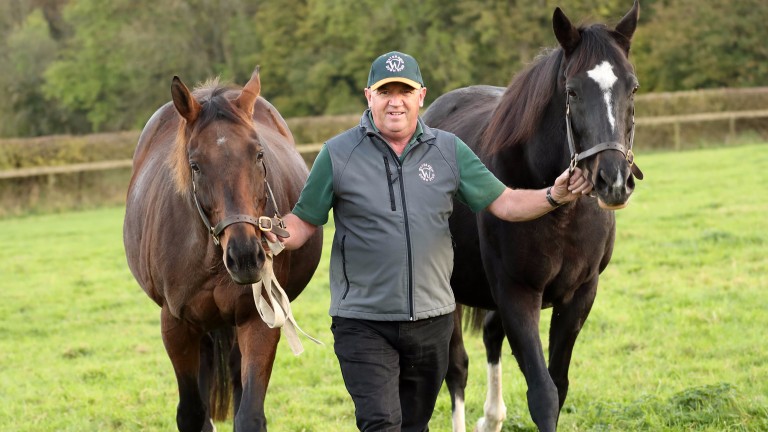 A pair of aces: Dar Re Mi (left) and The Fugue (right) with stud manager Terry Doherty
MATTHEW WEBB

A strong relationship has been fostered between Watership Down and John Gosden over the years through the exploits of The Fugue and Dar Re Mi. It continues onwards not only with Too Darn Hot and Lah Ti Dar but into the next generation.
"It’s a very unusual thing for the Lloyd-Webbers to have a colt in training, because as was widely publicised we couldn’t sell Too Darn Hot because he had a minor veterinary problem as a yearling," Marsh explained.
"Obviously it hadn’t affected him at all, so we decided to retain and race him ourselves, and the rest is history. I saw him last month, he seems to have done extremely well during the winter. He’s really filled out and developed as much as you could expect from two to three.
"His sister Lah Ti Dar stays in training and Qatar Racing said they would send the two-year-old we sold to John Gosden too. It’s incredible that John would have all three full-siblings there at the same time."
FIRST PUBLISHED 7:30PM, MAR 7 2019
She?s got a Dubawi filly yearling on the ground, who?s another absolutely beautiful filly who?ll be retained to race