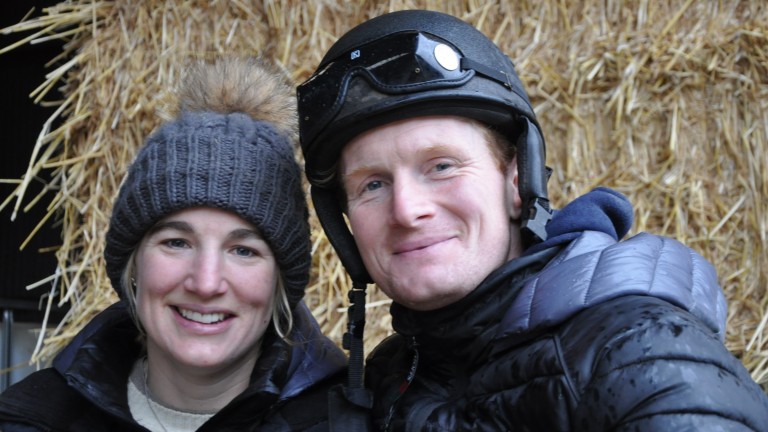 Francesca Nimmo and Charlie Poste are becoming a force from their Warwickshire base
Carl Evans
1 of 1
By Tom Peacock 5:05PM, FEB 22 2019

Francesca Nimmo believes that Jonjo O’Neill could have found himself a bargain despite the transfer of British point-to-point winner Garry Clermont costing the trainer £150,000 at Thursday’s Tattersalls Cheltenham February Sale.

It was a new personal best for Nimmo and her partner Charlie Poste, who are making a steady impact by bringing along young stock at their base at Station Yard in Warwickshire, as well as breaking in horses for the likes of Olly Murphy.

Garry Clermont joined the couple for just €24,000 at the Goffs Land Rover store sale last summer and made a quick transition into a racehorse, bolting up in timely fashion between the flags at Bangor the Sunday before the auction. The acquisition by agent Matt Coleman on behalf of O’Neill was the joint-fifth most expensive lot at a sale which attracted plenty of competition.

"For us it was a great start, for a sale it’s the most expensive one we’ve sold so far," said Nimmo, who was at the Cheltenham event while Poste was on his day job riding at Huntingdon.

"We think the world of him. As I said to someone at the sale, I still think probably he’s good value even for what people seem to think is at the upper end for an English point-to-pointer.

"It’s up to them what they want to do but he’s got loads of speed and looks like he’s got a real good turn of foot."

As a son of the late Haras du Lion stallion Maresca Sorrento from a family with essentially minor French form on his dam’s side, he represented an unknown quantity when Nimmo picked him up.

"We end up buying a lot more on what they look like than their page, because from our point of view we just don’t have that much money to spend on them. You kind of have to compromise with one thing or the other, and we just try to buy an athletic model.

"We loved him literally from the word go, he’s just a natural athlete, he always found everything very easy even from the day we broke him in."

Nimmo and Poste’s operation has only developed in the last few years but they are hoping that Garry Clermont is not the only investment to turn a healthy profit.

"It takes the pressure off some of the others a bit," she said. "We’ve got about a dozen four-year-olds to run, and there are definitely a few smart ones in there as well.

"If we can sell them privately before they run, then all the better. It’s great this horse won on the Sunday, as then straight to the sale was an ideal situation."

Brexit uncertainty and anger among industry figures north of the border

FIRST PUBLISHED 5:05PM, FEB 22 2019
He?s just a natural athlete, he always found everything very easy even from the day we broke him in.