Martin Stevens on the champion's growing success as broodmare sire 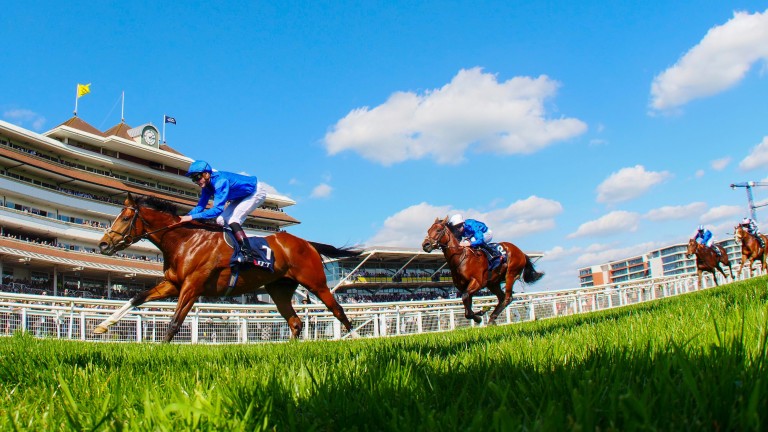 Barney Roy was one of three stakes winners over the weekend for Galileo mares
Mark Cranham
1 of 1
8:55AM, APR 26 2017

Last year Aidan O'Brien trained the winners of 20 Group 1 races, only two of whom were not by Galileo. The master of Ballydoyle and, by extension, his patrons at Coolmore are - for the moment at least - clearly dependent on the phenomenal sire to sustain their domination of the best races.

The heavy reliance on Galileo, exacerbated by the early death of his distinguished former studmate Montjeu, is no bad thing. And though it is now – gulp – 16 years since his scornful dismissal of Golan in the Derby, he has covered only blue-chip racecourse performers and producers right up to and including this season, so Coolmore can be assured of having three-year-olds by him racing at least up to 2021.

Still, the topic of the post-Galileo era and the anointment of an heir must come up in discussion around the Coolmore boardroom table.

Will it be one of his sons - Australia, Gleneagles or The Gurkha perhaps - who takes up the mantle? Or will it be new blood – the influence of Scat Daddy or War Front, responsible for O'Brien's only two non-Galileo Group 1 winners in 2016 - that comes to the fore?

The past weekend reminded us that Coolmore might not lose too much sleep over the issue any time soon; the reason being that finding a pre-eminent sire like Galileo is, quite literally, only half the battle in breeding.

They have the lion's share of Galileo's best performing and best bred mares, and will only amass more in the coming years. And three new stakes winners out of his daughters - not necessarily the most highly qualified producers - since Saturday suggests they will be a powerful part of the operation's armoury.

Barney Roy kickstarted the treble for Galileo mares with his impressive victory in the Greenham Stakes. Now a leading fancy for the 2,000 Guineas, if he were to win the Newmarket Classic next month he would be the third colt out of a Galileo mare to do so in the last four years after Night Of Thunder and Galileo Gold. His dam, Alina, was unplaced in her two starts in France but is out of Group 3 winner Cheyenne Star and was purchased by the Newbury winner's breeder Sun Stud for 65,000gns.

Sistercharlie stamped her Classic claims with a length victory in the Group 3 Prix Penelope at Saint-Cloud on Sunday. She was bred by Ecurie des Monceaux out of Starlet's Sister, a daughter of Galileo and Del Mar Oaks third Premiere Creation, whose best effort in a light campaign was a second on the all-weather track at Deauville.

Vociferous Marina, the clear-cut winner of the Listed Salsabil Stakes at Navan on Sunday, completed the weekend three-timer for maternal grandchildren of Galileo. She was bred by her trainer Jim Bolger out of Marina Of Venice, a half-sister to Listed winner Dawnus who won her maiden at the Curragh in good fashion but was not up to the task when upped in class on her subsequent starts.

None of those Galileo mares was any great shakes on the track and the stallions responsible for Barney Roy, Sistercharlie and Vociferous Marina - Excelebration, Myboycharlie and Vocalised – are far from expensive with fees of €10,000, €4,500 and "on application" (but bound not to be too steep).

Galileo mares are, you might infer, an improving ingredient in a pedigree - don't forget they also produced the top-notchers Chopin and La Collina to the obscure German sire Santiago and the hardly missed Strategic Prince - and they could hold the key to the prosperity of Coolmore in the near future, even after their great sire's passing.

Alice Springs, Ballydoyle, Curvy, Found, Marvellous, Minding, Misty For Me, Rhododendron, Seventh Heaven, Tapestry, Together, Together Forever and Was are just the top level-winning tip of the iceberg of Galileo mares in the Coolmore broodmare band or set to join it eventually.

Whichever elite outcross sires they are mated with – Fastnet Rock, War Front or whoever - they will give "the lads" an advantage over their rivals for many years to come.