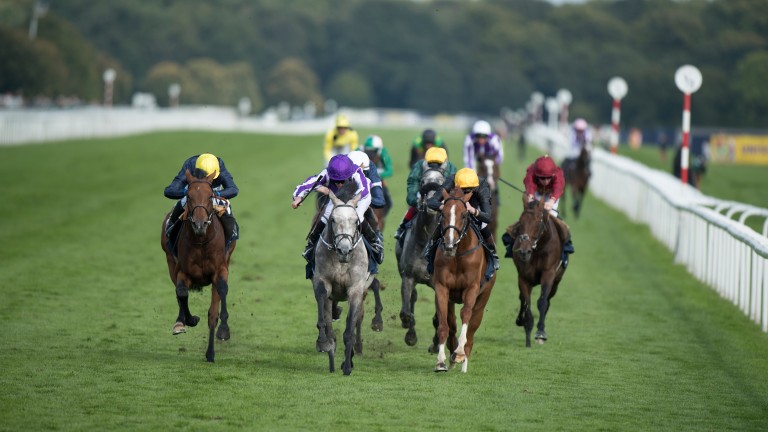 A searching pace meant this year's St Leger was every bit the test of stamina and resolve the season's concluding Classic is supposed to be, and, almost inevitably, it was a son of Galileo who proved the hardiest.

With two furlongs left to run Capri was flanked by a pair of challengers, on his left Stradivarius - a son of Sea The Stars - and on his right Coronet, the only filly in the race and a first Leger representative for Dubawi.

As the final furlong loomed the filly faltered, but no sooner had she given way than Crystal Ocean, another son of Sea The Stars, took her place on Capri's outside. Sir Evelyn de Rothschild's homebred got to Capri's girth but no closer, as the gallant grey, with head bowed, kept pulling out more to provide his sire with his seventh British or Irish Classic in 2017.

One of 68 top-level winners by his sire, Capri becomes Galileo's second St Leger winner, following on from his first-crop son Sixties Icon, who landed the race in 2006, the year the contest was staged at York.

In the intervening period the progeny of Galileo have landed 28 other British and Irish Classics. In doing so they, along with a plethora of other top-class talents, have elevated the king of the Coolmore stallion ranks to a level of absolute domination that now sees him with almost four times as much annual prize-money earnings as his nearest pursuer, Dubawi.

Despite very much representing Coolmore, having been bred by Lynch Bages and Camas Park Stud and having carried the colours of the Coolmore partners, Capri's pedigree was forged by a different racing and breeding powerhouse altogether.

He is the third foal produced by Dialafara, a winning daughter of Anabaa, who was culled by the Aga Khan and sold to Mags O'Toole for €175,000 at the Arqana Breeding Stock Sale in December 2010.

In turn she is out of the Linamix mare Diamilina, a Group 2 winner and Prix Vermeille runner-up, herself a half-sister to the triple Group 1 runner-up Diamond Green and also to the dam of Luca Cumani's 2008 Melbourne Cup second Bauer.

Dialafara has five other offspring on the ground, all by Galileo, including Capri's two-year-old brother Cypress Creek, who is yet to run but is entered at Galway next Tuesday, and is among the 448 provisional participants in the the 2018 Derby.

Dialafara is not the first mare with Group 1-winning progeny to be sold by the Aga Khan, as the operation has also parted with Darkova - who went on to produce the champion Almanzor, and Hazariya - who was offloaded before her son Harzand became a dual Derby winner.

He may have supplied the winner, but the St Leger was not such a success for Galileo's other three runners in the race however. The Anvil finished a heavily eased last having gone off far too hard, while Venice Beach and Douglas Macarthur could only finish eighth and ninth respectively.