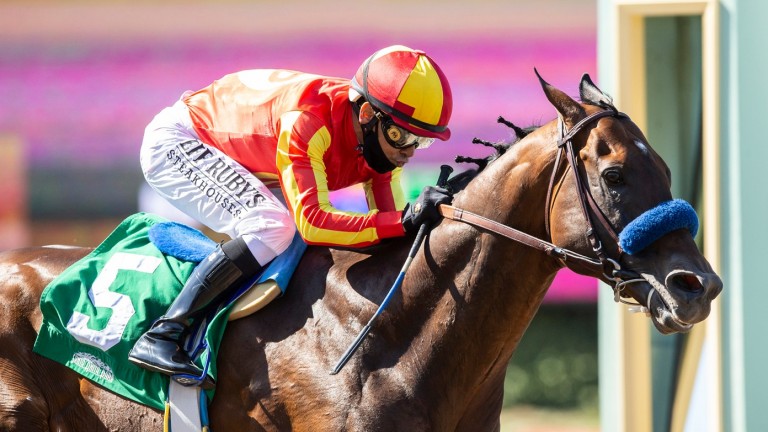 McKinzie: heading to the Runhappy Met Mile for his next start
Benoit Photo
1 of 1
By Bloodhorse Staff 2:33AM, JUN 23 2020

The son of Street Sense will begin his stud career at Gainesway Farm upon his retirement from racing, the farm has announced.

"It is very exciting to stand a horse with McKinzie's credentials at Gainesway," said bloodstock director Alex Solis II.

"I don't believe there is a more exciting prospect than McKinzie out there. We are grateful to Mike Pegram, Karl Watson, Paul Weitman, and Bob Baffert for this fantastic opportunity."

To date, McKinzie has earnings of over $3.4 million and has run first or second in 13 of 15 Graded stakes during his career.

Gainesway's general manager Brian Graves noted: "McKinzie is a Grade 1 winner at two, three and four from distances of seven to nine furlongs.

"His speed, versatility, and soundness make him an absolute standout. His ten individual triple-digit Beyer figures are truly impressive."

McKinzie burst onto the scene as a juvenile, breaking his maiden on debut. He went on to win a Grade 1 at 2 when he took the Los Alamitos Cash Call Futurity.

At three, the colt picked up two more Grade 1 wins in the Pennsylvania Derby and the Malibu Stakes.

At four, he added two more Graded wins in the Alysheba Stakes at Churchill Downs and the Whitney Stakes at Saratoga over dual Grade 1 winner Yoshida and eventual Breeders' Cup Classic winner and Eclipse champion Vino Rosso, where he ran a 111 Beyer.

"From day one, McKinzie has just been exceptional," said Baffert. "He is a gorgeous physical with brilliant speed and stamina. I've only had one other horse in my career that has been able to accomplish what he's done by winning a Grade 1 at two, three and four. It takes an extraordinary horse to achieve that."

McKinzie is out of Runway Model, a dual Grade 2 winner who was third in the 2004 Breeder's Cup Juvenile Fillies and went on to be runner-up in the Ashland Stakes. She was sold by the Taylor Made Sales Agency to Summer Wind Farm for $2.7m at the 2006 Keeneland November Breeding Stock Sale.

"The plan with him going forward is to return in the Runhappy Met Mile on July 4," said Baffert. "Hopefully, this will put us in an excellent position to earn Horse of the Year honours and champion older horse of 2020."

For more news on US racing and sales, visit bloodhorse.com

FIRST PUBLISHED 2:33AM, JUN 23 2020
From day one, McKinzie has just been exceptional. He is a gorgeous physical with brilliant speed and stamina