Full Mast retired to stand at Haras Chenaut in Argentina 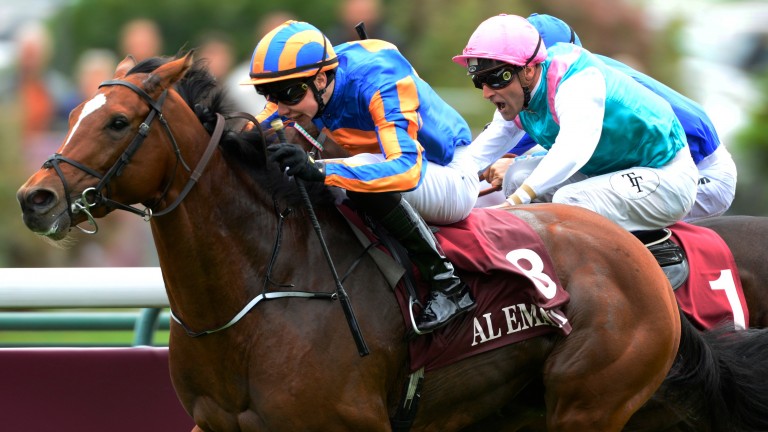 Full Mast (pink cap) finishes behind Gleneagles before being promoted to first place in the Prix Jean-Luc Lagardere
Alan Crowhurst
1 of 1
By Ollie O'Donoghue 1:03PM, MAR 25 2017

Full Mast, who was awarded the 2014 Prix Jean-Luc Lagardere in the stewards' room, has been retired to stand at Haras Chenaut in Argentina.

The first past the post on that occasion was future Classic scorer Gleneagles, who was judged to have caused interference by drifting right in the closing stages.

Trained by Criquette Head-Maarek, Full Mast also won the Group 3 Prix la Rochette at Longchamp, before crossing the Atlantic to join the yard of William Mott in the US, for whom he finished a close fourth to Tepin in the 2016 renewal of the Woodbine Mile.

A Juddmonte homebred, the five-year-old son of Mizzen Mast is a half-brother to Sound Of Nature, who was second in a Group 2 over a mile in Australia. He is out of the Danzig mare Yashmak, who in turn is out of the blue hen Slightly Dangerous, who also produced dual Derby winner Commander In Chief, dual Group 1 winner Warning, Derby runner-up Dushyantor and Fillies' Mile second Jibe.

Full Mast follows in the footsteps of Orpen and Mount Nelson, who previously stood at Haras Chenaut.

His fee will be announced at a later date.

Tamarando to join US stallion ranks

High-class juvenile Tamarando has joined the US stallion ranks and will stand at Harris Farms in California at a fee of $2,500.

Trained by Jerry Hollendorfer, he showed his prowess as a juvenile, winning the Grade 1 Del Mar Futurity stakes from Dance With Fate and finishing third in the Grade 1 Futurity at Hollywood Park, both times on synthetic surfaces.

A Larry and Marianne Williams homebred, the six-year-old son of Bertrando is out of the Dehere mare Tamarack Bay.