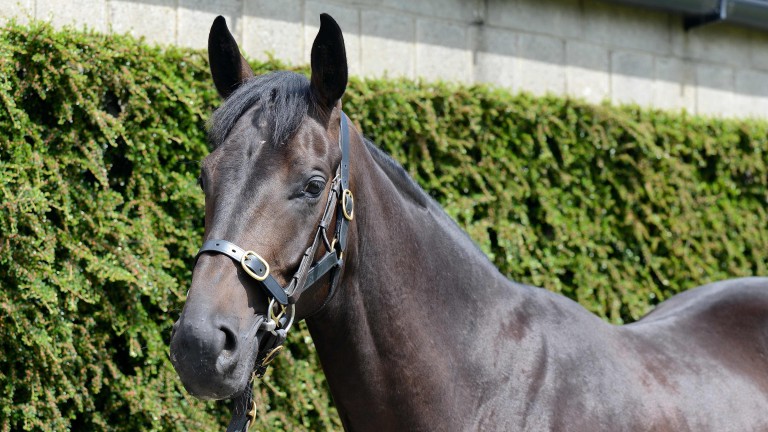 The dramatic eleventh-hour intervention by the Irish public health authorities to ban British buyers from returning to the Tattersalls Ireland sales complex for the first day of Derby Sale trading failed to dampen enthusiasm and demand for store horses on Wednesday.

Topping the session at €160,000 was a full-brother to last year's Grade 1 Champion Bumper winner Ferny Hollow.

Offered by the Parkhill family, the Westerner gelding out of Mirazur was one of the hotly anticipated lots and did not disappoint in the flesh, the handsome brown gelding living up to his illustrious ancestry; his second dam is a half-sister to the Champion Hurdle-winning siblings Morley Street and Granville Again and to the dam of another Cheltenham Festival Grade 1 winner in City Island.

He was one of five purchases by Paul Holden and Michael Shefflin on Wednesday and the latter is hoping the gelding will be another successful point-to-point graduate for the pair.

"He was a standout today, definitely," said Shefflin. "He’s a full-brother to Ferny Hollow and I just thought he’s a very good looking horse, he fits the bill. He’s a great moving horse, a great walker, and stands up very well. I just feel he’s a very nice horse.”

The duo’s buys included three more six-figure purchases. They picked up the only horse in the sale by Jukebox Jury, offered by Moanmore Stables, for €130,000, while Glacken View’s Doctor Dino gelding, named Laudamus, cost them the same sum, while they also purchased a Walk In The Park gelding from Castledillon Stud for €105,000.

Ken Parkhill after topping Day 1 of the Derby Sale when selling Lot 131 for €160,000 to Michael Shefflin & Paul Holden pic.twitter.com/rJ9ZTjwtDF

Jukebox Jury’s daughter Princess Zoe put in a powerful performance to finish second in the Gold Cup at Royal Ascot last week, but his representative at Fairyhouse is unlikely to follow her down the Group 1 staying route on the Flat, as Shefflin and Holden have a different path mapped out for him.

Shefflin said: "He’s a very nice horse, I love the sire, this is a good pedigree and he has a bit of size. Jukebox Jury is by Montjeu, the same as Walk In The Park, and they are good sires. The plan will be to go point-to-pointing.”

The Westerner gelding bought by Shefflin and Holden was one of four horses offered at the sale by the Parkhill family, who have bred a Grade 1 winner at each of the last three festivals, including 2021 Grade 1 Ballymore Properties Novices’ Hurdle winner Bob Olinger.

They were also the breeders and consignors of the sale’s most expensive Doyen gelding, who made €72,000 to Matt Coleman online. He is from a different branch of the sale-topper’s family as a son of the Presenting mare Highly Presentable, whose dam High Ace is an unraced half-sister to Granville Again and Morley Street and to the second dam of Ferny Hollow’s brother.

A delighted Ken Parkhill provided an honest assessment of the Westerner gelding and his exciting older brother, saying: “This family has been good to us. This horse is much nicer and has more quality than Ferny Hollow. We were hoping that he'd go near to topping the sale.”

Unfortunately Mirazur, dam of Ferny Hollow and his €160,000 brother, is dead but there are three of her daughters in the Castletown Quarry broodmare band and she has a two-year-old Court Cave filly still to come.

Doctor Dino’s progeny were enormously popular with buyers; as well as the aforementioned Laudamus, there was also Norman Williamson’s €100,000 pinhook from the Ballyreddin Stud draft at the 2019 November National Hunt sale.

Long since named Ecrin Vert, he is a half-brother to the Auteuil Grade 2 Prix Congress Chase winner Dream Wish from a family that has deep wells of black type. He will be trained by Denis Murphy following his purchase for €155,000 by Joey Logan.

Logan said: “I tried to buy him here as a yearling for Alan Harte but we were underbidders to Norman. He was a lovely horse then and I saw him a few days ago and liked him as much as I did back then.

“He’s a fine big horse with size and scope by a very good stallion and from an excellent family. He’ll come back to my place to be broken and then will go to Denis.”

From early on Wednesday it was clear that trade would be strong and within the first eight lots were two six-figure sales and another who made €90,000.

There was only one son of Authorized catalogued on the first day of the Derby Sale and noted nursery Sluggara Farm were the consignors. Purchased privately in France, he is a half-brother to Heros D’Ainay, who won a Listed three-year-old hurdle at Auteuil last year, one of three winners so far out of Etoile D’Ainay, winner of the Grade 3 Grand Prix de Pau.

She is a Dom Alco half-sister to Grade 1 Prix Ferdinand Dufaure Chase winner Fleur D’Ainay and Crystal D’Ainay, a dual Grade 2 winner over hurdles for Alan King who was also third in the Grade 1 Stayers’ Hurdle.

Stuart Crawford signed for him at €140,000 under the Highflyer Bloodstock banner and said: “He’s a lovely big athletic type and the owners have had a bit of luck with the sire. Hopefully he’s a longer-term project; he has the size and scope to jump a fence.

“He’s exciting and we’re dreaming at this stage. Obviously the sire’s progeny are getting hard to buy and in some ways this was the easiest part; now we have to get him to realise his potential.”

Tom Malone was one of a number of agents forced to make alternative bidding arrangements at the last moment, after the Irish government revoked the UK essential business bubble due to increasing concerns surrounding the Delta variant of Covid-19.

Mags O’Toole was drafted in to do the bidding on Malone’s behalf and secured five horses for her fellow agent. For champion trainer Paul Nicholls, the Malone-O’Toole axis bought three of the choicest lots headed by the Presenting full-brother to Grade 2 Kelso Premier Novices’ Hurdle winner and Grade 1 Top Novices’ Hurdle second Mount Mews for €145,000.

Their dam is a Bob Back full-sister to Grade 2 Reynoldstown Novices’ Chase, Mildmay Novices’ Chase and December Novices’ Chase winner Burton Port, and he was another successful pinhook for Jimmy Murphy’s Redpender Stud as the Kilkenny man bought him for €58,000 as a foal from breeders Kedrah House Stud.

“He’ll go to Paul’s, settle into the system and hopefully we’ll see him on a racecourse in 18 months’ time,” said Malone speaking by phone at the close of trading. “He’s a gorgeous horse with a lovely pedigree and from a very good farm.

“I thought there was such an array of beautiful horses catalogued this week, real chasing types, and there’s a chance for everyone to buy a lovely horse and for good value.”

Malone and Nicholls also purchased Killeen Glebe’s Blue Bresil gelding out of the Grade 2 Rendlesham Hurdle second Mickie for €120,000, and struck early in proceedings for the Shantou full-brother to Grade 3-placed hurdler Severano, going to €130,000 for Castledillon Stud’s offering. 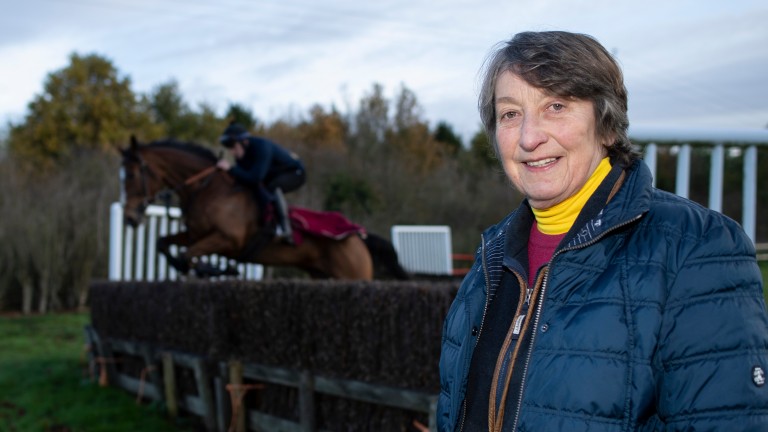 Henrietta Knight: "She is a great looker, I loved the way she walks, she has a lovely air about her too, a great presence."
Edward Whitaker

Presenting’s legacy is safely enshrined as one of the best National Hunt stallions of the modern era and that was reflected in the prices paid for the members of his final crop offered at the Derby Sale on Wednesday.

Two lots before Malone’s purchase came one of just two fillies in the entire sale from the final crop of Presenting and she duly became the day’s most expensive filly, selling to Henrietta Knight for €95,000.

She was a joint offering from Kilbarry Lodge Stud and Mocklershill Stables, and comes from a family of which Knight has an encyclopaedic knowledge.

"She's a gorgeous filly," said Knight. "She's a great looker, I loved the way she walks, she has a lovely air about her too, a great presence. And, of course, I trained Racing Demon; he was a lovely horse. I love Presenting fillies, and she should have good broodmare value.”

The filly is out of Kilbarry Medoc, an Overbury half-sister to Racing Demon, whose career Knight nurtured and his victories included the Henry VIII Novices' Chase. She is a half-sister to the Listed-placed hurdler Kilbarry Way and was bought on behalf of a client for whom Knight has purchased winners previously.

"I have bought for the client here before – that horse won first time out – and he is based in London," she said.

"He just said that if I were over at all that he ought to see if I could buy another one and it didn't matter whether it was a gelding or filly. She'll come back to me now to be broken in."

All the key indicators showed substantial gains over last year’s sale, which was more heavily impacted by Covid-19, starting with a clearance rate of 84 per cent.

The aggregate leaped an astounding 76 per cent to €7,648,500 from the 2020 total of €4,340,700. Both the median and the average demonstrated strong growth too, although not quite as spectacular as that of the aggregate.

The second and final day of the Derby sale gets under way on Thursday from 11am.

FIRST PUBLISHED 8:29PM, JUN 23 2021
This horse is much nicer and has more quality than Ferny Hollow. We were hoping that he'd go near to topping the sale