From doom and gloom to Super Sprint glory for £3,000 filly Bettys Hope 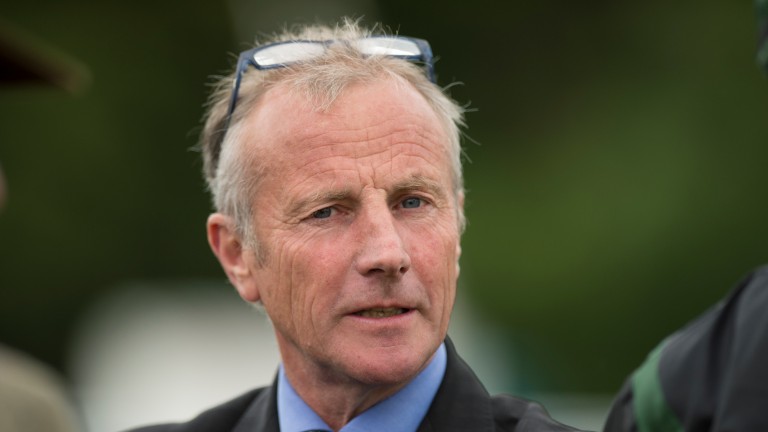 Sometimes buying a cheap yearling works out spectacularly well. Just ask Rod Millman, who landed a prize of £122,925 when winning the Weatherbys Super Sprint Stakes on Saturday with Bettys Hope.

Sourced for a mere £3,000, Millman bought Bettys Hope from her breeder, David Hodge of Llety Farms, at the Tattersalls Ascot Yearling Sale. However, his fruitful shopping trip began with something of a pessimistic outlook, he explains.

"I'd gone to the sales because there were a lot of horses to be sold there and I didn't think there'd be a strong market," says the trainer. "I went there thinking I might bump into some breeders who couldn't sell their horses and might be interested in putting one in training with someone like myself.

"I'm sorry to say it was all rather doom and gloom and there were very few bidders there. There were some really nice horses walking around, though no one asked me to train one for them."

Just when Millman thought the trip from his Devon base had been a wasted one, he happened upon Bettys Hope.

"I was looking around the pre-parade ring with my wife, Louise, and we spotted Betty," says Millman. "She just had that swagger about her so, if she was going for little money, we thought we'd have a go at buying her for ourselves."

Having followed the filly into the Ascot ring, Millman assumed his luck was out when another bidder pushed the filly's price to £3,000.

"I didn't really want to bid £3,500, not because she wasn't worth it but I didn't go there looking to buy," he says. However, when it transpired that the bid of £3,000 had come from the vendor, Millman decided to chance his arm.

"I went to the vendor and told him I'd buy her for what he'd bid and, luckily, he sold her to me," he says. "I was a bit cheeky really as I suppose I should have put another bid in. Llety Farms is a very good stud, they turn out a lot of nice winners." 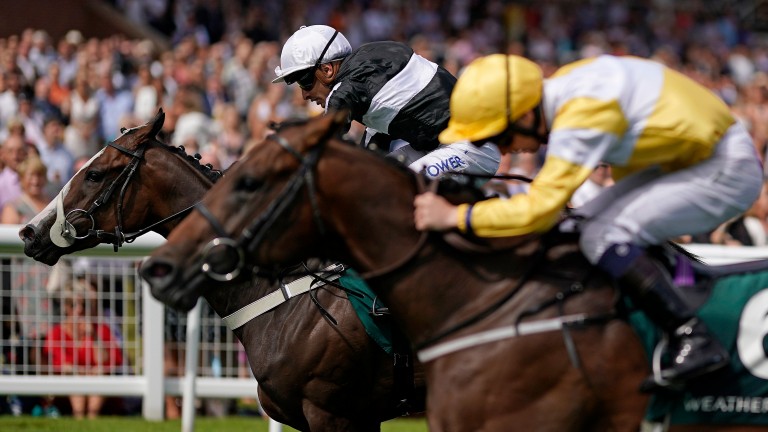 Bettys Hope (black and white) edges out Show Me Show Me in the Weatherbys Super Sprint at Newbury
Alan Crowhurst
Once the daughter of Rathasker Stud's first-crop sire Anjaal was back home, Millman soon felt the filly had the talent to outperform her humble price-tag.

"As we owned her ourselves she was the last two-year-old we broke in, because we wanted to break in the paying customers' horses first," says Millman. "She came to hand early, she was always well-mannered and easy to handle.

"We would have sold her cheaply if someone had come in and bought her, but by February time no one had and she was starting to work quite well, so we decided we'd keep her."

The rest, as they say, is history, as Bettys Hope has now rattled off a hat-trick of victories that began in a Chepstow novice event, took in a valuable Chelmsford nursery and concluded in Newbury's Saturday showpiece.

Millman has now landed the Super Sprint on two occasions, having saddled Lord Kintyre, a son of Makbul picked up for 9,200gns, to win the 1997 renewal of the hotly-contested prize.

However, despite still basking in the afterglow of Betty's Hope's bumper payday, Millman is under no illusions that playing in the middle-to-lower tier of the yearling market does not always prove quite so lucrative. That is a situation he would like to see change. 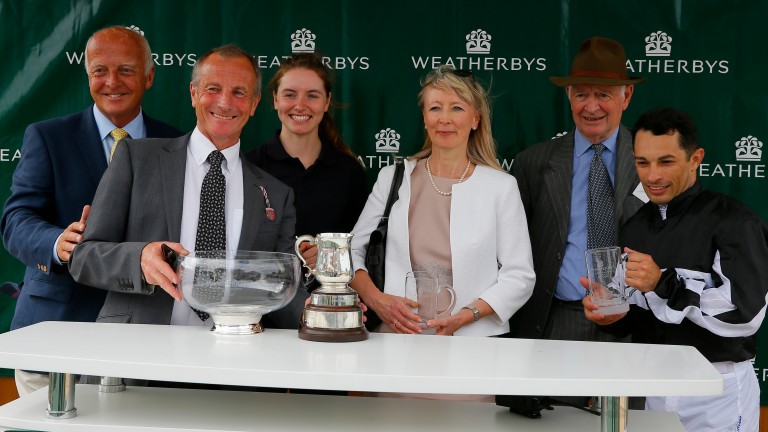 Rod Millman (second left) receives the Weatherbys Super Sprint trophy following the success of Bettys Hope
Mark Cranham
"You don't have to be a rocket scientist to spot the nice ones at the sales, it's having the customers to pay for them behind you," he says, "and the middle to bottom of the yearling market has disappeared.

"If you're at Book 1 or Book 2 [of the Tattersalls October Yearling Sale] or the Doncaster Premier Sale, you have a chance of selling well, but if you don't tick those boxes, you're going to struggle, especially if you're looking to sell a filly.

"In British racing, we have to do more to create an outlet for those yearlings from the middle and bottom tier of the market."

Millman says he has bought countless yearlings down the years to target the Super Sprint, but feels the programme needs more races that offer owners without bottomless pockets the chance to compete for meaningful prizes.

"The Super Sprint has been a great race for us and I've bought a lot of horses with the dream of winning that race," he says. "I'm not a sage or anything, but I think we could be doing more for the cheaper yearling.

While breeders may be about to receive relief in the form of the Thoroughbred Breeders' Association's new Breeders Premium Scheme, which is pending clearance from the Department for Digital, Culture, Media and Sport, Millman suggests auction races framed around lower prices was an avenue worth exploring in a bid to create sustainable demand among end users.

"How many horses were sold for less than £12,000 last year? Those horses have got to go somewhere," he says. "If you had races confined to horses who cost less than £15,000, it would create a market.

"You have to give people an incentive to buy and race that sort of horse though, and at the moment those horses are having to run against £500,000 yearlings from big yards. The market for cheaper horses has been taken away."

Given his recent success, Millman's final observation is perhaps his most thought provoking.

"A lot of those horses from the lower-end of the yearling market aren't bad horses," he says. "They're well capable of winning nice races in the right hands."

Millmans in the money: Super Sprint win makes it all worthwhile says trainer

FIRST PUBLISHED 6:35PM, JUL 22 2019
A lot of those horses from the lower-end of the yearling market aren't bad horses, they're well capable of winning nice races in the right hands