Dom Carlos scores convincingly at the Curragh on Friday 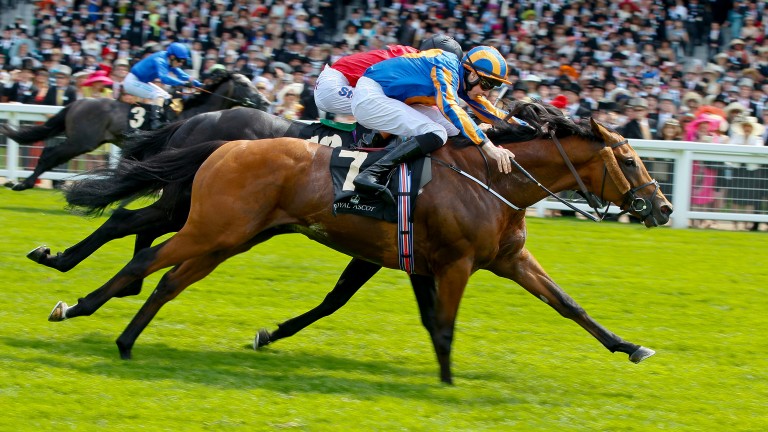 A sire's debut winner is always extra special when there is a link between the generations.

Earlier this season, Jungle Jane got Bungle Inthejungle off the mark carrying the colours of Madeline Burns, whose father Maurice Burns owns Rathasker Stud where the son of Exceed And Excel stands.

Across the pond, Wesley Ward sent out No Nay Never's first winner Mae Never No for Ice Wine Stables, with the same connections having trained and raced the sire.

And on Friday, victory for Dom Carlos in the 5f juvenile median auction race at the Curragh – making him the first winner for sire Gale Force Ten – built a bridge between his handler Joseph O'Brien's previous life as a jockey and current vocation as a trainer.

O'Brien won three races on Gale Force Ten for his father Aidan at an impressive 50 per cent clip, with the combination triumphing in the Jersey Stakes at Royal Ascot and the Listed Patton Stakes under lights at Dundalk in 2013.

O'Brien nearly had two successes on Gale Force Ten at the royal meeting, as they got to within a length of Reckless Abandon when second in the previous year's Norfolk Stakes.

Dom Carlos, unplaced in two earlier starts, was ridden to an easy four-length victory by Joseph's brother Donnacha O'Brien, with four previous winners among the six runners trailing them home.

The winner was bred by Philip O'Dwyer and PJ Walsh out of the winning Redback mare Fancy Feathers, whose Listed-placed half-sister Crafty Fancy is the only stakes performer under Dom Carlos's first two dams. He does, though, share his third dam with Doncaster Cup winner Pallasator.

Dom Carlos was a £45,000 Goffs UK Premier yearling purchase by his trainer, having changed hands for €34,000 as a foal at Goffs the previous November.

Following a brief spell with South African trainer Mike de Kock, Gale Force Ten returned to Europe to stand at the Irish National Stud, where he is standing his fourth season at an unchanged fee of €5,000.