International OFF THE MARK 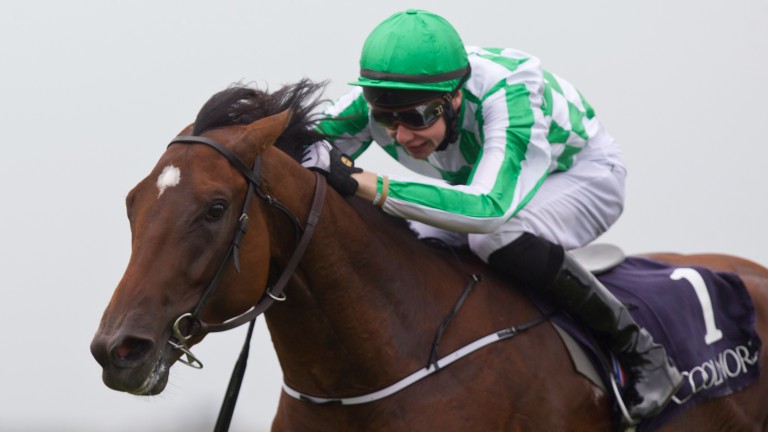 War Command: broke his maiden in June of his juvenile campaign
Patrick McCann
1 of 1
By Ollie O'Donoghue 4:45PM, MAY 8 2018

Tuesday turned out to be a red letter day for two freshman sires with both Anodin and War Command recording their first winners.

Isole Maldive won a valuable conditions stakes for two-year-old fillies over 1200m on debut at Capannelle to get War Command off the mark, seeing off the Footstepsinthesand filly Bridge Shanasand by a length and a quarter.

Trained by Cascione Melania and bred by Estero, Isole Maldive is the fourth winner from as many foals out of the unraced Hurricane Run mare Hairicin, a half-sister to Ballysax Stakes scorer Puncher Clynch.

She has also produced the Italian Listed winner Isole Canarie and has a yearling colt by Gutaifan and was covered by Adaay last year.

War Command broke his maiden in June of his two-year-old campaign and developed into one of the best juveniles in Europe in 2013, winning the Coventry Stakes at Royal Ascot, Futurity Stakes at the Curragh and Dewhurst Stakes at Newmarket.

Harmless, meanwhile, won a similar contest for colts at La Teste de Buch on his first start to become the first progeny of Anodin to return to the winner's enclosure.

Trained by Christophe Ferland for the Wertheimer brothers, Harmless saw off the Evasive colt Granacci by three and a half lengths.

Harmless is the second of three foals out of the unraced Pivotal mare Snowbright, who has also produced a three-year-old Equiano filly named Ghabnah - placed on both her starts to date - and a yearling Rajsaman colt.

Snowbright is a half-sister to the Grade 3-placed hurdler Mastermind, out of German Listed-winning miler Snow Gretel, whose half-brother Snow Ridge was second to Haafhd in the 2,000 Guineas.

Anodin, a brother to wondermare Goldikova, broke his duck on his three-year-old debut at Longchamp and subsequently placed five times at the highest level, including when second to Karakontie in the Breeders' Cup Mile in 2014.

Ballyhane Stud's Battle Of Marengo off the mark

We meet the man behind the first-season sire market

FIRST PUBLISHED 4:45PM, MAY 8 2018
War Command broke his maiden in June of his two-year-old campaign and developed into one of the best juveniles in Europe in 2013