French sires to the fore as Knight secures ‘magnificent individual’ 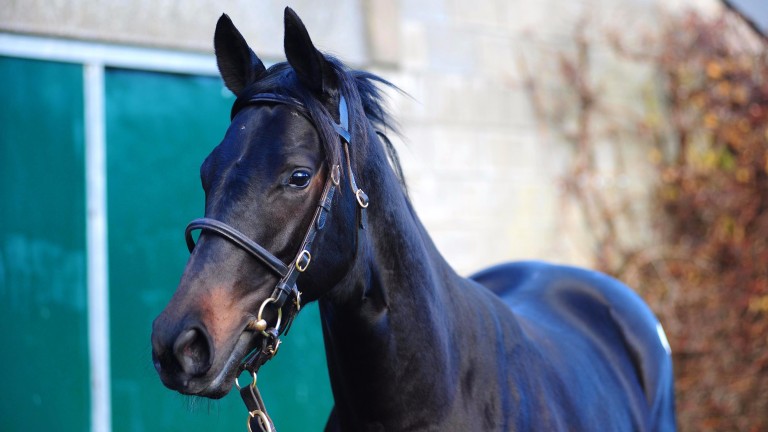 Desire for all things French, specifically yearlings by leading French sires, drove demand on the opening day of the Tattersalls Ireland November National Hunt Sale. Fierce competition for the progeny of stallions such as Martaline, Kapgarde and Saddler Maker drove trade with all key market indicators showing year-on-year increases.

The session dedicated to yearlings and older saw brisk trade for the choicest yearlings pushing the aggregate up by 11 per cent on last year to €1,393,200. The top price achieved on the day also jumped significantly by €21,000.

It was the offspring of Martaline who won the French popularity contest with the two yearlings who changed hands selling for an average of €60,500 with the top price of €75,000 given by Henrietta Knight for a gelding consigned by John Dwan's Ballyreddin Stud.

The trainer of legendary Gold Cup hero Best Mate would not be denied the gorgeous gelding despite the valiant efforts of Ian Ferguson and eventually the unnamed yearling was knocked down to her.

"I couldn't resist him," she revealed. "He is a magnificent individual and I am very fond of Martaline. He most likely will race, and will probably start off in Ireland. He is a lovely horse and whatever he does, he will go places."

As well as his undoubted good looks and ambling stride, the dark bay also has some classy genes. He is the second foal of Fantastic Cuix, a three-time winner in France and half-sister to Mont Rocher, a prolific Listed winner on the Flat in Britain and France. Another half-sister, Clizia, is the dam of Group One King's Stand and Prix de l'Abbaye hero Goldream and the granddam of the 2016 2,000 Guineas and St James's Palace stakes winner Galileo Gold, who retires to Tally-Ho Stud in 2018.

Cuixmala, the granddam of the sale-topper, is a half-sister to champion racehorse and brilliant sire Montjeu and to the dam of Again, victorious in the Moyglare Stakes and Irish 1,000 Guineas. It is also the family Group 2 winner and Prix Maurice de Gheest runner-up Aclaim, who begins his stud career at the National Stud in Newmarket in the spring.

Noel Meade and Gigginstown House Stud's recent Down Royal Grade 2 chase winner Disko, who was twice successful at the highest level over fences as a novice last season, became the latest star to advertise Martaline's potency as a sire of chasers. Desire for progeny by the son of Linamix - who is a full-brother to Reefscape, half-brother to Coastal Path and responsible for Grade 1 novice hurdle winner Bacardys - was insatiable on Sunday.

Frisby back for more

Richard Frisby, who pinhooked last season's Tolworth and Mersey Novices' Hurdle winner Finian's Oscar, evidently has a good eye and he bought the first Martaline gelding offered on Sunday. Consigned by Charel Park Stables and named The Crow, he is the second foal out of My Darling Rose by Cadoudal, a full-sister to Grade 2 Pendil Novices' Chase winner The Nightingale, who was trained by Paul Nicholls.

"I am delighted to get him. He is a very good-looking horse by a good sire and from a good pedigree. I look forward to bringing him back as a three-year-old," remarked Frisby. "I have a nice Martaline four-year-old called Good Man Jim who won his point-to-point at Dowth Hall two weeks' ago and is for sale at the Tattersalls Ireland Cheltenham sale on Friday."

My Darling Rose's first foal is a three-year-old gelding by Astarabad named Snowpiercer, who was purchased by Sean and Donnchadh Doyle's Monbeg Stables for €46,000 at the Derby Sale here in June.

Frisby also purchased Blade Runner, a son of Great Pretender and Listed-winning Kapgarde mare Cutting Edge. The French-bred gelding cost €44,000 from Peel Hall Stables and will, like The Crow, be offered for resale as a three-year-old.

Trainer Ian Ferguson lost out to Henrietta Knight for the Martaline top lot but he was successful with many of his other bids. He paid €44,000 for the only offspring of Kapgarde catalogued on Sunday - a gelding consigned by Ballyreddin Stud. Named Torngat, the chestnut gelding is a full-brother to the Hammersly Lake, a four-time chase winner for Charlie Longsdon, out of French Listed chase winner Loin De Moi.

A gelding from Saddler Maker's penultimate crop was keenly contested by bidders, with Ferguson securing Grave La Klass, the only Saddler Maker to sell on Sunday, for €40,000. The French-bred, consigned by agent Rathbarry Stud, is out of the winning Dom Alco mare Marbela, in turn the dam of winning chaser Twister Klass.

Apple's Jade added the Grade 2 Lismullen Hurdle to her ever increasing trophy haul for Gigginstown House Stud and Gordon Elliott at Navan on Sunday - another boost for the late Haras de Cercy sire.

"I am replenishing stock, and they will all go down the point-to-point route. I mostly buy foals, so I will be here for the next few days, but I also buy a few yearlings every year.

"You can't get any more Saddler Makers and Kapgarde is another very good, established sire. Henrietta Knight outbid me for the Martaline gelding. I loved him - I thought he was the star of the show."

Ferguson also bought the most expensive progeny of an Irish-based stallion when paying €36,000 for a gelding by Sunnyhill Stud's Doyen from Springhill Stud. The chestnut is the first foal of his unraced dam, who is a relation of multiple Graded chase winner Valley Henry.

"The Doyen is out of a Presenting mare which is something that appealed to me, and he looks an athletic horse, a very nice individual," Ferguson added.

Walk In The Park was the sire of the day's most expensive filly, a half-sister to Philip Hobbs' Champion Bumper third Wait For Me. Consigned by Peter Nolan Bloodstock, she was purchased for €32,000 by Marina Bloodstock.

Median and average prices tell the tale of the sale and both these indicators of how healthy the market is recorded increases on the 2016 set of figures. The average price of €12,656 grew by 11 per cent, up from €11,428 last year.

Filly out of Sprinter Sacre half-sister is a rare gem